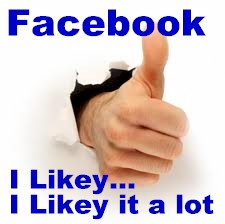 Facebook, the Social Network, has a new business model with designs on world Internet domination. This attack is on the search engine industry, and perhaps particularly Google. Although the plan is still in it’s infancy, Facebook has decided to head towards expanding its social platform to include the entire internet on its site.

Facebook’s “Search Engine” Model
Facebook’s ‘Like’ function is the central key to this new model. Instead of the ‘Like’ button being restricted strictly to it’s internal search to find Facebook friends, groups and profiles, this new plan will enable external content from the internet as well, rather than just Facebook results.

Facebook’s Open Graph protocol is based on how many people ‘Like’ a certain video, movie, article or a page on a website. So the more ‘Likes’ the site has, the higher the rank, and the more exposure it will get through Facebook’s search.

Does this sound a bit familiar? Well, that’s because this is the exact core algorithm that Google has used since their inception in 1998. The only difference is that Facebook plans to use ‘Likes’, where Google has based it on link popularity.

So if you have a blog or website, and haven’t yet implemented Facebook’s ‘Like’ badges, now is the time to do so. This will extend your websites content reach to the entire Facebook network as well.

An example of how the Open Graph protocol platform works is this. Say on a website like IMBD.com, which is that gigantic internet actor, movie and television database, you select a television show or movie from their database and click the “LIKE” button that’s next to the movie’s title, to show that you like and support the movie. That counts as one vote. The same also applies to a favorite song or local restaurant that you enjoy. 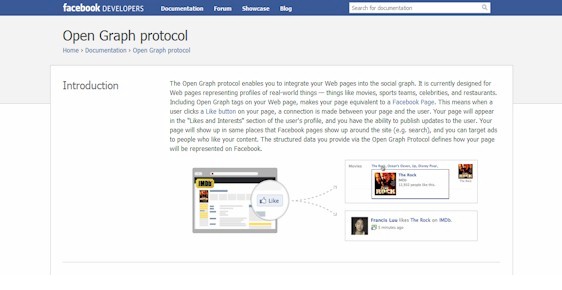 Facebook API For Developers
Facebook’s Open Graph protocol will provide a way for developers to integrate content using their social graph. The Graph API will be the next generation of Facebook’s API, and it’s aimed to provide access to various areas of Facebook’s social graph data.

Facebook is using this platform to show that Facebook isn’t just the only identity you have as a person. You can utilize the entire Internet to show off your personality likes. A lot more personal information however is going to be revealed, and thus will become accessible to the general public using the Open Graph. So using this new social tool requires a lot more user responsibility.

Facebook and Your Business or Website
You are most likely aware of the power that Facebook possesses, and realize how important it is for your business or website to have an online presence with this massive social networking hub.

Facebook has recently announced several visionary initiatives that will weave the existing internet as we know it with the social net. Although that may not seem too exciting, innovative or unique to you, what needs to be considered is the speed, as well as the scale in which it’s happening. This should definitely make Web professionals take notice.

Not to mock, but if you haven’t noticed, Facebook is big — Facebook is really really big. So big, that it will eventually be the great equalizer, the “one” that may eventually compete and challenge Google for ultimate consumer and revenue share.

The Open Graph protocol is a set of publisher plugins, along with a developer API, and a semantic markup. These three aspects of their platform, which includes the RDF-based markup and the plugins, may seem minimalistic in their separate parts, but when brought together, is a nearly realized vision of a fully personalized, social and semantic Web. The likes of which internet professionals haven’t seen since the term ‘folksonomy’ was the big buzz.

Easy
While the developer API, as well as Facebook’s support of semantic markup will quickly appeal to developers, Facebook has also made the Open Graph protocol easily accessible through their plugins. These social plugins by Facebook will enable your website to create a more personal and social experience for your website visitors, by easily just adding one line of HTML code. It’s strongly advised however, that you modify the privacy policy on your site to inform your visitors that Facebook’s social plugins are active and in use on your site.

Medium
Facebook has also announced a simple to use, RDF-based markup to make these plugins a lot more meaningful, as well as smarter. The Facebook semantic markup enables web publishers to state what objects are on the page (example: a book, or a movie review, or an event, etc.) This will automatically enable semantics, the understanding that the site user is not just interacting with a page on your site, but also liking a specific kind of feature. This can lead to the bucketing of certain objects and will provide for immense amounts of personalization, which may include, but not strictly limited to detailed
recommendations.

Advanced
Using Facebook’s new API is both streamlined as well as advanced, while making it easy to access permission based user information like profile data or friends, etc. All the calls are REST based and returns JSON objects.
For example, Profile information will be fetched as the following:
http://graph.facebook.com/joesmith.

The authentication is based on the OAuth 2.0 protocol, which makes it simple to connect as well as to prompt for permission to access user information. This new API will turn Facebook into a complete read/write storage of users tastes, and does not apply to just one user, but all Facebook users.

Facebook’s usage of the Open Graph protocol will have numerous implications for Web publishers, Facebook competitors, it’s users and the entire Web in general. As a Web developer, you should be focusing on offering tools that will increase relevancy for users, as well as supporting the interaction with content — wherever visitors are online.

Like Button
The Like button on Facebook will allow users to share pages from your website back to their Facebook profile, with just one click. The simple one line HTML code that you’ll need to integrate this is an iframe, and it can be placed anywhere quite easily. The best feature of the ‘Like’ Button plugin is that webmasters can easily customize how the link to the site that is “Liked” appears on a user’s Facebook profile, just by adding meta data for the title, site name, as well as possibly an image.

Like Box
Facebook’s ‘Like Box’ will enable users to Like your Facebook Page, and be able to view its stream directly from your website. With the addition of giving Facebook Page owners the ability to attract, as well as gain ‘Likes’ directly from their sites, users can also see how many others already ‘Like’ the page, and see how many of their friends Like it, as well.

Users will also be able to read recent posts from the page as well as ‘Like’ the page themselves, without needing to be logged into their Facebook account. You will be able to specify the exact height and width, the number of connections, and whether or not if you want to display the profile stream for the public profile.

Login using Faces
It only makes sense that users will be more likely to sign up for your website if they know that their colleagues or friends have already done so. So the Facebook’s Login with Faces plugin will show profile pictures of your user’s friends, as well as the ‘login’ button, for those who’s already signed up for your web site. Site owners will be able to specify the number of rows of faces to display, and since the plugin will dynamically size the height, it will show as many friends required to fill the rows specified.

The Facepile plugin will also show Facebook profile pictures of user’s friends who has already signed up for your website, but it doesn’t include the direct Facebook login option.

How To Build Natural Backlinks Back To Your Website