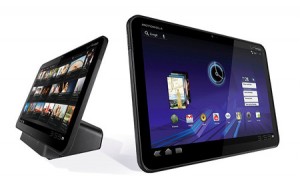 Drum Roll Please… as Motorola has unveiled their highly anticipated tablet PC, The Motorola Xoom, which is a 10.1-inch pure touchscreen tab, housed with the latest version of Android 3.0, Google’s mobile Operating System dubbed ‘Honeycomb.’ It made its debut at the Consumer Electronics Show in Las Vegas in January, 2011. There was once a time when computer manufactures were distinct from the mobile phone makers, but with the new tablets, that line is now non-existent.

Google’s Android software developers, working in conjunction with Motorola and chip maker Nvidia, has launched its Android 3.0 OS that’s specific for tablet devices. The development of the Android 3.0’s seems to have been fast tracked for use on tablet PCs. The Android software was originally intended for smartphones, but was found to be not completely compatible with the larger tablets interface.

On board the Motorola Xoom, is Nvidia’s Tegra 2 dual core processor, which is able to deliver up to 2GHz of processing power, according to a news release from Motorola. The new Xoom tablet is expected to be one of the first to offer serious competition to the Apple iPad 2.0.

The Motorola Xoom tablet will host a number of upgraded specifications, which may put the device a little higher in price than its competition. Motorola however, did not disclose any pricing during the CES show.

Two Digital Cameras
The Xoom will be housed with two digital cameras:
– A front-facing 2.0-megapixel camera. which also functions as a webcam for video chatting
– A larger, more functional 5.0-megapixel camera on the rear, for taking photos or 720p high-definition videos

The Xoom will be able to display 1080p HD videos, as well as being able to output HD video to other devices using a HDMI slot. The Xoom also has Adobe’s Flash Player on board, which makes it suitable for viewing videos on the internet.

Other Notable Features Of The Motorola Xoom Include:
– An e-Compass
– A Barometer
– A built-in Gyroscope
– An Accelerometer, and
lighting that’s adaptable for different apps.

The Xoom tablet, with 1GB of DDR2 DRAM, also has a built in 32GB hard drive for storage, which can be upgraded via the SD card slot.

Google’s Android 3.0 OS’s Not So Secret Code Name ‘Honeycomb’
The earlier versions of Google’s Android OS was originally developed and suitable for the much smaller smartphones. These 2.0+ versions did not however translate and work that well on the much larger tablet screens. The development of the Android 3.0, which is specific for the tablet devices, has quickly caught up with Apple’s iOS, which drives the iPhones and the iPad.

Market experts predict that Google’s Android OS, and Apple’s iOS will make up around 70% percent of the total market share for tablets and other mobile Internet based devices by 2013. BlackBerry’s OS for tablets, Hewlett-Packard’s Palm WebOS, Microsoft Windows and Intel/Nokia’s MeeGo, all combined, will take up the rest of the market share.

The Motorola Xoom is also designed to work with Google services, which includes the new version of Google Maps 5.0, featuring 3D interaction, as well over 3.5 million Google eBooks, and an ever growing countless number of apps made specifically for the Android tablet device.

The Asus Slider PC Tablet
The Motorola Xoom wasn’t the first to announce an Android ‘Honeycomb’ powered tablet at CES. Asus Computer also revealed their Eee Pad Slider tablet as well. The Asus Slider comes with a 10.1-inch touchscreen, which has a built-in, fully functional keypad that slides out, much like mobile phones with sliding keyboards, making for ‘netbook’ like typing. The Asus device is also equipped with the same Nvidia Tegra 2 dual-core processor as well.