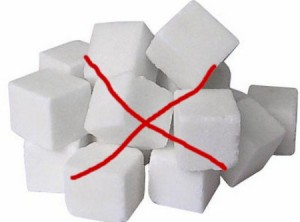 The latest studies show that all those non-nutritive sweeteners on the market may actually promote weight gain instead of inhibit it. So it’s recommended that you choose natural Sugar Substitutes instead as a healthier alternative. It’s just human nature that you’re wanting to take a big bite out of that luscious chocolate bar right about now, and not suffer any consequences. Our taste buds regardless of who we are naturally prefers something that tastes sweet.

[ad#co-1]
The problem is that anything sweet will usually contain high amounts of calories, which sets off a chain reaction of skyrocketing the blood sugar levels and ultimately weight gain. This not exactly a pretty picture when it comes to healthy eating.

Then came a variety of non-nutritive sugar sweeteners on the market, which for some time appeared to turn the sweetness-calorie equation into a complete tailspin. These chemical substances which were manufactured to replace sugar, had scary chemical lab names such as, aspartame, cyclamate, saccharin, and sucralose. They all tasted as sweet as sugar, but containing just a few calories.

So replacing all those fat laden sugar based foods with a low-calorie sweetener enabled anyone to enjoy as many sweet treats as they wanted, making it like a dream come true. They also promised to provide all of the required energy requirements as well. It made it seem possible for both our sweet tooth as well as our waistline to finally be satisfied.

Do These Sugar Substitutes Really Work
There’s a number of scientific studies which are showing that the consumption of these various non-nutritive sweeteners may actually promote weight gain. A study on laboratory rats showed that those who consumed non-nutritive sweeteners actually increased their food intake and thus began to gain more weight than the others who consumed actual calorie-rich sugar.

Other tests proved that these low-calorie sweeteners may not quite be the diet miracles that they promised to be. One test conducted on over 50,000 women found that the various non-nutritive sweeteners were more than likely to pack on more pounds than non-users. A longer term study showed that those who consumed artificially sweetened beverages were much more overweight and obese.

So the actual mechanism on why these low-calorie sweeteners leads to more weight gain is still a puzzle. One of the theories is that when one dissociates sweetness from actual calories, what non-nutritive sweeteners will do is confuse the body’s regulatory mechanisms.

So when someone tastes something that’s sweet and it contains just a few calories, the taste then fails to evoke the usual psycho-biological response which serves to regulate the actual energy balance, and then fails to signal when to stop eating the sweets.

Another explanation may be the association between non-nutritive sweeteners and weight gain, and that the artificial sweeteners changes the intestinal environment while triggering the inflammatory processes which are associated with certain metabolic disorders. While there’s only a few studies which have explored this theory, it’s entirely plausible that a change in one’s intestinal bacteria could possibly promote fat storage resulting in weight gain.

Also, the recently discovered sweet-taste receptors in the stomach might just explain the association between non-nutritive sweeteners and weight gain. When there’s certain gut receptors which senses real sugar, they will then trigger the release of hormones which stimulates insulin secretion along with a feeling of satiety. Studies have shown that glucose, and not the non-nutritive sweeteners, may be triggering these normal hormonal responses.

Regardless of what actual mechanism is actually responsible for the weight gain, one thing is certain, and that is non-nutritive sweeteners does indeed promote weight gain.

Try Natural Sweeteners Instead
So the next time you’re looking for some alternate sweeteners or are considering a sugar replacement, try a natural alternative.

Honey
Honey is actually a chemically complex food which has over 180 different components. Honey is an excellent natural source as well as being a highly versatile sweetener and substitute. Studies have proven that pure unpasteurized honey is able to naturally inhibit the effects of toxic substances which are present in the body. Honey can be drizzled over yogurt, fruit, cereal, tea or desserts, and also be used in baking and cooking.

Maple Syrup
Maple syrup is a natural sweet substance which is derived from the sap of Maple trees. It contains fewer calories as well as a lower glycemic load than does honey. It’s also an excellent dietary source of zinc and manganese. Its distinctive naturally earthy and sweet taste will pair perfectly with waffles and pancakes, which is the most popular use. Natural maple syrup is also used as a sweetener in baked goods and desserts.

Stevia
Stevia is a natural sugar substitute which comes in powdered form when extracted. It’s derived directly from the Stevia rebaudiana shrub. Unlike the other natural sweeteners, Stevia is extremely low in calories as well. Stevia is available in health food stores, provided that it doesn’t make any health claims on its label.

How Engaging Social Media Helps For Marketing Your Business