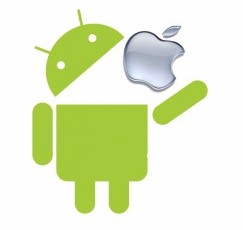 As with all of the previous iPhone updates issued by Apple, the latest iOS5 release seems to be playing a game of catch-up with the majority of their competitors, particularly Google and their Android OS. All this while Apple continuously adds usable relevant features such as the ability to integrate with Twitter, along with online storage capabilities through their new cloud computing service, iCloud.

But would these latest updates really be enough to be able to solidify Apple and their iPhone’s rank as being the best smartphone available on the market? Most industry experts are beginning to think that it’s not. Although it is pretty obvious that Google’s Android has several significant features which the iPhone definitely lacks, it’s up to you as the end user to consider if these features are significant enough for you to reconsider converting over.

The Availability Of Voice-Guided GPS Navigation
All of the Android smartphones offer a voice guided GPS navigation system which has been a free service for a few years now. Apple and their GPS navigation for the iPhone, which is their Maps app, requires their users to look directly at their iPhone handsets and then read the map on the screen for directions while they’re driving, taking their eyes off the road.

Although the iPhone does have third-party apps which will give voice activated “turn left here” or “turn right here” guidance, such as Mapquest’s popular app, but the Android’s built-in system allows their users to directly use the detailed GPS navigation feature by just tapping address links found on other apps. Using the iPhone however, you’ll have to manually copy and then paste the street address into the app of choice, which kind of takes your hands off the steering wheel.

The Ability To Set Default Apps
[ad#co-1]
The Apple iPhone’s lack of a native voice activated GPS navigation system would not be much of an issue to you, if you’re able to set any of the third-party apps as the default to be able to run certain functions.

On the Android OS, if you’re wanting to use any alternate apps for say email, browsing the Web, or for GPS navigation purposes, you’re able to set any of these apps as the default for using these related functions.

For example, if you’re wanting to set Dolphin HD as your default for browsing the Web on the Android, you can do so and then it will automatically open all of the links from the other apps that you’re using in Dolphin as well, instead of the standard Google Android Web browser.

It may to some be a subtle feature, but it does allow for complete customization of your smartphone a lot more easier on the Android OS, as compared to the proprietary iPhone.

Expandable Voice Commands
The rumors were out there of possible expanded voice commands on the iPhone were going to be made available in the iOS5, but that did not quite pan out. So as of now, Android currently provides a few more voice command options which are built directly into their operating system.

Android users are able to verbally dictate their emails as well as their text messages, along with getting directions by just speaking to their smartphones. The Android users are also able to load their favorite music into any third-party app, such as say Pandora by using the “listen to” voice command. The iPhone’s music-by-voice feature however, is just linked to the iPod application.

Widgets Rule
You’re able to display your favorite or your most popular information that are most important to you as widgets directly on the Android driven smartphones home screen. Information such as breaking news or the latest sports score, media playback controls or any incoming messages.

But keep in mind that placing too many Android widgets can add unnecessary clutter on the screen of the smartphone, but if you’re able to place just the exact widgets which are important to you, that will save you a lot of time as well as presenting you with vital information which you may have otherwise overlooked.

The Variety Of Hardware Choices
With all of the software features combined with the abundance of apps aside, Android provides the consumer with a large variety of hardware choices for smartphone buyers.

This includes handsets which has bigger screens or built-in physical keyboards, along with other features which are not available on the Apple iPhone, such as dual-core processors which are now available on some of the Android phones. Although the hardware on the iPhone 4 is excellent, but because of these reasons, it may not be the exact fit for you because of all of Apple’s limited “exclusivity” features.