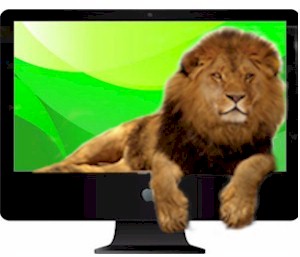 When Apple originally introduced the iPhone and then the iPad tablet, they transformed how people viewed and operated portable digital devices which relies primarily on navigation and the manipulation of items by just using finger gestures.

Gone are devices such as the mouse and scroll bars. The App icons are available directly up front and center and are not buried somewhere in a file or limited to being placed at the bottom of the screen.

Apple is now moving forward by introducing the same concepts to their desktop PCs by radically changing their Macintosh operating system. This new OS, which is called the OS X Lion, is now available for purchase. The single one time purchase allows you to install the software on as many Macs as you want.

[ad#co-1]
The Lion Leaps Tonight
The OS X Lion can be viewed as a quantum leap forward as it’s basically a merger of the desktop PC OS and the more portable post-PC mobile devices such as the smartphones and tablet PC. It now demotes the scroll bar originally found along the side of documents and windows, rather instead relying on direct manipulation of lists and documents.

The Lion also eliminates the need of having to save your work as it will automatically save the latest versions of every document created. It will also begin programs right where you left off last. The OS X Lion has the ability to elevate the roles that multi-touch gestures plays, along with adding new ones.

No It’s Not Purely Tablet Like
The new OS won’t however turn a Mac PC into a tablet. It will still retain the traditional computer based features which are not available on the smaller portable devices, such as multiple windows, the usual file system and the use of a physical mouse and keyboard.

The OS X Lion will still be able to run traditional Mac based programs, as well as still being able to handle Adobe Flash, and no, it’s not capable of running any iPhone or iPad apps. It won’t turn the Mac PC into a pure touch screen, but instead continues to operate as a touchpad.

Overall, it’s a significant change and upgrade. The Lion OS also represents a harbinger of things which are still to come. Apple’s OS rival, Microsoft, is working on their own overhaul of the traditional Windows PC OS, which is expected to be released in 2012. It’s also expected to adopt the multi-touch technology as well as other similar concepts which are borrowed from the smartphones and the tablet PCs.

Some Of The New Features Of The OS X Lion

• Auto-Save Feature
Any apps which are still running in the OS X Lion will automatically save itself once every five minutes or whenever you decide to pause. There’s also no noticeable interruption when this happens and obviously, you’re still able to save everything manually.

Although this isn’t exactly a new idea, but the implementation is slick and sleek and is able to work on all of the programs. The best feature may be that on each of the auto-saves, it will create a “version” of the document and you’re able to view these in a “stack,” which are arranged by date and placed behind the latest version.

You’re also able to swap back and forth to older versions, or copy and paste text back and forth. These versions are also created by storing the latest changes, all behind the scenes, and not by having to create numerous files.

To prevent it from auto-saving, you can just lock a document and, for privacy purposes, when you’re wanting to transfer or share the document, just your latest version is either copied or sent.

• Resuming
If you happen to relaunch a program, any document that you were previously or originally working on will appear, even with the cursor exactly where you left off. If there were any highlighting, that’s preserved as well. If you happen to restart your Mac, all of your programs are then resumed in the same manner, unless you specify not to do so.

• Apps On A Full Screen
You’re able to launch apps, or any individual browser tabs, and it will display fully on the screen, this by clicking on the icon that’s located on the top right hand corner. When in full screen mode, the menu bar as well as the other controls will be hidden unless you decide to move the cursor to that top area of the screen.

• Mission Control
One of the best features on the Mac PC was called Exposé, which displayed miniature versions of all of your open windows with one click. Now, it’s known as Mission Control, which performs the same exact thing. It will also display full screen apps or extra desktops as well.

• Gestures
The Mac already housed an assortment of similar iPhone gestures which you could perform using the touch pad. The OS X Lion however has decided to change some of these features while at the same time, adding more.

For example, you can just double tap using two fingers to easily resize one section of a PDF document or a page on a Website, so it will zoom in and just show that portion of the page, filling the entire screen. This feature is similar to the iPhone and the iPad. Calling up Mission Control or Launchpad however, requires zooming or pinching by using three fingers including your thumb, which can be a little awkward.

• Apple’s Mail App
The Mail app has been completely overhauled. It now looks as well as works similar to the Mail app which is available on the iPad. One of the better features is that it works great in optional conversation mode, which combines as well as numbers each message in a thread. It will also hide duplicate emails as well.

This Lion Just Roars
Two of the latest major PC operating systems which were released recently was Apple’s Snow Leopard and Microsoft’s Windows 7, and the upgrades were pretty incremental. The OS X Lion however goes completely beyond that.

It’s more of a monumental jump, and now gives the Mac an updated modern look as well as feel in a world which seems to be rapidly shifting towards the portability of the smartphones and tablets.

So if you’re willing to adjust a little, you will then realize that it’s just simply the most advanced computer operating system that’s available, so once again, well done Apple.

How Google+ Plus Impacts Business Marketers And Branding