The HP Compaq 6000 Pro Series PC Desktop is an “All-In-One” enterprise grade computer which is designed to save space in this cluttered office environment that we live in. These units are ideal for home based offices as well as for small to larger business offices. IT departments traditionally cringe however when one mentions an “All-In-One” PC because of the usual lack of internal access for repairs or upgrades. 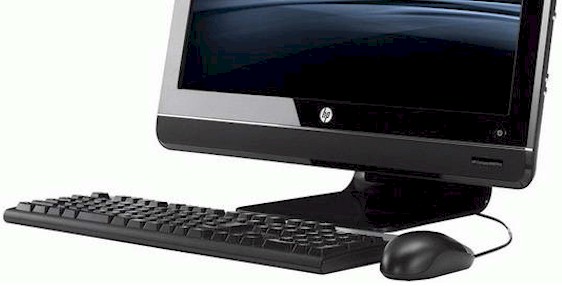 Some of these “All-In-Ones” initially may experience a difficult time fitting into the home office or business realm. While they are convenient because of their excellent space saving capabilities, the prices of these units are generally a little more pricier than the conventional similar featured PC tower. But the prices usually average out as these towers also require a compatible monitor as well, which is an additional cost.

But what may be more important is that the actual design of the thin chassis and frame on the majority of these “All-In-Ones” is inconvenience, as they usually have limited and difficult internal access, this alone turns off home based business owners or IT departments who are wanting to access these boxes to be able to perform upgrades.

The HP Compaq 6000 Series Pro
This particular HP computer joins a limited list of strictly business orientated “All-In-One” desktop PCs. This desktop to many is a cost effective solution when compared to the other available enterprise grade or ‘consumer-oriented’ desktop “All-In-One” computers that are available on the market. The brand name reputation as well as the quality and features of this computer justify the price.

The HP Compaq 6000 “All-In-One” Offers Internal Access
One of the best features of HP Compaq 6000 Pro is that once you lay the unit face down, surprise, you can pop open the rear panel by using a flat head screwdriver. For the majority of the “All-In-Ones” as mentioned, most IT personnel dislike these types of computers because of the lack of access for repairs or upgrades, but not so with this model. Although it’s not as convenient as the Lenovo ThinkCentre M90z access, which just pops open, but it’s a rare and a convenient feature for any “All-In-Ones” that comes available with a removable back cover.

IT departments realize the importance of being able to access the interior of any desktop PC. As with those big black bulky tower computers, which allowed for manual access by just opening its cover allowing you to tinker and prod inside. This allows for being able to make quick and cost-effective upgrades and repairs. This without having to take it back to the manufacturer or the store where you bought it from.

The HP Compaq 6000 Pro isn’t as amenable as the big tower PC platforms, but it’s features are far ahead of most other “All-In-Ones” out there in the same category and price range. You will be able to swap out and upgrade the RAM, install a bigger hard drive or the optical drive by just removing the rear panels.

Although there isn’t any room to add say any additional components, but if you need to replace that built-in DVD-burner with a Blu-Ray drive, then you’ll be able to do so. This model is also VESA-mount compliant, which means that you can secure it too a wall using mounts or strap it on to an articulating arm.

The Display And Storage
The horsepower that’s available behind this 21.5-inch display screen of the HP Compaq 6000 Series Pro model is:
• An 3GHz Core 2 Duo processor, which is an absolute stalwart of a CPU, yet perhaps a little outdated
• This is coupled with an adequate 4GB DDR3 RAM which has earned a WorldBench score of 116. So from a performance and speed standpoint, this score puts this particular model right on the top of similarly priced “All-In-One” computers
• The storage capacity for some may not be that impressive, as it offers a 500GB hard drive, where some consumer based competitors has closer to 1TB

If you’re working out of your home or from a small business type of setting that relies on using network storage or even cloud computing, then the size of this hard drive may not be an issue, but it is important to keep the capacity limitation in mind.

The Graphics
As the HP Compaq 6000 Series Pro is considered as a genuine business enterprise desktop computer, this “All-In-One” operates on the 64-bit version of Microsoft Windows 7 Professional. The graphics performance however is rather positively surprising. This machine is complete with a Nvidia GT 230 GPU, which is a significant upgrade from the usual integrated Intel graphics that this manufacturer usually supplies. It actually offered close to 35 frames-per-second on benchmark tests, which is excellent. It offers a 1680 x 1050 resolution on its highest settings, which beats its competition in this category by a large margin. HP Compaq’s 200 ‘All-In-One’ actually posted suitable playable frame rates.

Gaming capabilities are not generally tested when it comes to business based desktop computers, or for any other “All-In-Ones” for that matter, but the HP Compaq 6000 Pro’s above average performance does score well for anyone who’s looking to perhaps getting into a bit of work that may be graphics-intensive.

The display quality on the screen is fine, as there really isn’t anything too spectacular to play with here. The reproduction of color is pretty accurate, though not especially that vibrant to some. The brightness controls are located on the right side of the monitor, which is adjacent to the built-in DVD-burner. The video playback is absolutely flawless, which is to be expected because of the excellent graphics hardware. The built-in speakers produce average to adequate sound, but while the volume is turned up, they don’t really seem to quite fill the entire room, which may be fine for a home or office environment. Overall, they sound just fine, although a bit more bass would of been nice. The audio itself was crisp and clear.

Not A Touchscreen
This particular “All-In-One” model however is not a touchscreen. If pressing your fingers at the screen is vitally important to your work tasks or workflow, there are other units such as the Lenovo ThinkCentre M90, which offers a true multi-touch screen display, which is also in a larger shell.

HP Compaq 6000 Pro’ Connectivity
The HP Compaq 6000 Pro’s connectivity options are adequate to good for this particular unit. Located on the left side of the computer, you will find a multi-format card reader as well as two USB ports. Also located in the same area are the microphone and headphone jacks, as well as a four-pin Firewire port.

The rear of the PC and monitor offers five more USB ports. If you are concerned about security and want to disabled them at times, there are also PS/2 serial connectors for connection to a keyboard and mouse. The audio visual aides comes with a Display-Port, along with an audio output jack as well. The Gigabit Ethernet port comes with a built-in 802.11n connection, and both are standardized complements for this category of computer.

HP Compaq 600 Pro – Recommended
The HP Compaq 6000 Pro does not offer too many extras. The accompanying bundled mouse and keyboard are wireless, via USB. They itself are pretty much your standard HP products, but why expect more? The keyboard offers a few media playback controls, while the mouse is, well… a generic functional mouse.

Where Can You Buy The HP Compaq 6000 Pro “All-In-One” Desktop PC?
You can purchase this HP Compaq 6000 Pro “All-In-One” Desktop PC from Amazon. At the moment they will include free shipping, and when comparing other prices with the other online merchants out there, Amazon does currently have the best deal available, especially with the free shipping.
Click here to view on Amazon

Where Can You Read More Reviews for the HP Compaq 6000 Pro “All-In-One” Desktop PC as well. The best place for reviews from those who has actually bought this product is available.