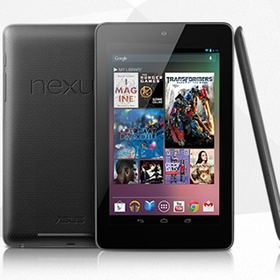 Google has recently revealed their 7 inch Nexus 7, which is expected to sell for $199. This price point is the same as the popular Amazon Kindle Fire Tablet, and thus Google is not going up against the almighty standard, the Apple iPad, but setting its sights on the Amazon tablet.

This introduction by Google, shortly after Microsoft’s announcement of their MS Surface tablet, are the dominant players which are beginning to define this competitive market.

Google’s has decided to go the smaller screen and budget friendly route. The compact 7 inch tablet, which will be manufactured by Asus, is expected to have any extremely friendly selling price.

The size is identical to the Kindle Fire tablet while being significantly less expensive than the iPad or the Samsumg models. Microsoft is yet to reveal the price for its Surface tablet.

Google Nexus 7 Technical Specifications
The Google Nexus 7, is expected to be available sometime in mid – 2012.

Google is expected to offer the Nexus 7 for purchase at its Google Play marketplace.

Microsoft Surface For Businesses Google Nexus 7 More For Entertainment
It appears that the MS Surface will be targeted more towards the business crowd, while the Nexus 7 is geared more for entertainment purposes.

The Nexus 7 design is suitable more for gaming and entertainment, as it features a quad-core processor offering excellent performance capabilities. It also offers other gaming related functions, such as, an accelerometer and a gyroscope, allowing for full tilting and tapping of the device.

The accelerometer is the biggest indicator that this particular tablet is geared more towards entertainment, as it’s capable of instantly re-orientating the display between vertical and horizontal settings.

Perhaps the best news Google disclosed is that there’s soon expected to be over 500,000 apps, including games, which will be made available at Google Play.

The Microsoft’s Surface appears to be a flat more user friendly alternative to a netbook. It offers a larger 10.6 inch display and is heavier in weight at close to 2 pounds. The device also includes a cover which is capable of swinging over, to emulate a full functioning flat keyboard. It’s complete with a track pad which users can type on as well.

So Google rather than competing with the Surface tablet, is targeting their device to go up against the Amazon Fire. It has a comparable price tag, the same smaller screen size, and a similar marketplace.

Google Taking Lessons From Amazon
It also appears that Google is taking survival lessons from Amazon by deciding that the only way they can take a chunk out of the iPad is to cater to a market that’s looking for a smaller, and a more affordable tablet. Apple however is rumored to offer their own version of a smaller tablet later this year to fill the gap.

The attempt is to grow these users to be dedicated Android-powered device followers, and they adopting Google powered products and services from their Google Play marketplace.

The ultimate solution is expected to be a growing selection of Android gadgets, products and services available for their platform which can eventually compete with Apple.

However, some experts are claiming that Google may initially find it difficult to compete with Apple and even Amazon, and their already established digital marketplaces. This particularly because of Google Play’s current lack of apps available for the tablet.

Google Needs To Grow Their Marketplace
The user base for Google is not as large or established as what Amazon or Apple currently has, and it’s also expected to take a while to build this customer base as well. The biggest challenge of the Nexus 7’s potential success is the current lack of services which are optimized for the Google tablet to develop a user base.

Amazon, for instance, currently offers what’s known as the “Amazon Prime Program,” for $79. What this includes is a free 2 day shipping service for all their physical goods along with lots of free streaming content that’s available specific for the Kindle Fire.

A service similar to this is something which Google currently doesn’t offer. One thing that Google does offer, however, is its dedication and manpower to compete with Amazon, and their hopes to eventually overtake them, which is their goal.

Google is also aware that Amazon currently holds the crown position when it comes to Android tablets, all this without using any of Google’s services, as the other Android tablets do. So Google is making their best possible and strongest push to dominate this market space.

Tablets Slowly Overtaking Laptops
It’s estimated that consumers are continuously turning in their expiring laptops and netbooks for a new and shiny tablet. So as a result, it’s expected there will be close to 750+ million tablets on the market by 2015.

There’s also predictions that the base operating systems on these tablets in the next few years will shift as well. Currently, Apple and their iOS commands close to 70% percent of the market, the Android OS holds 16%, and the balance going to the others.

It’s expected however for the market shift to eventually be, 50% percent for the iOS, Windows OS making a push with 20% percent of the market, and Google’s Android OS with 15% percent, this by 2015.

Creating Videos For Your Business That Glues Eyeballs To Screens