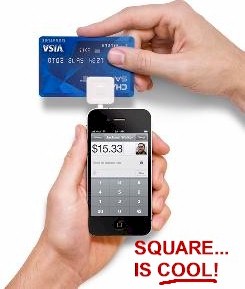 Regardless of the type of Smartphone you own, there is no doubt that it’s the availability as well as the selection of apps, is what makes the mobile device great. So whether you use apps from Google’s Android Market or from Apple’s App Store, it’s a daunting task for you to decide which are the best apps that you need to improve your productivity at the office.

So a survey of opinion was taken on what the favorite apps were to use in the workplace. Listed are the most popular apps for smartphones which run on: Apple’s iOS, Google’s Android OS, Windows Phone 7 and others.

The Best Smartphone Apps To Use At The Workplace

The “Square” App
Say that your having a weekend Garage Sale, or you’ve set up a stand selling fruits and vegetables at the local Farmers Market. In the past, you needed to be a “Cash Only” business since accepting credit cards used to be a problem as using wireless scanners were extremely expensive. Well, not any longer if you’re using the Square App.

What you do is download their software, and then they’ll send you (for free) a small plastic square which plugs directly into the headphone jack slot of your smartphone.

You’re then able to instantly process charges for all of the major credit cards such as VISA, MasterCard, American Express and Discover. The fee for processing the transaction are also less than any competing service as well. There is also no monthly minimum of usage or no per-swipe charge.

The percentage that you pay from making each transaction is competitive if compared to the other services on the market. The entire program is also easy to use: you just enter the amount into the app interface and then just swipe the CC, the customer will then “sign” the touchscreen of your smartphone.

You’re able to send a receipt directly to the customer via e-mail, which shows the date, the time as well as location of the purchase that they just made. You’re even able to include a photo of the product just purchased for proof. The cash that you collect goes directly into your bank account the next day.

This is the easiest as well as the most convenient and affordable way than any other payment alternative out there. The Square App is an excellent combination of what an app and a needed service can do.

The Square App is available for both the iOS and the Android OS
Price: The App is Free; then there is a charge of 2.75% per swiped transaction, or a 3.5% plus $0.15cents for all keyed-in transactions

Dragon Dictation App
The Dragon Dictation app allows you to be able to dictate messages or memos by talking directly into your smartphone. Then you’re able to send the text by email, SMS message, or you can post directly on Facebook or Twitter.

Using this app is easy. Just Click on the “Tap and Dictate” tab and then start speaking slowly as well as clearly. It may not always be 100% accurate every time, especially if you happen to speak too quickly, as it’s likely to jumble some of the words together.

It is however surprisingly accurate most of the time. If you’re wanting to clean up your message that you’ve just dictated before sending it out, you’re able to do so by just pressing the small keyboard icon and then retyping in any corrections.

The Dragon Dictation App is available for the Apple iOS
Price: Free

Quickoffice App
There are quite a few “Office Suite” type of apps which are available for the different smartphone platforms. The Quickoffice app is one of the best available. It’s available in multiple variations which offers various price points.

The free version of the app is pretty much limited as it just allows the viewing of a few of the Office documents. The “Mobile” app ($4.99) as well as the “Connect Mobile” app ($9.99) versions, which are available for the iPhone allows for full editing of MS Word and Excel files using a clean and easy interface.

The difference between these two apps is that the Connect Mobile allows you to access and then share files using all of the common cloud services including Google Docs or Dropbox, so the extra $5 is worth it.

There’s also a version for the Apple iPad for $14.99 which also adds support for creating as well as viewing PowerPoint docs, making excellent use of the iPad’s larger resolution screen.

The Quickoffice App is available for the iOS, as well as for the Android, Symbian, webOS and the BlackBerry
Price: Free version up to $14.99

Evernote App
In this brain overload of information era that we now live in, the Evernote app helps you in keeping track of all your data. This service will store all of your Web pages, files, images along with your own personal notes.

The Evernote App will then sync the database across multiple desktops as well as the cloud allowing you to search your data by content or by tag. It will perform optical character recognition as well on text within images.

Although the mobile app version doesn’t have all the features as the desktop version, but it does however allow you to add or tap in your stored Evernote information. The only difference is, you will need an internet connection to access your data, where on the desktop version of Evernote, you don’t.

So if you’re wanting to store an image, it will also store the text on the photo as well, if there is one. You can also scan business cards and then import them directly into the Evernote app, and then search for any text that’s on the card.

The Evernote App is available for the iOS, Android, Windows Mobile and BlackBerry
Price: Free

MindNode App
If you’re into mind-mapping, this app is simple to use, it’s unobtrusive and it doesn’t interrupt your stream of consciousness. The MindNode app has an easy interface which is excellent for brainstorming as well as developing ideas and various projects effortlessly.

The MindNode app eases the transcribing as well as the development of ideas. You can use this to create outlines for writing articles or planning out IT projects and all of its requirements. MindNode makes all of this easy.

The MindNode App is only available for the iOS
Price: Free

Springpad App
The Springpad app can be viewed as the digital version of a wallet or a purse. If you suddenly have any new random thoughts, then you can store it in the Springpad app. Are you wanting to record audio? Save a favorite bookmark? then Springpad’s the app.

You’re able to scan bar codes or take some photos for storage which you can quickly access later, either from your mobile or from the Web. This app is extremely user friendly as well as visually appealing.

For example, say that you’re wanting to bookmark a YouTube video that you’ve just watched, you can do so easily and just label it “Must watch again.” You can use this virtual “Swiss Army Knife” of an app for much much more. Unlike all of the saved receipts or other pieces of paper which bulks up in your actual wallet, the pile on the Springpad app is a lot more sortable by date or search.

The Springpad App is available for the iOS and the Android
Price: Free

VIP Access
If you’ve ever used either of the two-factor identity credentials, like the SecurID, keyfobs from RSA, then you fully know that it’s pretty easy to either misplace them or forget them at home when you’re traveling.

So a better alternative may be using software token credentials which are stored on your smartphone. Symantec’s VeriSign Identity Protection provides an easy means to the two-factor authentication which can be used for a variety of purposes such: Login’s for the Web, email and VPN network remote access.

Once you register them into your account, you’ll then bring up the app on your smartphone and then you enter the six digit code which is timed to authenticate yourself.

If you use eBay with VIP or PayPal, there are no fees when downloading the app or using it. For other services however, such as if you’re wanting to integrate the service with your banking app, or wanting to use it as an access to your VPN, then there is a user fee.

VIP Access App is available for the iOS, Android, Windows Mobile and the Blackbery
Price: Free, along with the fees which apply and varies, depending on the service