Why Induction Stove CookTops Are Hot – A Guide
Skip to content 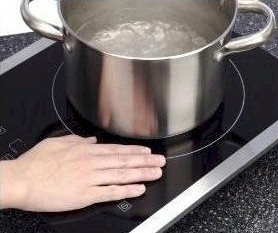 So you have most likely seen or heard about them, or use an induction stove cooktop yourself. They are those sleek looking, space age smooth glass like surface cook tops, where seemingly the magic cooking happens. You can cook food on an induction stovetop, while there is no visible flame or heat, the surface looks like a perfectly cool surface.

Induction stoves are easier to clean as well as being available in different types of finishes and colors. They will fit in a variety of decors to match your kitchen. At first glance, they may appear like a regular “smoothtop” electric or gas cooking surface, but that’s where the similarity ends. Yes, those other smooth top surfaces also offers a sleek and easy to clean surface as well, but induction cook-tops represents a completely different way of preparing food.

Induction stoves uses what’s known as “resistive heating” technology, which most are unfamiliar with. It’s not however a brand new high tech way of cooking food, as there has been examples of induction based cooking far back as the early 1950s. There were also a few commercial models which were available in the 1970s.

One demo involved a pot of water that was being boiled with a sheet of paper placed between a pot full of water and an induction cooking device. The water eventually began to heat up and was brought to a boil in a few minutes.


So What Exactly Is Induction Cooking?
When using an induction cook top, the heat isn’t created on the element itself, similar to how electric or gas ranges work. Instead, the heat to cook the food is generated and transferred directly on to the cooking utensil itself. This is possible because of the resistance of the electric current flowing through the coil beneath the cook top and then connecting and heating just the pot or pan.

So simply put, induction cooking is a result of resistive heating of the cookware itself. Using a conventional stove top, whether it be an electric or gas flame, the heat has to be generated first before that heat is transferred to the pot or pan to cook the food. Induction cooking skips the heating process of electric or gas ranges, and just heats up the cooking device (pot or pan) instead.

The result is you get hot cookware with evenly cooked food, while maintaining a cool as well as a clean stove top surface. The only heat that’s on the cooktop is what’s been transferred directly from the heated cooking vessel to the stove top’s surface. The residual heat that’s generated will eventually dissipate rapidly.

So What Are The Requirements For Inductive Cooking
What induction cooking requires is specialized cookware, (you knew there had to be a catch,) or at the very least, standard cookware that has a base which contains a high iron content. Aluminum or glass cooking vessels will not simply heat up when placed on the induction surface, since the bottom of the pot or pan needs to contain some type of magnetic ferrous metal.

This is the type of metal where a magnet will stick to. So to test if your cookware will be usable for induction cooktops, take a magnet to see if it will firmly stick to the bottom of the pot or pan. So your thick cast-iron skillet that you are using now, should work just fine. What will also work are the majority of cast-iron cookware that has been coated or treated with porcelain or ceramics. As with all of these induction stoves, heating will usually occur a lot more quicker as well as heating the cookware a lot more evenly provided you are using a perfectly flat base or bottom.

What Are The Advantages Of Induction Cooking
Induction cooktops are generally a lot more efficient than any other forms of stovetops, the most common being electric or gas. This is because induction cooking will heat just the cookware itself and nothing else. This instead of conventional stoves heating up the cooking element first, and then transferring that heat to the pot or pan. So due to it’s efficiency, the stovetop will always remain cool, while the cookware heats up. This will mean less overall heat in the kitchen, as well as obviously being a lot safer especially if you have kids or pets.

The heat that’s generated by induction cooking can be precisely and automatically set, and can also be regulated. The heat adjustments are immediate as well.

Induction Stoves Are Faster As Well As Safer
The overall efficiency when cooking with an induction stove will also result in faster cooking times. A pot of water on an induction stove top will usually begin to boil in approximately half of the time then a standard electric or gas stove. This is because there is no heat loss during the transfer process from the cooktop to the cookware. Instead, the pot or pan is heated directly and immediately.

Inductive cooking is a cleaner, much safer and faster way of cooking, while keeping your kitchen cooler. And since induction heating only heats ferro-magnetic surfaces, there are less burned fingers as well as quicker meals.