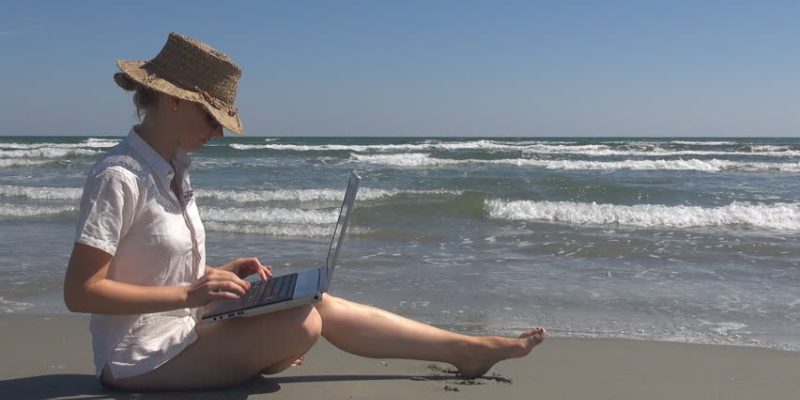 At some point in our working lives we eventually ponder. “Is this it, is this all there is to life? To worship the almighty dollar so I can survive another day?” What most will do in this condensing economy on a daily basis, is exchange their time for money.

The money they earn, becomes dependent on how many hours or how efficient they are at their job.

Then at the end of the week or month, they get paid for their efforts, which they can spend however they choose. This paycheck to paycheck living, is a reflection of the direct sweat equity they put in.

For those who are wealthy or about to become wealthy, their mindset on this type of monetary exchange, is far different.

What they’ll do instead is get their money to work for them, instead of they working for the money.

The Need To Work For A Living

The almighty paycheck rules the poor mans kingdom. The money earned is dependent on showing up for work on time, and performing the prescribed task of their job.

If a day of work is missed because of illness or an emergency, then there’s usually no money earned that day.

Another common form of pay, is the monthly salary. This is similar to getting paid hourly, except the pay rate is set per month.

So regardless of how many hours of work are put in during that month, the money earned remains the same.

Overtime pay usually isn’t available for salaried workers, but may receive a bonus at the end of the year.

Most who are in management related positions, work on a salary basis.

They will also routinely work more than the usual 40 hours per week, under this arrangement.

Everybody’s Working For The Paycheck

This working for a living is the common mentality we’re conditioned to, when it comes to earning a living. Thus the rat race. It’s instilled into our mindsets when growing up.

This is what we witnessed our parents doing, the daily grind to make a living. They would then come home tired and miserable, to put food on the table.

So we’re told to do well in school, get post secondary education, this to get a better paying job, to earn a bigger salary.

Aptitude and higher education becomes beneficial, to find and establish a career that pays more.

Once we accomplish this, then the pressure is shifted to working as hard as we can.

We can then advance up the corporate ladder, to reach higher ranks within the company, which also increases in pay.

Then finally, we’re let off this “rat-race” treadmill, the handcuffs are taken off, allowing us to retire.

We then call it a productive career with great accomplishment. We drift off into the sunset, hoping our health is still with us.

In this artificial intelligence economy we now live in, technology is slowly choking us out. The concept of trading time for money our parents were slaves to, is no longer realistic.

Although the educational system is slowly evolving, they still prepare us to get a well paying job at the office tower downtown.

This in the hopes of lifetime employment with one organization our entire career. This concept is a dying breed.

The majority will now typically work for a number of companies during their working lives.

There are now massive layoffs, downsizing and outsourcing, that are all too well documented.

The once ironclad “loyalty” from the employer or the corporation, is now practically nonexistent.

As a result, workers are now getting their fingers caught in the spokes.

Many then experience financial hardship, because of this ever shifting unsettled dysfunctional workplace.

Trying To Get Ahead

So how does anyone get ahead then, in this volatile machine run economy that is replacing our jobs.

It’s becoming more difficult if not impossible, to gain any type of financial security let alone save for retirement.

This trade time for money concept has become broken, and there has to be a better way.

The math no longer works. There’s just isn’t enough hours in the work week, so it can become feasible in the long term.

Eventually, there’s a cap that’s placed on ones earning potential, this due to time limitations.

Then combine that with the constantly rising price of consumables, along with rising taxes, which takes a significant chunk of what’s earned.

What many then begin to realize, is that it’s a no-win situation for anyone who needs an income.

The Need For Passive Income

The key and the solution to this, is setting up streams of passive income. Passive income is defined as earning additional money, without the need of needing to directly work at it hands on.

Passive income, does not require you to continuously exchange your time to earn money. Just set it up once, and manage it.

The concept is, once you set up a passive stream of income, it will self generate money for you, while you’re doing something else.

The next step is to then set up additional streams of income, so if one stops, the others will still be earning.

There are a variety of proven methods you can set up, to earn this passive income.

The best ways include income that’s derived from a small, preferably home based business. Another example would be money earned from investments.

Small business income, is money that’s generated from for instance, an eCommerce website, which is set up once, and then it becomes hands free. It becomes self sufficient, or is operated by someone else.

For instance, an example of this are dividends realized from blue chip stocks, interest derived from compound savings, or appreciation from real estate investments.

The Benefits Of Passive Income

The biggest advantage of passive income, is it’s money that’s self generating, regardless of your effort. If you don’t bother putting any further time into it, this passive income should still generate money.

You should still be earning the same amount or more, while choosing to set up additional forms of passive income if you want to. Or you can just go to the beach and relax.

Once your money is efficiently and diligently earning you income, while you focus on something else, you’re in effect getting paid twice for your time.

You then realize, it’s possible to create additional wealth using this strategy, by setting up more autopilot streams of income.

It’s recommended, you focus your attention towards developing and activating these multiple streams of income. What doing so does, is it offers the key to your financial freedom.

What You Think About Of Money Becomes Your Reality