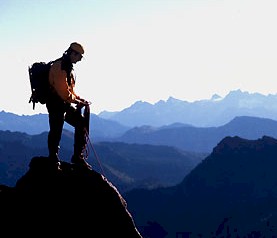 Life is just too hard and too risky in the eyes of many. then by contrast, others are such proponents of a virile existence, demanding greater courage and giving great pride, that they are ready to leave the coziness of their home to scale Mount Everest, and breast the elements for the sheer joy of conquering the summit. Whatever the perspective, the nature of things remains unchanged. There are rules, necessities and duties, and limits, possibilities and impossibilities.

Until our final doom, one can accept them and make the best of them, much to one’s pleasure and honor, or one can do the opposite and suffer the consequences. The choice between these two options is the very essence of freedom. Personally, we have no use for the second option: a self-inflicted misery that is without the slightest doubt a pitiable way of life.

The first option, on the other hand, is a pleasurable and honorable alternative that you can find compelling, though uphill. It is applicable to any situation encountered in the course of one’s living venture, provided one is not unfortunate to the point of being hopelessly unable to cope. The range of this applicability corresponds with the range of one’s adaptability. It is normally considerable, despite the tendency to cling to old gratifying habits even after they have become impracticable or unsuitable, owing to a change of situation.

Who Needs Change
One can be weaned from such habits onto new gratifying habits, in the same way as a baby can be weaned onto solids. The more the change is significant and one is reluctant to adapt to it, the more the weaning process is difficult and long in producing the desired effect. Again, the only option worthy of one’s attention consists in taking things as they come and making the most of them, for one’s sake and that of others. The reverse is foolish and harmful, a deplorable waste of humanity.

On the whole, the power to live in a well-adjusted and high-minded way and the freedom to choose this way in preference to the alternate, illegitimate, way are the foundations of the life one builds. The exercise of this power does not necessarily imply a principled resignation toward the status quo. One may be faced with a remediable evil that calls for a struggle to remedy it, effectively and rightly. In that case, living in a well-adjusted and high-minded way entails accepting the need for this struggle and the means of waging it, and sparing no effort to attain one’s end. Ills are a test of will, an opportunity to show dignity.

They are also an opportunity to probe and appraise one’s inner resources. Over the years, we have improved our situation and especially attitudes, whose negativity was the most unfavorable and improvable aspect of life. In so doing, you have discovered my true richness. Nature has endowed you with an adaptable capacity for happiness within the limits of my changeable reality. According to your observations, this capacity is not unusually great, compared with that of most people. You can even be tempted to think it is somewhat lagging behind.

During that time, the riddle of life had more or less baffled. Yet, laboriously, with the help of many books and much thought, you can manage by degrees to clear it up, enough to find a meaning to life. This riddle is comparable to a mire: The slower you go through it, the deeper you get into it. Perhaps thinkers are commonly untalented in the art of living and their saving grace is their dogged determination to redeem this lack of talent by dint of studying the human soul. Amusingly enough, these untalented individuals are often perceived as gifted, once they have seen the light and reflected it with the numerous mirrors of an elaborate analysis, after a tentative and protracted search in the dark.

Live Life Like You Want To
This sort of overcompensation is typical of people who experience difficulties in a certain area, but refuse to admit defeat. While some fare well in this area with a minimum of effort, they try hard to overcome these difficulties, with the result that they often fare better than the others. Their redeeming feature is their willpower in the face of their shortcoming, which they use as a reason to redouble their efforts, not as an excuse to throw in the towel. This is a recipe for a worthy success. They discipline and surpass themselves, and thus proudly turn things around.