Funny How You Know Whether Someone Really Likes You Or Not 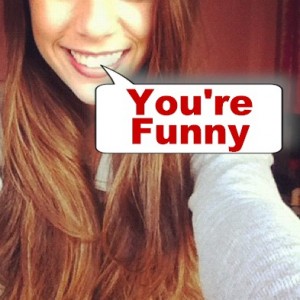 Liking, you liking someone and they genuinely liking you back is always an ideal situation. But being attracted to someone is never always mutual however since you may like them, but there may be no love coming back.

Have you ever wondered if someone that you’re somewhat attracted to likes you back or not, as it’s not always the case. So to know if someone is on your side, whether it be a coworker, a relative, someone you’ve just met, or an employee really likes you, there’s one simple way of finding out.

This secret, the emotional passage which has proven to be true more often than not, is as simple as if you could make them laugh. This laugh, however, needs to be genuine and spontaneous and not at you but with you.

If the laughter is completely natural and coming easy to them from within, then the indication is yes, that person likes you. On the other hand, if you do or say something that’s extremely funny, and the other person is obviously trying to suppress their laughter, then they most likely don’t really like you much.

Out On The Town
So when single and out on the town prowling about, playing the dating and mating game, learning and adjusting to its finicky nuances, whenever a member of the opposite sex which you’ve just met for the first time says, “Wow, you’re funny!” regardless of how lame your joke may of been, that’s a good sign that the person is attracted to you.

In contrast, if someone doesn’t laugh or gives you a blank stare even though your joke was industrial grade funny, then don’t be surprised to get the brush off and they suddenly having a busy schedule if you ask them out.

No, I Don’t Like You Much
In a corporate setting, say that you’re working on a huge work project with several of your coworkers, and you don’t really like the supervisor or the group leader that much, you simply just won’t instinctively warm up to them by smiling or laughing at them.

Although you don’t explicitly tell them so, you’ll nonetheless communicate your disdain towards them in a way that they’ll pick up on your vibe. The first clue being you won’t laugh at their jokes, meaning you think that they’re totally lame or even offensive.

However, your other coworkers are laughing out loud as if the supervisor was Steve Martin hilarious. The implications of your actions may eventually become clear to you once you receive your performance review at the end of the year, or are up for a raise.

Those coworkers who laughed at the jokes are smiling smugly at their glowing reviews. You on the other hand are wondering if your sub-par appraisal, or being passed for a promotion, would of improved if you only laughed at any of their jokes.

Is Humor The Key
Is humor the key ingredient which has evolved to the point of indicating your interest towards others, such as with a new or existing relationship.

So to find out if any of your new potential friends, romantic partners, coworkers, relatives, etc., really like you or not, just inject a bit of humor and then gauge their immediate response. If you yourself are interested in someone, you could monitor your own reaction by deciding if you find them funny.

Do The Funny Test
When you meet new people, it can take a while to know whether a relationship will work out. So injecting a bit of humor will immediately weed out the one’s which most likely won’t, so you could move on since you know which direction the relationship is most likely headed.

Similarly, for any current ongoing relationship, if you need to gauge where it stands, you could use the funny as a measuring stick to know whether they’re still satisfied with you and are on board.

For instance, if you begin to notice that your partner is no longer laughing at some of the subtle silly stupid little things that you do or say, and they once laughed at them, then maybe something’s becoming a bit unhinged.

They will insist that their lack of laughter has nothing to do with their dissatisfaction with you, but rather there’s other things on their mind, then don’t be surprised if the relationship eventually goes into decline or falls apart altogether.

You can pinpoint the “breakup” back to the exact time when they stopped laughing with you, as that’s when they most likely began finding others funny and started to confide in them.

All Purpose Humor
Humor, the genuine funny serves many functions, perhaps the most important being if someone likes you. It’s one of the strongest known human emotions which reveals if there’s any chance of a potential relationship.

This bond could be continuing a friendship, developing valuable allies, or getting along with family members. Any humorous exchange feels good since it indicates that you both have a mutual association with each other, which leads to mutual like.

Proven Ways To Pump Up Your Employees And Keep Them Motivated

The Latest Methods To Effectively Promote Your Mobile App