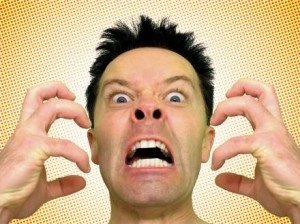 Anger and getting angry is all about losing one’s self control, and once we lose control, bad things can happen most of the time. If it’s family or friends, it can lead to fractured relationships, and if it’s a public confrontation with a complete stranger, it can lead to legal issues.

Getting Angry About What?
There was once a scene in a mall parking. It was between two middle aged women, and they were arguing over something as mundane as a parking spot. Both were standing side by side, purses in hand ready to strike, screaming and hissing at each other, waving their arms frantically in a threatening manner.

The argument became a name calling competition, trying to out-do the other. Punches from one party was even thrown. Nothing earth shattering, too tame to make the six o’clock news. The sad thing was, the basis of the confrontation from a ‘big pictue’ standpoint was ultimately pointless.

Everybody Hurts Sometimes
The fact is that everybody at one time or another gets angry. Whether it’s a family member, or a co-worker, or a stranger who took your parking spot, we all can get angry. The problem with anger is that there is only a small chance that it may solve the problem, but a greater chance that it’ll create new ones.

Anger is all about losing control, and when we lose control, the aftermath is that something bad usually happens. Someone once said, “Anger by itself does more damage than the condition that actually caused it.” or: Anger is only one letter away from danger!

So lets be honest, just like the two women scraping it out in the parking lot, we can act as well as look pretty darn foolish when we get mad. Usually doing or saying something that we’ll regret later. Getting angry is a lot like getting drunk. The person that’s drunk is the only one who doesn’t realize that he has a problem.

Keep Your Cool
What makes anger and getting mad so dangerous is that it occurs the very instant we lose control, which is a split-second before we realize it. The only obvious way to minimize the damage is to stop yourself and gain back the control.

Before we can diminish our anger, we have to understand the root on what causes anger. The main reason why we get angry at someone is because someone didn’t act the way we wanted or expected them to. Anger is not really an action, but more of a reaction on how we respond to someone else’s action or a lack of one. Getting angry is is all about allowing that person to control you.

Is there really any instances when something good has come out getting angry? Someone once said, “Whatever that has begun in anger, usually ends in shame.” So the next time that you find yourself getting angry, take a breath, hold yourself back and ask yourself these questions:

– Is me winning this argument really worth ruining this relationship or hurting someone close to me?
– How important will this issue be in a hour, a day, or a month from now, how about year from now?

The moment that you stop, step back and take back control, you will lose the anger. Don’t allow someone else to control how you feel.

No One Ever Is To Blame
So who really suffers when you get angry? Buddha once said, “Holding on to your anger is much like holding on to a hot piece of coal, you’re the only one who is going to get burned.”

Sorry Seems To Be The Hardest Word
Again, the best way to stop or end an argument is to just bite your tongue. That is not necessarily admitting fault, it’s controlling your anger and regretting something later. Drop the ego, drop the pride, it’s not about you.

9 Of The Most Common Lies Told By Women And Men