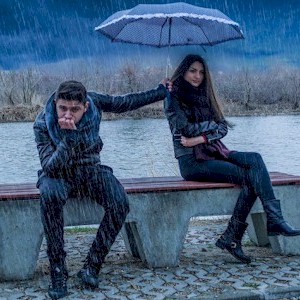 The same reaction occurs in the animal kingdom, specifically humans. Usually, those who are similar to each other, who have lots in common, will usually join forces and live an extremely happy existence.

What they have are the same basic values of belief, share and enjoy the same music, they enjoy doing similar and compatible activities on their Friday nights.

They share the same comfort zones and boundaries, temperament and attributes. They also enjoy the same type of company when it comes to their group of friends, such as attending the same church, etc.

Then There’s The Polar Opposites
There are times when two individuals, who are complete polar opposites of each other, are drawn together like magnets. The usual case being that one or the other, or both of them has something that the other has.

A person who may be generally pessimistic or extremely cynical, can be drawn towards someone who may have a sense of eternal optimism and joy. “You complete me…” so they say.

An individual who’s spent their entire life enclosed in a bubble, sheltered, forced to follow the strict rules which are dictated by their parents, religion, or society, for proper behavior, may be drawn towards the free spirit type.

They’re attracted to someone who’s used to living their life radically, a complete diametric of themselves. Someone who does whatever they please, the way that they see fit, this regardless of what they’re told. They become intrigued.

It Can Create A Danger Mine Field
Such polar matches at times can prove to be volatile, this usually resulting in explosions of disagreement, while creating the secondary damages which goes along with it.

Most often however, what they do is create a larger field of existence while they expand, balancing each other out, as in the same case when it comes to positively and negatively charged electrons. The particles will become neutralized once they’re combined and then stuck together.

These matches have also long puzzled the social experts along with others who look at relationships from a subjective viewpoint. What they wonder is how two people who have absolutely nothing in common with each other, are able to form a strong successful bond, an unbreakable relationship.

What they don’t realize or take into account is that it’s simply just another example of nature’s own designated selection process, principles, which are hard at work.

A Rocky Road Ahead
Attempting to form a mutual relationship with someone who’s your complete opposite, can prove to be hostile. The chances are good that it’s not going to be easy, this regardless of how well that you complement each other.

You’re constantly going to have different viewpoints on all of the major issues, important factors such as your contradictory lifestyles, which can begin to grind after a while.

The most important keys when it comes to these relationships are patience, maturity, adjustment, and understanding. Keep in mind that the mindsets are completely different, so you need to know all the curves and edges of emotions, this before entering into the relationship.

You can’t really expect them or yourself to change that much, you are who you are and likewise. Most will bend but won’t break.

Living With The Differences
Before you decide to commit to someone who’s the extreme opposite from you, there’s a few arguments that you both need to smooth out. Discuss the major differences, opinions, or beliefs in the macro things which matters the most, such as the type of home ownership, children, etc.

Can you both somehow adjust, find a middle ground and be happy with these differences? Can you iron them out and come to a compromise. If you think your differences are too far apart, then it’s advised you take a step back off the ledge, as it can become irreversible and volatile.

On the other hand, if you both feel that you can prepare to enjoy a lifetime of adjusting to these differences, realizing that things won’t always be smooth, it will at the very least never be boring.

Polar Attraction
To say that one is unique, we should all realize that differences are always going to be inevitable, so what needs to be determined is how different.

Backgrounds can differ in a variety of ways. We could grow up as next door neighbors, or in the same town, but have completely different types of affection, achievements, religion, ethnicity, friends, all different.

So learning to look at the middle ground, to be less selfish and needy, while being more humble and appreciative of how different people can be, helps in accepting the reality that opposites can attract, this without becoming distressed or angry.

We should always keep in mind that everyone is imperfect. That we all have our own flaws, that there’s always some kind of irritating, annoying, or unpleasant tendency that others have, that we need to learn to live and adjust to.

Knowing this, why then do we always expect perfection from ourselves and others. “You’re not paying attention to what I want!” Learning to somehow cope with our strengths and weaknesses helps in living in better harmony, which then brings a sense of dynamic balance that’s injected into the relationship.