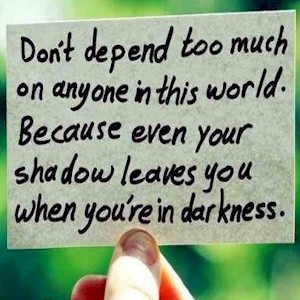 What’s laid out is a path, instructions to take which directs our life. It’s our choice since it’s our own submission. The life we live can also become challenging, our life can become a protest. We can live a lifetime of finding out what works, and what doesn’t.

At times, we get mislead, frustrated and led astray, confused where we’re going. We can attempt to follow our own wisdom, but we can easily get thrown off course. During these times, others who think they’re well intentioned, attempts to helps us do the right thing.

There are times when we trust others who appear to be in the know, more than we do, and then accept their opinion as views, as directives which are more valid than our own. We think that they know more or are better than us.

It’s usually the structure of the family and our schooling which sets this type of belief. Uncertainty about who we are or what’s best for us, conflicts with the boundaries with others who appears more important than our own lives.

Do What I Say
For some, it’s just easier to allow others to help them learn what they need to. For others, there are the expectations that everything will turn out their way, without needing to do anything.

This rather than learning or wanting to take any action on their own, this in order to make things happen. There may be an agreement to sacrifice their own authenticity in return for love or acceptance.

What this means is that if we don’t take responsibility of ourselves, then we’ll allow others to do so, to take that responsibility for us. By doing this, we’re giving them the permission to take control, to take charge of our lives.

Who’s In Control
Beyond this, there’s a price to pay when it comes to giving your life away. It’s not your life any longer, but someone’s ideal projection of what and how your life should be.

If this appears familiar to you, if you’re someone who’s just passively drifting through your life, hardly participating in what happens to you, then you should be considering certain options.

Take Ownership Of Yourself
Which is easy to say since it involves extricating yourself where you’ve been a passive participant. There’s also most likely protest from those who like things the way they are, and don’t want to change.

So you may be challenged for a while before learning to firmly stand your ground. But, before taking your life back, you’ll need to acknowledge the time that you’ve lost.

The only way to move forward is by realizing what has happened to you, how you got where you are, and what you need to do to change, which is different from what you’ve done so far.

Although you can mourn the past, that you should have taken more charge of your own destiny, it becomes important to acknowledge and accept that you’re responsible for the type of life that you find yourself in right now.

What you need to do is identify and then shift your attention towards your own needs and goals. What you want to do is prioritize what’s the most important to you, this regardless of what others think or feel about it.

Rule Your Own Life
You need to create space between you and your relationships. This may be difficult to do, this since who you are is usually tied and dependent on them.

It becomes difficult to attach yourself emotionally to someone while detaching yourself intellectually. But creating this space, what it allows is personal expression while minimizing the psychological entanglement.

The goal is gaining a healthy perspective of others, this without needing to create conflict within yourself or them.

Know Your Worth
We all have our specific skills, talents, and abilities, but we need validation which we don’t get from those who we want it from. When there’s someone who you count on, refuses to acknowledge your abilities, all it does is it just undermines your self-esteem and confidence.

Beyond being manipulative, this type of behavior is often designed to keep you dependent and needy. This is usually someone who doesn’t care that much about you.

Recognizing Those Who Has Their Own “Agenda”
Avoid those who insists you live in their shadow, this rather than living in your own light. This isn’t difficult to recognize since there’s nothing that’s subtle about them attempting to control your life for you, this around theirs.

Also don’t undertake anything personally or professionally which just serves the good of someone else, this especially whenever it’s at your own expense.

Know The Warning Signs
Look out for those who don’t have the inclination or the time to work on the relationship. Become wary of those who’ll make you feel inadequate, put you down, instead of placing the burden to improve themselves so that the relationship can stay afloat.

Identify a relationship that’s one-sided, limiting and undermining, where there’s no room or you have a say. Existing in this type of relationship with unhealthy undercurrents, fraught with jealousy, with one sided conditions, is hazardous to your well-being and health.

Never Attempt To Fix People
Although attempting to “fix” others appears admirable, it usually doesn’t work, this since from their perspective, there’s nothing wrong with them that needs to be fixed. They believe that everything is just fine.

If that’s the case, they’ll never accept the fact that you’ve changed, while attempting to convince you to return back to how things were. So don’t do it. If they continue down the same path, can’t accept that you’ve drifted apart, then let them go.

Stop And Surrender Have The Greatest Day Of Your Life Today