The Damage That Hidden Added Sugar Does To Your Health 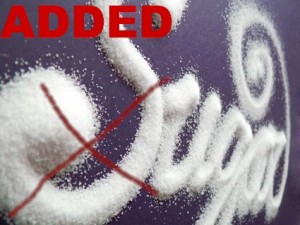 Poor memory, developing learning disorders and chronic overeating are just a few of the symptoms that’s linked to the consumption of too much sugar. Continuous studies reveal that these problems are just the beginning, as experts better understand the actual effects and damage that’s caused by Added Sugar. So what is the actual accumulated damage that absorption of too much sugar does to our brains.

One fact difficult to swallow is that North Americans consume on average, over 150 pounds of the various forms of sugar annually. That’s just under 8 – 20 pound bags, or 27 teaspoons daily of white sweetness.

That to some may be a little hard to believe, but that’s because sugar hides itself in all of the dark corners and crevices of our everyday diets. So as as a result, we don’t realize how much we actually consume.

The Hidden “Added” Sugar Trick
The key word to note is “added” sugar. A healthy diet will usually contain relative amounts of naturally occurring sugar, such as in certain grains and fruits.

The real problem however is that we’re constantly exposed to what’s referred to as added sugar, which comes in a variety of processed foods, and is also usually absorbed as a form of fructose.

But Our Brains Need Sugar
One clarification that needs to be made is that our brains actually needs sugar as an energy source for proper function. This is because our brain cells require twice the energy than any other cell in the body.

This equates to approximately 10% percent of our entire daily energy requirements. The energy to the brain is obtained by blood sugar (glucose), which at times is referred to as fuel for the brain. So sugar in moderate amounts isn’t that harmful for the brain, and is actually an essential.

The Harm That Is Added Sugar
There’s been studies which have been performed that indicates a diet which is high in added sugar actually reduces the production of a certain brain chemical, which is known as brain-derived neurotrophic factor or BDNF.

Once our brains become deficient of BDNF, it then stunts it’s processing power, making it difficult to learn, remember, or form new memories on both short and long term memory levels.

The actual levels of BDNF are found to be particularly low in individuals who may have pre-diabetes, diabetes, or impaired glucose metabolism. As the amounts of BDNF begins to decrease, the sugar metabolism worsens as well.

So what chronically consuming “added sugar” does is it reduces the BDNF levels. The result of these lower levels then begins to directly contribute towards insulin resistance, which will ultimately lead to Type 2 Diabetes, as well as metabolic syndrome.

The ultimate result of lower BDNF levels is that it will eventually lead towards a host of other unwanted health problems. Once this chain reaction begins, the brain as well as the body goes into a destructive cycle which may become difficult to reverse or stop.

There’s also the belief based on evidence which is accumulating that lower levels of BDNF may be the chief contributor to various states of dementia and depression. It’s also possible that lower levels may potentially be the cause of other diseases such as Alzheimer’s.

As there’s new research efforts being conducted on this condition, one thing that seems to be certain is that the reduced levels of BDNF isn’t obviously good, and the experts all agree it’s the over consumption of added sugar being the primary culprit.

We also know that overeating, as well as obesity, are also related to this since sugar contains pure calories. The link and actual reason between eating all those sugar laden caloric foods, and why we want to overeat hasn’t been fully known until recently.

Proof Sugar Dulls The Brain
There’s additional proof that the excessive consumption of added sugar will actually dull the brain’s mechanism. It does so by actually reducing the activity of the brain at the key areas which are responsible for the overeating and the consumption of yet more sugar.

When the oxytocin cells in the brain becomes blunt by consuming too much sugar, the built in “alert” signal intended to stop you from overeating actually fails to function properly, and as a result, you begin having seconds and thirds of that chocolate cake, while also raiding the fridge for snacks late at night.

So what all this suggests is that we’re just seriously harming ourselves with eating all those processed foods which are high in added sugar. The damage which begins and ends with our brains.

All of this chronic consumption of added sugar is proving as harmful as chronic drinking or addictive smoking. The hard truth may be that experts are just realizing the real effects of the damage that added sugar creates.

What Motivates Pro Athletes To Become Clutch When It Counts

The Mad Men Among Us The World According To Don Draper