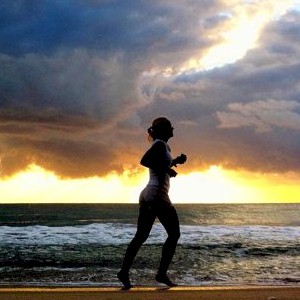 You see these joggers on the streets, in the parks, in the rain or the hot drenching sun. Joggers, those who run, why do they even bother.

The reason being that jogging is one of the most inexpensive while being the most beneficial of exercises for one’s cardio, and an excellent way to burn fat and maintain weight.

Jogging will make your lungs and heart stronger while giving you tone and definition in your muscles, while also clearing out the cobwebs in your brain.

You can grab your running shoes and go jogging almost anywhere, at almost any time that you want, making it an extremely convenient exercise to do.

These along with many other reasons is why running’s one of the most popular and biggest recreational activities and competitions in the world.

The biggest issue however is that the majority who initially start out have no idea on how to properly begin, and they’ll usually end up doing it wrong, get frustrated or get injured.

This then prompts the majority of weekend warriors to just give up on it before they can reap the benefits, as they won’t give themselves enough time to train for the basics.

The Process Of Basic Running
What the majority of new runners will initially do is take the concept of running for granted. Most think that just putting on their shorts and sneakers is all that’s required to begin running.

They quickly discover that there’s a longer process and may quit and get discouraged as a result, or because there’s just too much pain in their muscles and joints.

The initial and most common mistake is that most will start out too quick. They don’t properly pace themselves and will then begin huffing and puffing too much.

They’ll also most likely have the improper shoes which ill fit their body or foot style, and then experience pain or will soon sustain an ankle, knee, or hip injury. Then they decide that jogging isn’t for them.

There are others who may be more motivated and a bit more resilient as they’ll persist through the pain, believing that if they stick with it long enough, it should get easier.

But what usually happens is that it gets more difficult since even though they may be getting into better shape, they’ll continue to push harder making it appear that they’re making no progress, or they may get permanently injured.

Preparing Yourself For The Running Process
What you need to do is properly prepare yourself by planning out a jogging routine, which begins by using a heart rate monitor before you ever begin to jog.

When using these monitors, what you’re able to do is properly set up and monitor the proper pace which is the most comfortable for you, and then you can keep and monitor that level throughout your entire jog.

The most optimal jogging pace which is recommended is running anywhere between 50% and 70% percent of your maximal heart rate. This becomes easy to gauge when using a heart rate monitor since it allows you to monitor your heart rate as you run.

You can then pick up your pace if the heart rate drops a bit, or slow down once it gets a little too high. What’s also recommended for new joggers is to slow down to a walking pace once the rate does become too high, and then resume jogging once it drops below 50% percent.

How To Properly Monitor Your Heart Rate
The best method on how to monitor your proper and optimum heart rate is based on your weight, body style, and age, and then using the 50% to 70% percent rule, using the following formula:

Begin by subtracting your age from 220. This is what your maximum heart rate is. Then multiply this figure by 50% and 70% percent, which will give you your ideal target heart zone.

So if you’re 40 years old and of average height, weight, and health, you would need to keep your heart rate anywhere between 90 and 126 while jogging.

The Proper Heart Rate For Jogging
When you remain in this heart rate range, there’s no need to go any faster to get the benefits that jogging can provide. It’s all about the distance and how fast that you’re moving which needs to be taken into account.

For instance, you’ll benefit a lot more if you run a mile and do so in 12 minutes, rather than to run it faster such as in 9 minutes, and then become exhausted or sore.

What’s the most important is to remain within the limits of your projected heart rate capabilities. Over time, you will then begin adding more miles and posting better times as you jog.

This is when jogging will finally become something that you look forward to, this instead of something you’ll dread. In no time, you’ll be one of those joggers who will go running as often as you can, regardless of what the weather elements throw your way.

How To Become Wealthy By Starting A Savings Plan Today