Shopping For A Computer A Concise Glossary Of Computer Terms 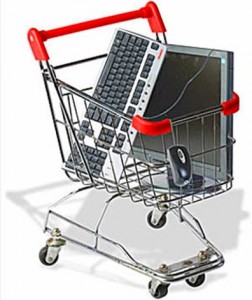 So you’re out there shopping for a desktop computer or a laptop and decide that it can become a bit intimidating, especially if you are not completely aware of the complex computer jargon and terminology. So explained are some of the most common computer ‘speak’ that you may come across.

Do You Want Bluetooth With That?
Bluetooth is a wireless short-range standard which will connect various devices such: laptops, netbooks, desktop computers, printers, digital cameras so they can used together wirelessly without having to be being physically connected with cord or cables.

Broadband Internet
A networked broadband Internet connection will transmit high-speed Internet access to your home or business. The broadband speed will vary depending on the service provider. Cable Internet companies will commonly offer speeds averaging around 8 up to 11Mbps, where phone companies who are offering DSL Internet service, will usually supports speeds anywhere from 3 to 5Mbps.

Cathode Ray Tube or CRT Monitors
Refers to the older analog based display technology which was commonly used for TVs, and then later those bulky computer monitors. CRT’s feature an electron gun which illuminates phosphor dots that will line up the insides of the glass tube. When the phosphors inside these tubes are lit, they will then display on-screen images. CRT’s as you know are now practically extinct. CRTs usually consume a lot of power, not the greatest for your eyes, and are bulky and heavy as well. Many CRT screens will support digital signals, though the image it will degrade significantly when it’s converted to analog.

Dual-core Processors
This is an integrated circuit which controls your computer. Dual core has two processors, with each having its own cache on a single chassis or die. When it’s in the dual-core processor configuration, the operating system will then have two processors to be able to handle instructions, which speeds up the speed of the computer as well as its ability to be able to multitask.

Ethernet Network
Ethernet is a widely used and the most common standard which is utilized in Local Area Network or LAN protocol, in which a network of computers and printers are physically linked together using cable, cords and wires.

Computer Firewall
A firewall is software or hardware that places limited access by an outside source or a network to your computer. Firewalls may also limit your home or business computer’s access to the network as well. These security measures by the firewall are put into place to protect your computer from malicious outside threats who may be attempting to exploit your computer in one way or another. Firewalls will also prevent any infected files which may be resident on a certain computer from accessing the entire network, as well as spreading the infection to other users.

Local Area Network or LAN
A LAN is a group of computers and/or printers that are physically connected to each other by cable or wires, so they will be able to communicate with each other as well as sharing information.

Liquid Crystal Display or LCD
LCD’s as a technical technology is it sandwiches liquid crystals between extremely thin sheets of glass. The crystals will twist as well as untwist to allow and then block light directly from a back-light, which is then able to form the images which you see. LCDs are lighter, thinner, and will consume less power than conventional CRT monitor screens.

LCD technology was initially used strictly for notebook or laptop PCs. But now, you will find LCD monitors used as TVs, and well as in cellphones, smartphones, tablet PCs, digital cameras, portable DVD players, as well as numerous other devices.

Productivity Software (Office Suite}
Productivity software bundles, such as Star Office, Microsoft Office or Open Office are entire suites of productivity software such as: A Word Processing program, presentation software, spreadsheet software, a database, as well as some financial tools and software solutions.These are all bundled together in one package and the prices are usually lower than buying them individually.

Operating System or OS
The Operating System is the software such as Windows 7 or Windows Vista, or Mac OS X for Apple computers. The OS controls as well as drives a computer along with it’s peripherals, serving as the main interface for the user.

CPU Processor
CPU or the Central Processing Unit, which is also known as the microprocessor, integrates the circuit controls of the computer or laptop. They come in various speeds, obviously the faster the better for multi-tasking or better gaming.

Random Access Memory or RAM
RAM is short term memory for your computer, it acts as a form of storing and recalling data. It can be read from as well as written to by the Central Processing Unit or CPU and hardware. As RAM is short term, it can also be volatile, the data which is stored in RAM will stay only as long as your computer is running. As soon as the computer is turned off, the stored data is gone. The more RAM the better.

[ad#co-1]
Upgrades or Upgrading
Upgrades refers to the ability for your desk computer or laptop to be able to add or replace computer hardware or software to boost it’s performance, increase the processing speed, or replace obsolete or defective components or devices. For example, you may add more RAM memory, or replace your old CRT monitor with a digital LCD widescreen monitor, or swap an old video card for a new one which features say an ATSC TV tuner, so you will be able to watch digital TV directly on your computer. So when purchasing a computer, make sure it has additional expansion slots for these upgrades.