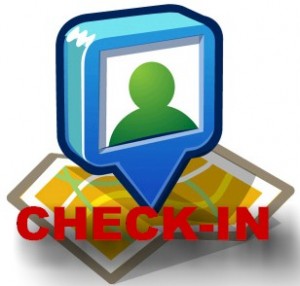 When Google recently made their announcement and intentions to further dominate the Web usage habits of Internet users, it created some serious ripples to most of the prominent and popular mobile and ‘Location Based Services‘ sites such as Yelp, Gowalla and Foursquare, forcing them to take notice. Other related socially driven site’s such as Groupon and Facebook may be directly affected as well.

So what did Google announce? As you know, they have been reinventing their entire Web presence to cater to and develop it’s various ‘peer to peer’ properties such as: location based searching, mobile as well as social marketing and more relevant search strategies. The method and the way that Google is attacking these areas are and should pose a threat to the other individual Web businesses out there which offer similar services. The latest of Google’s introduction has been the “Check-In” feature to Latitude, which is part of their location based Google Places sharing and social platform.

Check-In By Other Web Services
The “Check-in” feature has actually been extremely popular on a few of Google’s major location-based Web competitors, which allows for their users to be able to instantly “Share” their exact location with their friends while on their smartphone or tablet, provided they have the proper mobile app. They can immediately let their friends and associates know ASAP once they arrive at a specific local establishment, business or service.

Web entities who are already providing this type of service are: SCVNGR, Gowalla and Foursquare, who has all established their own unique “Check-in” type of service and audience based around giving out social rewards such as stamps or badges. What happens is that users will “check-in” into a site such as Shopkick, Loops or even Facebook Places, and instantly receive great deals from several participating local businesses. There are also “Check-ins” via apps from sites such as Yelp, who offers a mobile enabled platform for their users to be able to recommend, review as well as rate local businesses and restaurants.

Get All Of Google Under One Umbrella
So although Google may be late for the “Check-In” party, and yes, they may of “borrowed” similar templates and marketing platforms from these other websites, Google can and has the ability to significantly alter and then dominate the “Location Based Services” landscape in a virtual heartbeat, and these Web competitors know and realize that as well.

According to a recent study on these “Location Based Services” or LBS, they revealed that Google Places already was the most widely used and popular service of this type, ahead of Facebook Places and the like. This was also accomplished before the introduction of Google “Check-in.” There is also an additional feature to Google’s Check-In’s which makes this particular service unique, which is giving the users additional options such as being able to set notifications, as well as checking out from a location.

Along with Google being the Internets predominant as well as the most versatile search engine, along with the immense user base that follows it, they also have an advantage that the other Location Based Services do not, which is their own Android OS mobile platform which is expanding exponentially.

Google Places already has available apps for both the Android devices as well as for the iPhone iOS, that will completely integrate with their other “location” services such as Google Navigation and Google Maps. There is also Google’s relatively new HotPot, which is a localized recommendations and ratings engine, which is expected to go global soon.

Combining and using all of Google’s services, users will be now able to share their exact location in real time with their friends, rate as well as review local services, establishments or businesses, all using Google’s various services, across all the different mobile platforms. So the only component that’s missing is some type of ‘Local Deals” service like a Groupon right?

Google Going Into ‘Deals Of The Day’
Well no, almost immediately after Google was turned down on their buy out bid of Groupon for a reported $6 Billion, immediate word spread that Google was planning to launch their own Daily Deals platform, believed to be called Google Offers. They addressed these rumors by saying they were looking into the concept as well as developing other ways of connecting local businesses directly with mobile consumers.

Yet another service in the works by Google is Offer Ads, which is a mobile based initiative by Google in which advertisers will be able to directly send coupons to mobile users through either email or SMS, which should drive potential customers to local physical store or establishment locations.

So the entire combined effort of all of Google’s planned and available products and services can be downright intimidating to their competitors, especially if their business happens to rely on Android based mobile apps when attempting to provide similar competing services.

Can Other Location Based Services Stand The Heat
So assuming that companies such as Groupon or Facebook should be able to withstand this competition based on their sheer size, what about the other entities such as Gowalla, Yelp or Foursquare? There are also hundreds of other similar but less known LBS services which may meet the ultimate fate of Google’s muscle.

For businesses or services who are already using Google Places to build local awareness for their products, by they combining all of Google’s various services can create for the perfect storm for conventional search, local, mobile and social marketing.

When combining all their services such as: coupons, check-ins, ratings, rankings and reviews, local businesses will have absolutely everything that they need directly from Google’s homepage. With this type of firepower, it’s going to be extremely hard to beat.