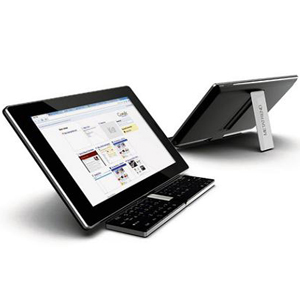 There is a fresh new smell of buzz created by the release of the Apple iPad portable tablet PC device. This has forced other major electronic manufacturers to join in the tablet market. Tablets are trendy cool to own, and are currently ‘red hot’ as a communication device. The biggest problem they are facing is the supply, because on the high demand issues. Apple on their initial release of the iPad, sold over 4.5 million tabs during their last fiscal quarter.

So not surprisingly, there are a number of companies worldwide that are releasing their version of the tablet throughout this year, and 2011.

The Newest And Brightest Tablet PCs Compared
Reviewed are a few of the capabilities of the newest and most promising tablets on the market, as well as some of the excellent features that are worth exploring.

The new tablets on the market illustrate the changes, as well as segmentation that naturally occurs as the various device makers will attempt to appeal to this new market. Changes such as the shape and size of the tablets are likely the most logical.

The iPad, for instance, presently requires two hands to operate, which can be too cumbersome if on the road. So smaller tablets which can be operated with with one hand are on the horizon. This will open up a new segment of buyers who are looking for something a little more lightweight and portable. Another important criteria that drives new designs and features for tablets is the audience it has to cater to.

Businesses will need more security, better integration with their in-house IT systems, and excellent productivity applications. Consumers looking at tablets will demand the devices to offer vivid video viewing, ability to handle games and music availability. Both tablet audiences will want to use their tablets for secure interpersonal communication using social networks, email and text messaging as well. There will also be a need to communicate and consolidate with the other devices out there, combined with other functions such as: GPS tracking and ebook ereader capabilities.

There are some obvious features that are missing from the current model of the iPad, features such as: no support for Adobe Flash, integrated front/rear cameras, external storage capabilities, and any type of SD-compatible media. Many of the other tablet manufacturers have however picked up of these shortcomings, as their new tablets deliver.

If you are looking for a tablet for your business, you’ll need to consider whether the device will integrate with your current security IT eco-system. Other considerations are: productivity applications, storage capabilities and multitasking capabilities. HP along with Blackberry, (Research In Motion RIM,) offers new Wi-Fi tablets which includes excellent features, ideal for businesses.

The HP Slate 500 Tablet
The HP Slate 500 Tablet’s main distinction is it uses the Windows 7 Professional OS. By contrast, most of the other media tablets currently available are using lighter Operating Systems such as the Android OS, which most smartphones use. So the HP Slate will support Windows-based applications, offer a familiar user interface, and have top notch security features, making it user and business friendly. Like their previous Windows slate devices, it also offers a digital pen, so you can manually write notes as well as emails by hand. Also included is the Windows 7 multi-touch display capabilities as well.

The HP Slate 500 is slightly smaller than the Apple iPad, as it has a 8.9-inch diagonal display and weighs a slight 1.5 pounds. It also features a built-in USB port, SD media slot, and a 64GB solid-state drive (SSD). There are also expansion options such as: the HP Slate Dock which can house additional ports, and an external Bluetooth keyboard/mouse.

The Blackberry Playbook comes with a 7-inch diagonal display and weighs less than a pound. This tablet includes a microUSB port, as well as the only device on the market that uses a 1GHz dual-core processor, which supports symmetric multiprocessing.

The BlackBerry PlayBook tablet offers features that are not available on the iPad.
Features such as:
– A front and rear camera for video conferencing and still images
– External display capabilities via a HDMI port, and
– The ability to display flash-based Web content

To address applications for the Blackbery tablet, RIM has released a software development kit (SDK), allowing developers to create applications optimized for the PlayBook. There will also be a BlackBerry App storefront for the tablet, to make it easier to find and download new and exciting apps.

There are several new tablets which are based on Google’s popular opensource
Android OS that’s currently available, and there are a handful more in the pipeline for 2011. One of the biggest advantages of these Android-based tablets is the market for Android apps. The Android app store from the smartphones is now slowly being taken over by the Android tablet market, as is the iPad apps. taking over iPhone apps. The Android based tablets can also be integrated with the variety of other Google-based services such as: Gmail and Google Maps.

The current Android tablets run the same version of the Android OS that’s designed for and used by the Android smartphones, and as a result, some of the tablets are more smartphone like than the Apple iPad.

The Android Dell Streak
The Android Dell Streak comes with a 5-inch diagonal screen, and claims it’s a tablet, but is more similar to a gigantic smartphone. It features: Bluetooth capabilities, Wi-Fi, as well as 3G where available. It also works with Google Maps, and is integrated with social media Android apps: Twitter, Facebook, and YouTube.

Samsung Galaxy Tab
The Android based Samsung Galaxy Tab offers room for extra storage with a microSD slot, and also includes a front and rear camera. This tablet features a 7-inch diagonal screen, which is larger than the Dell Streak, but smaller than the iPad. It’s not really a smartphone, as it offers support for an ereader, and room for an external keyboard.

So Which Tablet PC To Get?
Deciding on which tablet to purchase depends on your usage. Will it be strictly for home, or for the road, or in the office. Will you use it for business or pleasure? Other considerations include the features and the functions that the device will offer.

If you cannot decide which tablet is right for you, the best may be to just wait a while. Keep in mind that these are “first generation” products from established manufacturers and brands. Over time, there will be better choices, lower pricing, and yet more entities from prominent manufactures such as: Sony, Acer, Asus etc., and features to support the tablet after purchase.