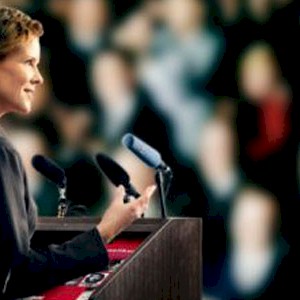 How we say the words we do is just as important as the words themselves. Our voice is our most powerful instrument which can motivate the troops, move mountains, or lull them to sleep. There’s a huge difference between presenting words and persuading.

You can say the same thing while meaning several different things, this depending on the tone of voice. You can say a simple “Thank you,” which is laden with sarcasm, surprise, or humor, this by just changing, projecting, the tone and the inflection of your voice.

In court, it’s known that judges will conduct their bias and attitudes based on the tone of voice. The judge’s can’t share private information with the jurors, but they can be influenced by the tone when giving instructions. If the voice lacks patience, carries annoyance, or has warmth and tolerance.

Adjusting Your Voice
You can change your rate of speech, the pitch, volume, inflection, pauses, use vocal fillers such as um, uh, ah. You can command an audience to listen with full energy, captivating them spellbound based on the power of your voice.

Your voice is your signature. It’s your trademark and your calling card. So your voice needs to exude confidence, energy, and conviction. We tend to interpret others based on the command of their voice.

Is it confident, relaxed, nervous, energized, weak, or strong. If your voice sounds unsure and timid, then your ability to persuade fails. Persuasive voices have extended volume, good articulation, varied emphases, and a pleasing pitch. Master speakers will use vocal variety while often varying the pace.

Improving Your Voice
You can change most characteristics of your voice. Begin by recording it. How does it project? Your voice needs to be interesting and easy to listen to for you to persuade. Is your voice working for or against you?

The pace you speak. It’s found that those who speak louder, faster, more fluently, along with varying their vocal intensity and frequency, were perceived to be more persuasive.

Speeches delivered faster are more credible than slow or moderate ones, this because quicker talkers appear more knowledgeable and competent. When the rate is quick, the listener isn’t able to mentally engage in arguing back.

The Faster You Talk
Faster is important to keep and capture attention. This because we think up to three times faster than we can speak or listen. We can also have conversations while thinking of something else.

Whenever we talk faster, we can keep their attention longer. There’s less time for their mind to wander. Most speakers will average around 120 to 180 words per minute, but there’s no ideal set speed.

Some public speakers are at 110 words per minute while others such as politicians are as high as 180 words per minute. Persuasive speakers know how to speak fast enough to energize, excite, and lift the mood of their audience. They will also slow down their speech to create anticipation.

Using Word Fillers
Unneeded fillers can ruin your presentation, damage your credibility, while annoying your audience. Most think they don’t have an issue with this, but they’re wrong.

So record yourself and talk. You’d be amazed how much you fill in the empty spaces during a speech. Common vocal fillers include, uh, er, um, etc. Some have an idiosyncratic way of filling in the silence which makes others uncomfortable.

Some will repeat the first few words of a sentence until their brain engages, deciding what they’re going to say next. Others will constantly say, “Okay” at the end of every sentence for confirmation.

Know Your Pitch
Pitch are the highs and lows of your voice, low usually being better. Deeper voices reflect authority and strength. A deeper voice is also generally, stereotypically, considered more believable, sincere, and trustworthy. Some speakers will drink hot tea before they speak, which is thought to create a lower sounding voice.

You can keep their attention, keep them alert based on your pitch, by raising or lowering your voice. The reason being the varying pitches prevent you from going monotone, and the varying inflections helps emphasize a particular word.

Applying Articulation
Make sure you clearly articulate every word, sentence, or phrase. When your speech is clear and coherent, it conveys competence. When your articulation becomes sloppy, it suggests laziness or poor education.

Consider how professionals such as doctors, lawyers, politicians, will articulate. Good articulation conveys experience, credibility, and your message is communicated precisely and easier to understand.

The Use Of Pauses
Well timed pauses will emphasize attention on a particular part of the presentation, giving your audience time to tune into and then process your message. It also helps you gain, retain, your confidence if you become rattled.

It’s a common mistake to not pause long enough, so make sure that it has full effect. Once doing so, your audience anticipates and listens closer on what you’re about to say next.

They anticipate something important especially when combined with the proper pitch. When you’re about to pause, your pitch should rise, which builds expectancy for the next words. Inflecting your pitch down defeats the purpose, providing resolution instead of suspense.

To Speak Better
Know how you’re filling in the pauses of your presentation. Be aware of using vocal fillers. Make a voice recording of yourself and then judge yourself on your pitch, pace, volume, inflection, pauses, and articulation.

Make sure that you analyze your call to action, use persuasive presentation techniques, and always include silence to the most important key moments.