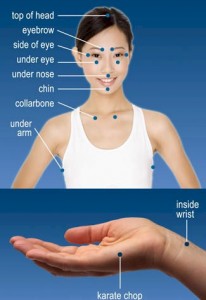 Why is it such a darn struggle just having to be in a positive state of mind all the time. Making sure that you have a good attitude, see the bright side of life, be in a good mood. Life is hard enough as it is. But screw that, at times it becomes apparent that you really have to express yourself, tell everyone what you really think.

You know, emotions will build up over time. Rather, energy builds up over time. The pressure on your temple begins to build, you can really start to feel it now. At first, it may be hardly noticeable, then slowly, like water dripping on your forehead, the pressure builds. The pressure starts to grow, the energy gets tight like a clenched fist, and finally you’re getting mad.

It builds to the point where this energy needs to be released, or else it will start to physically hurt. It will eventually begin to knock the mind, as well as body off balance. This is when most people will blow their top, and get upset, begin shouting or in some cases, beat the crap out of someone.

Clear That Energy Blockage
The reason why this builds up is because of a blockage in the energy flow. The stress causes the normal and natural energy flow to slow down, begin to back up and then creates this pressure scenario. Much like when the plumbing overflows in your house. When you begin to take out these blockages, the intended energy then begins to rush through and finally, relief. That’s when most will say, “Oh that’s better, – I feel fine now!”

What is EFT Or Emotional Freedom Technique?

EFT is a proven technique which involves the stimulation of a variety of acupuncture points within the body, while you are simultaneously connecting to and thinking about an issue or emotion that you want resolved or eliminated, for example whining. Other issues that can be resolved using EFT can be: health, weight issues or external issues such as making more money.

It Begins With An Understating Of Acupuncture
Acupuncture, originating in China, has been practiced for thousands of years as a method to overcome psychological, physical and emotional problems or issues.

The Underlying Idea Of Using Acupuncture Is
1) The human body has a number of natural meridian lines within the body
2) Along these meridian lines, there is energy that flows within them, which is known as ‘Chi’ (pronounced chee)
3) The ends, the beginnings and all the parts between each of the meridian lines (known as acupuncture points) are close to the surface of the body, so they can be affected by physical touch and manipulation
4) If a person has a particular issue, an acupuncturist will know exactly which meridian lines have a blockage, that are relevant to that issue. The acupuncturist will know the exact points that are appropriate to use for that resolution
5) The use of acupuncture needles, which are extremely thin and hollow, are inserted in the appropriate acupuncture points to allow the flow of energy through the particular meridian line
6) With the blockage in the flow of Chi resolved, this should improve or eliminate the issue

Acupressure or EFT is the same manipulation of the acupuncture points throughout the body, but instead of using needles, the thumbs and fingers are used instead, known as Emotional Freedom Techniques. Other forms of acupressure massage that you may have experienced or heard of before are known as: shiatsu or reflexology.

With EFT, a series of light tapping with the fingers and thumbs, at the same acupuncture pressure points are used. The tapping can be done by yourself, thus resolving your own (whining or making more money) issue. A practitioner can also do the tapping for you.

The person is asked to repeat a statement or sentence which describes the particular issue, the idea is that it allows the person to stay connected to the issue in question by repeating the problem. At the conclusion of a round of tapping on these acupuncture points, the strength of the issue is then checked with the person. If the issue is still strongly present, then more rounds of EFT tapping is used.

One round of EFT takes approximately 60-90 seconds to complete, and the majority of those who have experienced tapping using EFT report a decrease in the strength of that issue.

Because EFT is performed using the fingers and thumbs, anyone can learn and do this themselves. It is a useful tool to help anyone deal with any issues, whether they may be physical, emotional or even psychological.

What’s great about EFT is you don’t have to believe in it. You don’t have to believe that EFT works. You can think it is a bunch of bull, with no effect. All you do need is a sense of curiosity and some willingness to try it. The rewards will be high, you eliminating that unwanted issue. There are thousands upon thousands of people that have become regular EFT users, and there are a lot of EFT practitioners worldwide that can help you immediately.

Stop The Damn Annoying Whining
This is what happens when you or someone you know… whines.

Whining is an expression of backed up ’emotions’, similar to panic attacks or temper tantrums, or wanting to beat up your brother etc. Whining and complaining is just at a slightly lower scale. These are energy blockages, but not at the “life or death” category, but rather it’s more like a nagging pain or a thorn in your foot.

Nonetheless, the pressure starts to build up, that’s when we start to whine and complain – about our spouses, about bad drivers, our kids, our lack of finances, the lousy weather, anything that will make you feel better, allowing you to release the pressure for a while.

We unfortunately are eventually forced to act out this emotion somehow. That at times can result in damaging ways. We eventually begin to act out the ‘whining’ frustration by ways such as: overeating or addiction, compulsive behavior, compulsive exercising, compulsive working or cleaning, or the worst, substance abuse. All these actions provide and produce a state of mind shift and makes us move somewhere else for a while, where that pressure is relieved.

So whining should be dealt with on a regular basis in a healthier manner, as a physical and mental health measure.

Tapping Your Head Using EFT
We can also use EFT to actually target and then unblock that energy flow which *causes* the whining. It not only only drains the metaphorical and energetic fluid out of the system, but actually heals what caused it in the first place. So that whining will be less, and less, and eventually you will be able to display that “good attitude” of fortitude, courage and strength for real.

The EFT Protocol
1. When you feel the time is right, sit down and think of the EFT protocol
2. Think about something that annoys you or want to fix in your life
Note:
This is not about major past life issues such as: trauma or abuse in this case. But rather something you could really whine or complain about. So pick a topic, take a deep breath and then apply.
Example.
“Ok, my husband really is starting to get on my nerves. He’s always wanting to watch what he wants on TV, without asking me. He will then sit on the remote so I am screwed and that pisses me off…”
3. As you begin to complain and whine, you then begin to tap. You may tap randomly or even intuitively, all during your whining. When you get to the Karate Chop point, start again at the top of the eyebrow

You will notice that the tapping will tend to get faster as you get into the midst of the whine. That’s a natural response!
4. Continue tapping until you:
a) run out of things to complain about;
b) feel better;
c) start laughing at yourself;
d) have forgotten what you were tapping about

Complaining is a natural human response that needs an energy release. Whining actually in itself is healthy and can prevent harsher actions such as: road rage, throwing a flower vase against a wall, panic attacks, and psychosomatic illness.

When the whining is used with the release and the un-blocking effects of Emotional Freedom Techniques or (EFT), your mind, body and health is then served in a more profound way.
Get Brad Yates – Money Beyond Belief HERE!