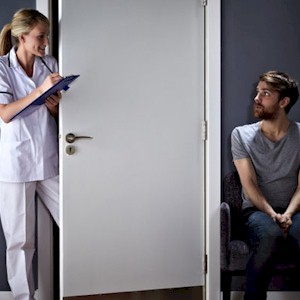 Realize saying something like, “I’m tough and not scared of anything,” or “I didn’t really want that job anyways,” most likely means that you’re not that mentally strong. That the odds are good you’re hiding some type of deficiency, and acting tougher than you are.

While acting tough, being a poser, might meet your needs in the short-term, such as you puffing out your chest by sucking in your breath. What this does is artificially boosts up your vacant ego. People might temporarily back off, but it’s not a very good long-term strategy.

What’s known instead is that those who act tough, may eventually suffer serious consequences. This particularly for those men who thinks they’re macho, who’ll visit doctors less for instance, thinking that they’re fine, and nothing’s ever wrong with them.

No Not That Tough
They’re just less forthcoming when it comes to their health and medical symptoms, this especially if the reveal is to a male physician.

What’s ironic is that they’ll choose a male doctor, this because they believe they’re more competent. Most likely, they’re just too insecure to reveal their privates to a female doctor.

What some suspect is that delaying medical appointments, or masking, minimizing, or ignoring health symptoms, may be one of the reasons why men on average, will live five years less than women will. So it’s not fate, gender, or occupation, but ego.

What’s apparent however, is that it’s not just men who has this need to feel that they’re tough and crusty on the exterior. There are also plenty of women who does this as well. So know if you’re just a sheep in wolves clothing, acting tougher than you really are.

You Mask Your Insecurities
The signs of acting tough as nails does is involves developing a persona which says, “I’m always the best.” But what’s hiding behind that tough facade, resides low self-esteem and self-doubt.

Instead of wasting all this energy, this by attempting to cover up a boatload of weaknesses, what those who are mentally strong will do, is invest their time into improving themselves.

What they’ll acknowledge are their shortcomings, and will then dutifully work on them, always striving to become better.

There’s No Such Thing As Failure
Realize that saying, “Failure isn’t an option,” won’t do is prevent you from failing. What it might do instead is force you to procrastinate, while preventing you from trying.

Those who pretend to be tough, are often more interested in showing off the skills that they have, this rather than learning new ones.

What mentally strong people will always do is view failure as a stepping stone, another notch towards their success. That what they’ll do is trust their ability to rebound after their setbacks, as they’re always prepared to learn and improve from their mistakes.

Worthiness Dependent On How They’re Viewed
Those who come across as acting tough are always concerned about their appearance, how they’re viewed, while always making sure that it’s fortified with aggressiveness.

This is what their self-worth is dependent on, as they’ll react strictly on what the opinions of others is at all times.

Those who are mentally strong lives in their own cocoon, as they don’t care what others think, and aren’t worried or need to prove anything to anyone other than themselves.

They’re also not afraid to ask for help, be vulnerable, as all they’re fueled by is the motivation to become better, to grow stronger.

The Suppression Of Emotions
Most often, the only emotion that these wanna be tough people displays and feels the most comfortable expressing, is anger. What they’re good at is hiding their fear, sadness, or excitement from others, this as often as possible.

What mentally strong people aren’t afraid to admit is that they’re scared or unsure, while not being shy when it comes to shedding a tear every once in a while.

Rather than ignoring their emotions, they monitor them. What they’re acutely aware of is how their feelings can influence their thoughts and behavior.

The Denial Of Pain
Those macho men and women who are intent on acting tough, will pride themselves on tolerating plenty of pain.

Whether treating their bodies like a machine, or refusing to acknowledge an injury or health issue. They view their willingness to swallow the pain as a badge of honor.

What those who are mentally tough won’t do is tolerate pain, this just to impress others. What they’ll do instead is isolate the pain, while attempting to turn the suffering into an opportunity to become stronger.

Thinking Everything’s Possible
It’s admirable to have a healthy self-confidence, where acting tough involves grandiose proclamations such as, “Nothing’s going to stop me!”

Those who thinks they’re tough will often overestimate their abilities, while underestimating the work and sweat equity that’s needed to reach their goals.

Mentally strong people are well armored for change and challenges. They’ll acknowledge all of the potential obstacles which stands in their way, while recognizing how much work they need to invest.

Attempting To Control Others
The insecurity which leaks out of those who acts tough, thinks that they need to control others. They’re wanting to be perceived as being “in charge,” while micromanaging everyone, this by making unreasonable selfish demands.

Mentally strong people are just interested in controlling themselves rather than those around them. They regulate their thoughts, manage their emotions, while behaving productively, this despite whatever circumstances that they find themselves in.

Building Mental Strength
What most are guilty of is putting up a fake front, this to make themselves look tougher when in times of doubt. The key becomes to build mental strength, where what you feel inside, matches how you act on the outside.

Everything That You Need To Know About Low Carbohydrate Diets