Learning To Walk And Then Run The Hard Way 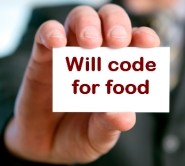 Am I so different than anyone else that I tend to learn almost everything the hard way. At one time, I became systematically sick every winter for years before I learned how to take better nutrients and at the very least wear a hat and warm socks when it was cold outside. I used to always cram for exams much too often before finally realizing that studying in advance builds for better memory retention.

I didn’t learn the true benefits of living a healthier, more active lifestyle and eating better food in moderation until I got tired of constantly and chronically getting sleepy and listless while nursing a bloated stomach right after I ate dinner.

I didn’t realize until recently that eating those unhealthy foods and consuming sugar laden drinks when and wherever I wanted to was bad, until the girth in my waistline began to balloon and popped the buttons off my jeans. Is it just me or do I really learn things slow and the hard way.

This character flaw unfortunately didn’t disappear once I decided to move towards eating a little less and finding more reasonable ways to live. Nope, not me. I’ve somehow decided that being a lot more active by moving around more and then eating less was better for me.

I read somewhere that you’re supposed to start off slow and easy and then give your body plenty of time for it to recover. Yes, I know, it’s also important to take days off for resting and recuperating as well. That may be fine for others who are attempting to become active, but wasn’t for me.

Also, you always hear people saying that if you suddenly reduce calorie intake too fast, that your body will actually think that you’re starving yourself to death, so as a result it will hold on to the body fat.

And yes, I heard yet other people say that food is fuel for the body and to be somewhat of an athlete, you will need to balance your diet to match your effort. OK, sure, might be good for everyone else, but hey, that’s not for me.

I eventually figured out that running was good, and then running more was even better. If cutting down a bit on my actual food intake was good, then cutting down more had to be much more better, right? Well, this thinking wasn’t going anywhere.

The precise design and mechanism of the human body which is a fantastic machine allows us to completely abuse our physiology for a while, but will then instantly begin to recover itself, recuperate and then function normally again.

If you decide to run too far or eat too little, you can lose a lot of weight quickly and think that you’re getting into better shape. This is not always the case, again, learned this the hard way.

I once tried it, but around three weeks into this new routine I began to feel a bit of pain and almost every joint in my body ached, while everything that was around me started to look like a cheeseburger. The stapler which was on my desk started looking like a hot dog. My computer monitor began to look like a microwave oven. I was getting hungry, tired and my body hurt.

Year after year, mostly through trial and error, you’re finally able to accumulate enough experience to finally realize that living a healthier life and leading an active lifestyle is important. And you can also assume that most do learn the hard way.

Every time that I embark on a new project, whether it’s training to run better or quicker or further, or commit to physically exerting myself by working out everyday, I still somehow keep on making the same mistakes. I still attack the project at full throttle, afterburners activated.

I’m confessing this because I know most of you have the same bad habit. It’s obvious that the adult onset athletes, not that I’m an athlete by any means, are most guilty and susceptible to being fueled by ego and not by common sense.

So if you happen to be in the middle of your summer training regimen, be careful. If you’re just started to jog or entering your first marathon, be careful as well. Be as patient as possible, be gentle with yourself. Be as nice to yourself as possible.

The lessons are still be to learned. You can learn through the advice, experience and expertise of others. Or, you can learn the hard way. The hell with everyone else because you know better than them right? You’re better educated, you’re more computer savvy, you’re just plain smarter than anyone else you know, isn’t that right? Well, if that’s what you think, then you must be right!

How Buying Online Is Overtaking "Brick And Mortar" Shopping

How Businesses And Marketers Can Use Twitter To Increase Revenue