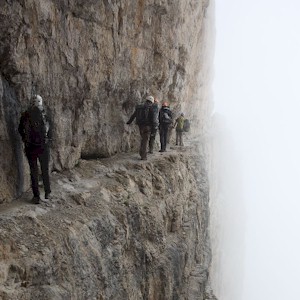 You may think that all those men and women who appear courageous, appear brave such as those in law enforcement or fight fires, have no fear. This is misunderstood as these “hero’s” are scared and afraid just like anyone else. It comes down to how they manage it.

What’s found is that it’s actually they facing that fear is what gives them the courage, not the lack thereof. What they do is channel their fears differently. There’s also accusations that those who appear to show no fear whatsoever, are either sociopaths or crazy.

What being fearless comes down to is knowing how to manipulate and leverage that fear. There are techniques on how fear can be channeled, this to the point where overcoming it becomes second nature.

They Regard Fear
Fearless people are aware and will admit they’re not scared to be afraid. They’re the first to acknowledge so, as they realize being frightened is hardwired into the human nervous system, and thus impossible to ignore.

What’s understood is that what fear does is warns and protects us from harm and danger, and not to scare us. So fear to them isn’t the enemy, but more a friendly warning signal which guides them through dangerous situations while ensuring goal achievement.

The Mechanics Of Fear
Those who are fearless understand the inner workings of it. They recognize that fear is just an emotion that’s a combination of physical and mental components colliding.

They understand the roots of fear goes far beyond becoming worried or feeling dread. That their thoughts can accelerate their fears, this by making them worse than they are. They realize that their actions determines the degree that fear has on their lives.

The Core Of Fear
Once fear arrives, those who appear fearless don’t allow it to linger. They want to find out what’s causing it. They search for “why” instead of “what” they’re afraid of, and have isolated it to a few reasons.

• They’ve had some previous experience which scared them in the past, as fear is a conditioned response. If they’ve been in a car accident driving in the snow, then there’s a fear of driving in bad weather
• They’re biologically conditioned to be scared of something. There are a number of genetically predisposed things to be afraid of, such as snakes for some
• There’s worry about the future, as fear will emerge once one anticipates their predicament or actions could potentially have seriously harmful consequences in their life, such as their health, freedom, relationships, or self-esteem

The Will To Overcome Fear
There’s no better way to extinguish fear than having confidence. The more confident that one is, overrules the ability to overcome whatever fear that haunts them, while feeling more secure about it.

Building up this confidence involves acquiring knowledge, refining a skill, and then gaining experience. What knowing all the facts does is lessens the intensity and surprises of fear, by making things more predictable.

What refining a skill, whether it be interviewing for a job or public speaking, needs is repetition, as the fear is then shifted from potentially failing to actively coping.

Once generating experience, whether it’s direct or vicarious, the less of a challenge the fear becomes.

Over Prepare But Don’t Overreact
Those who are fearless rarely spend their time fretting about worst case scenarios, but would rather just prepare themselves for it.

They have a plan along with a follow up strategy to make sure. They over prepare by having a backup plan to the original plan, and do so without overreacting or ruminating.

Then there are those who wouldn’t dare approach it this way, because they’re afraid they might experience some type of pending disaster, or will become cursed.

What a small majority will do is prepare for potential disaster ahead of time, such as having an emergency kit in case of an earthquake, as the odds of they surviving would increase.

The majority of the population won’t take any action, refuse to put forth the effort to prepare for such events. For those who don’t, they live their lives in fear while they watch the Weather channel, and are in the path of a major hurricane.

They Always Take Action
This despite the fear that they feel, they do it anyways. They realize what determines the outcome of their life depends on the actions they take or don’t take.

Once fear interferes, their actions are motivated by this fear. Whatever it is that scares them, they find a way to face them head on, and forge through them despite the risk.

Instead of not taking action because of fear or being paralyzed by it, what they do instead is strategize then develop a plan. They plan by knowing when to push forward or when to pull back. They know which risks are worth taking and the ones to avoid.

They’ll Ask For Help When Needed
Despite fear having incredible evolutionary value, there’s a feeling of the unknown which creates discomfort, and it’s not a pleasant condition to be in.

The ravages of feeling fear is an inherently unpleasant experience which can cause emotional distress, physical discomfort, and mental turmoil.

When fear is allowed to linger and isn’t dealt with properly, it can turn into a pathological condition. What’s known is that 20% percent of all adults suffer from these anxiety disorders at any given time.

There are over 100 known phobias of the human condition, the majority of the disorders are characterized by the persistent fear of objects or situations.

What fearless people know is when to get help, this once the worry becomes excessive. Once the anxiety builds up and begins to interfere with their lives, they then seek help.

Improve Your Communication By Precisely Expressing Yourself