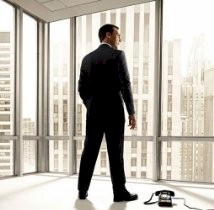 The entire advertising industry is built on a house of cards. It’s only commodity is the selling of a creative idea written on a piece of paper. A glamorous empty fraud. So it’s no surprise that Don Draper successfully thrives in it.

So has Don officially become Roger Sterling? No, not because he’s decided to marry his younger secretary, but for absolutely deluding himself into believing that he marrying his lovely secretary will make himself love himself more. Yet, while the real only person he really, really truly loves is now lost, in Faye.

So he, impulsively and at the spur of the moment, gave Meagan Anna’s ring. That was no small favor. Don has been floundering and lost all season, and has latched onto this new marriage like it was a life preserver. But it’s doubtful Meagan can keep him afloat. He coming to terms with who he really is, and what he has become, is the only thing that may truly save him.

The final episode, as surreal as it was, was also a parallel to “The Beautiful Girls”, Episode 9, where the beautiful girls had to deal with their immature, sad men and the results of the aftermath. Meagan now has her dream white knight, but she is half his age, and no more than just a pretty distraction. Peggy has fulfilled her dream job, and may have just saved the work that she loves more than anything else in her life, but it to be swept under the rug. Joan finally has her dream family, although she’s deceiving herself and everyone else about her child’s true paternity. Betty thinks she has her dream marriage, but her new husband is already tiring of her. No, there are really no happy endings for the beautiful girls, so long as these mad men are dragging them down.

And what about the mad men! Don being in love is far worse than the Don Draper hitting rock bottom. He was at least able to see pretty much clearly when he hit the worst of his downward spiral. But he has intentionally decided to stick his head in the sand, and chose to ignore all the warning signs that knocked him down and out in the first place.

The only ones to emerge on top? Pete Campbell and Ken Cosgrove. Pete, for ending his annoying tenure of being a scheming weasel, and successfully evolving himself into a man worthy of respect, loyalty and praise. Ken Cosgrove, for standing up for himself and achieving his dream without sacrificing his family values. Remember his line regarding… his real life being more important than his work. Don’s only been able to survive when he blurs the two.

The most heartbreaking line of the final episode? Glen saying to Betty… “Just because you are sad, doesn’t mean that everyone else has to be.” So true. Betty is angry, painfully depressed as well as repressed.

Don has decided to re-create yet another new fantasy life, complete with the engagement ring from the man named Dick. He initially gave the ring to Anna, who he had a quasi-infatuation relationship with. Now he starts the cycle over again with another woman, who doesn’t know his true identity.

Faye is someone who has his number. She is the only one who upfront knows who he was, and she didn’t even flinch. Instead, she advised him on how he can get control of his life… so what does Don do. He decides to dump her and starts a new fake one. Fabulous Don. Meagan being better with his kids than their own mother is, may have been the trigger.

Betty at the end, may realized that she and Don were really more alike than she wanted to believe, and she is having regrets. In spite of his previous deception, he excited her, he was dashing and dangerous, and she is one who likes the dark side of things.

It will be interesting to see where Mathew Weiner decides to proceed with Season 5. One thing for certain is it’s doubtful that Meagan is “happily-ever-after” with Dick/Don.