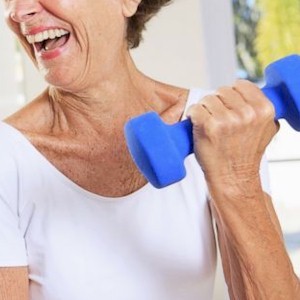 Resistance or strength training is particularly important, this for healthy aging. Doing so counteracts muscle loss related to growing older, since weight-bearing exercises are the most effective remedy against osteoporosis, this when bone mass loss becomes common.

What happens is the existing bone mass is absorbed by the body as there’s new bone that’s created to replace it. When it comes to osteoporosis, the formation of new bone fails to keep up with the rate of the bone absorption, which leads to thinner, weaker, more fragile bones.

What strength training does is it stimulates the bone building cells, which helps build new bone quicker. Also, when building more muscle, what you do is increase the tension on your bones, keeping them strong and resilient.

Strength training also promotes cellular growth, proliferation, and the survival of neurons, which helps all your muscles, including your brain remaining active, helping in preventing dementia.

Hip Fractures Common Among The Elderly
A thinning hipbone in the elderly is a major concern, this since any fall increases the risk of a broken hip, which can result in fatal lung clots from the immobilization.

It’s known that a portion of the elderly who suffers from a hip fracture don’t survive, usually from the blood clot. Statistics also show that the number of hip replacement procedures are substantially increasing.

This procedure is also alarmingly becoming common among younger people, which is a clear indicator that our lifestyles are becoming increasingly sedentary.

The increasing arthritis rates are also thought to be a contributor to the rapid increase of hip replacements, along with improper diets and a lack of exercise being the main culprits.

Keep in mind that one is never too old to begin exercising. Some are known to be well into their 70’s who start working out. It’s possible to gain significant improvement in balance and strength, range of motion, bone density, and better mental clarity.

Although there may be initial apprehension, working out can become a lifelong routine, and it’s recommended that everyone should get active, regardless of your age.

To Begin An Exercise Program
When first starting out, it’s advisable to consult with a personal fitness trainer, this to learn the proper techniques and form. They can develop a plan based on your goals, body type, and any medical conditions that you may have.

Keep in mind that you need to initially use caution, while also needing to exercise at a level that’s challenging to your body. Most will make the mistake of exercising without enough intensity, which has no effect.

Exercising When Older
One of the most beneficial along with safe ways to incorporating a high-intensity exercise program into your workout, this if you’re older, is by slowing down your movements.

This technique is known as slow weight training, which is also found extremely efficient in terms of time. All that you need is around 12 to 15 minutes of this super-slow strength training, usually just a few times per week.

It’s possible to achieve the same human growth hormone production using this method, as you would from 30 minutes of Peak Fitness sprints, which isn’t recommended for the elderly.

There are an increasing number of fitness experts who are proponents of this exercise technique, as many seniors are adopting the super-slow strength training method.

The Time To Get Started Is Now
There’s no better time to begin a high intensity based training program, known as HIIT, this especially if you’re middle aged, than right now. So learn more about HIIT, and its various different regimens that you can choose from.

There are compatible features when adopting a super-slow strength training program, while integrating a high intensity based training regimen, this as you age.

Combining Diet and Exercise Is The Key To Aging
Regardless of how old you are, a proper diet and frequent exercising are the foundational components which helps you live a longer healthier life.

The reason being that hip replacement surgeries now being performed on those who are as young as 40, which is traditionally considered an older persons issue.

These are the consequences and needs to consider, and the potential price that one may pay when aging, which can usually be cured by a stringent diet and a strength training program.

A diet with the proper protein intake is one part of the equation, as it’s vital for proper bone and muscle health. Too much of either however, can raise the risk of other health issues.

What’s recommended is increasing that amount by at least 25% percent for extensive exercise, such as walking or jogging up to a few miles per day.

What also needs to be taken into consideration is the quality of the protein. Most meats along with animal products are typically of poor quality, where the animals are usually mistreated, this by being fed unnatural diets of genetically engineered grains, this instead of fresh grass.

Balance Is The Key
The goal should be enough high quality protein but not going overboard, this derived from a variety of plant and animal sources. Then add a strength training program, this to boost muscle tone while improving bone health.

Super-slow strength training is recommended for those who are beyond middle age, as it’s safer than higher intensity exercises. It’s not recommended you become infirm with advancing age. You need to be proactive, and the earlier that you begin, the better off you’ll be in the long run.