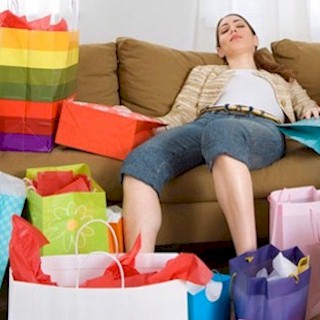 There are some during the holiday season, who’ll buy lavish gifts just for themselves, charge it on their credit cards, only to return them back in January, this before they receive their credit card statement. Is this an addiction or genius. All they’re doing is feeding their shopping habit.

When it comes to the rush that is holiday gift buying, what everyone feels is a bit anxious, as their budget becomes fully stretched out. What the majority will do is overspend, which means buying things that they can’t really afford. It can also be difficult to distinguish whether the spending is just seasonal, or if it’s out of control.

What compulsive spending does is leads almost everyone to debt, while ruining relationships. It’s the biggest cause of the January blues, which results in anxiety and low self-esteem.

What it creates are a host of mental health issues. So what you need is to determine if your spending has become an addiction.

Definition Of Compulsive Spending
Compulsive spending, which is also known as oniomania or compulsive buying disorder, is mindlessly spending far beyond what’s necessary or affordable. What it often does is causes personal financial debt.

The worst form are those, who engages in compulsive spending, this without suffering serious financial disaster, this because they can afford it. It’s still an addiction all the same.

What the Internet, and it’s evil stepchild social media does is constantly promotes a materialistic society. It can also become difficult to distinguish if it’s just impulsive “overbuying,” or compulsive spending.

Traits Of Compulsive Spending
The defining characteristic when it comes to compulsive spending, is the sensational feeling of the shopping being irresistible. What they’ll do is continue to buy, this even if it causes them personal, financial, or emotional distress. They just don’t care.

The worst case scenario being, that they can’t really afford to spend the money, but will buy things anyways, while getting very little satisfaction after they buy it.

Similar to other addictions, what compulsive spending does is escalates over time, this so they’ll get their fix, which is spending money they can’t afford. What they get is a “high,” once they go out and buy something carelessly.

How Spending Gets Addictive
All what being addicted does, is activates the reward centers of the brain. To become addicted, one doesn’t need to rely on drugs, alcohol, or to overeat.

What any addiction does is stimulates the release of dopamine, which instantly triggers the feeling of pleasure, which is a reward that’s similar to recreational stimulants. What you get is a natural “high” without taking a drug.

But similar to certain drugs, what it needs is increased spending to trigger the same amount of dopamine over time. So all that the compulsive spender at the department store or online is doing, is chasing that dopamine high.

All of the happy feelings that are associated with compulsive spending, does is provides a welcomed relief from anxiety, depression, or boredom.

Symptoms Of Compulsive Buying
If you know that you’re spending is out of control, or that it causes problems in your life, like that high credit card balance you can’t afford, then it’s time to seek help.

Some symptoms include:
• Spending a huge chunk of your income on discretionary purchases, resulting in huge amounts of debt
• Continuing to spend, this despite promises to stop, then hiding the purchases from loved ones
• You find more satisfaction making the purchase, than actually owning the item itself
• There’s usually a letdown or you feel shame, after purchasing something you don’t need
• A strong feeling that the next big purchase, is going to improve or alter your life for the better

You realize that you’re “using” this excess spending, this only to mask or manage all the unpleasant emotions that you feel, such as anxiety, irritability, depression, or low self-esteem.

What many will often do is use “retail therapy” to cure their woes. When it comes to compulsive spenders, retail therapy is the only method of coping with stress.

How It Affects Your Life
The most obvious harm of compulsive spending, is that it destroys your finances. There are some however, where they can afford to make endless purchases.

There are others who’ll just buy inexpensive items from the dollar store, which enables them to feed their addiction, this without having to go into debt. So it’s entirely possible to not experience financial distress, and be addicted to shopping.

What needs to be resolved, is the core reason why one needs to compulsively shop, such as nurturing the feelings of guilt or shame. There could also be relationship issues, or just feeling lousy.

The Causes Of Compulsive Spending
Compulsive spending, similar to other addictions, is to fill a void, a viable way of coping with pain, stress, trauma, and every other negative emotion that’s felt.

Those who engages in compulsive spending, all they’re doing is responding to a negative emotion, this by spending money.

Then right after the purchase is made, they’ll feel guilt or disappointment, which then compounds into further negative emotions, which results in more spending.

What’s known is that anyone can be vulnerable to overspend, as there’s a few traits and distinguishable risk factors. There’s usually a history of some type of previous impulsive mental disorder, or a previous addiction.

Ways To Treat Compulsive Spending
Unlike other addictions, what compulsive spenders can’t do is go “cold turkey.” This particularly when it comes to the holidays, when buying gifts feels mandatory, so quitting becomes difficult.

Instead, where treatment lies is being aware of and focusing on addressing the underlying emotions, which causes the compulsive spending. Cognitive-behavioral therapy becomes helpful, to understand the causes which are the triggers.

To Find Your Soul Mate You Need To Make Yourself Attractive