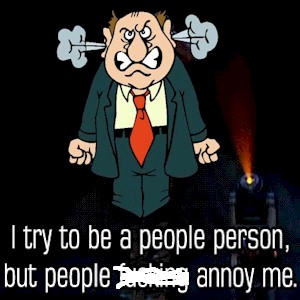 Insults, a mild form of bullying, where the giver feels justified to put you down for any reason, and if it’s a common occurrence can become an annoyance. There are varying degrees of insults, some light hearted, others just outright cruel or ignorant.

There are the verbal insults, which are directed right to your face or cowardly behind your back. Instances of indirect verbal insults include snide ironic comments or inappropriate jokes, mimicry, backhanded compliments, or false accusations.

Since our eyes and our facial expressions are usually able to substitute a reaction instead of speech, a cold glaring or constant stare, a false transparent exaggerated smile, or a smug raised eyebrow are examples of indirect verbal insults. Then there’s also the obvious physical insults which can occur such as punching or slapping someone in the face.

These actions can be either reactive or proactive in nature, while insults of omission can be common as well. For instance, omissions could include not deciding to invite or ask someone, not laughing at their jokes, not deferring to their rank, interrupting someone on purpose, or purposely avoiding eye contact.

The Best Ways To Deal With The Ignorance Of Insults
Getting Angry – Which may be the weakest yet most obvious primal response as human nature justifies the reason why:

• We acknowledge the insult and the insulter, allowing them to win by they getting under our skin
• We’re also suggesting or acknowledging that there’s a certain truth to the insult, and
• We’re admitting that it destabilizes or bothers us, causing us pain by getting our feelings hurt

Just Accepting The Insult – This may also appear like a weak response, but in most cases it can be the strongest that you can give. When someone happens to insult you, there are a few things that you should consider:

• If the directed insult is actually true, who or where it came from, and the reason behind it, was it unprovoked or unjustified
• If the insult is true, is the person who dished it out being reasonable, was the motive worthy or deserved
• Was the insult actually a helpful statement of fact, constructive criticism which can potentially help you

If that’s the case, then there’s no point taking any offense to it, whether it be from a sibling, parent, or a best friend.

Generally, if you have respect for the person who insulted you, then give some thought to the base of the insult and then learn from it if possible. But if you feel that someone insulted you without justification, then just ignore it.

It’s their own issue so don’t take offense of their hate or anger towards you which is similar to you not taking any offense if a child misbehaves, or a dog begins barking at you.

When You Should Return The Insult – There may be several issues with the insult itself, even if it’s cleverly disguised. So even if you’re not as sharp, clever, or witty when giving out your own “put-down” in return, it’s then unlikely to be able to constitute your best defense.

The issue with clever insults is that despite how smart it may appear, it will just bring you down to the same level as the insulter, which is most likely what they wanted.

What this gives them and their insult is credibility for being able to get under your skin, to irk you. In fact, any clever rebuttal should just be reserved for friends, and it’s only purpose should be for humor.

Is Using Humor The Best Rebuttal – Humor can be an effective response for a few reasons:

• It can undermine the insult
• It can pull the audience if there is one, on your side, and
• It can effectively diffuse the tension of the particular situation

At times, you can use humor by appropriately exaggerating or even adding to the original insult just to make a mockery of the situation and the insulter.

Should You Ignore The Insult Altogether – One of the downsides of using humor is that you need a quick reply and actually have a sense of humor which many don’t have. In contrast, just taking the highroad and ignoring the insult may be easier and also be a lot more powerful and more effective.

So if someone does happen to insult you and it’s unjustified, take it as a compliment as you’re doing something right, and they’re attempting to irk you somehow.

Project the feeling that they’re so insignificant to you that they don’t even deserve a response for the insult that they dished out to you, let alone take any offense to their pointless putdown.

Take Insults In Stride
So there’s really no point in taking offense to any type of insult. Taking offense exists not only in the remark itself but how you react to it, and any type of reaction, whether if it’s effective or not, are completely within our control.

It’s unreasonable to expect someone who’s boring or abusive to be anything else but boring or annoying since that’s all they’ve got. But once we bite and then choose to take offense or react to the behavior, we then only have ourselves to blame.