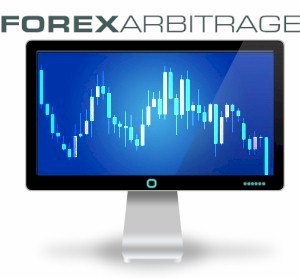 Forex Arbitrage when defined is taking advantage of the price differences of a currency pair between two different markets at the same time. The trader when it comes to Forex arbitrage, purchases currency lots in one market and then immediately sells in the other to make an immediate profit.

The transactions needs to occur simultaneously to avoid any risk of market movement. When a Forex arbitrage opportunity occurs, what it does is it helps in keeping the Foreign Exchange markets efficient because the traders will usually take immediate advantage of the constantly occurring small price differences. This way, the global Forex markets around the world are able to remain as synchronized as possible.

[ad#co-1]
In order for a Forex arbitrage to present itself and thus be profitable, there needs to be three separate factors which are in total sync.

• A specific currency pair isn’t currently trading at exactly the same price on the various major Foreign Exchange markets around the world. The expectations can vary from market to market as well as from trader to trader.

• The current price of a currency when measured against the other currencies will float with the market, and thus isn’t fixed to their futures price or any other controlling situation.

• The trades of two or at times three currency pairs needs to be executed simultaneously at the same time. Without this immediate and simultaneous trade execution, trading arbitrage will become subject to market movement risk.

When trading Forex arbitrage, it usually requires electronic trading experience as it takes advantage of the differences of the price in the various markets around the world.

The trader will also need a fast broad-band based Internet connection, the appropriate trading software, and trading accounts with several Forex brokers. The trader also needs to develop the skill or may already have the experience to instantly be able to spot price differentials and then be able to accurately and promptly execute the trades in order to gain the profits.

Look For Volatile Markets
Looking for Forex arbitrage opportunities is usually most successful when in extremely volatile markets.
For instance, an excellent recent example of volatility was the sudden and quick response of the Japanese Yen when the unfortunate earthquake and tsunami occurred on March 11, 2011, which completely devastated much of Northern Japan.

The initial expected response of most traders and banks was that the Yen would take an immediate fall in price value. This was before most of the heavy Japanese investors, the major Japanese banks, and the largest companies all began transferring their assets back to Japan.

Most of the the major financial players in Japan had the majority of their financial assets and instruments invested overseas so they could take advantage of the more favorable interest rates abroad.

But when the sudden need for more Yen was apparent after the disaster, most of these investors quickly responded by selling their T-Bills, stocks, and other offshore investments, and began buying the Yen.

As a result, the Yen then rose precipitously in price value until the G7 and the majority of the global central banks stepped in and threatened to intervene once a certain Yen exchange rate was reached.

Those who were trading the Forex for arbitrage during that time, all tracked the initial fall, then the subsequent rise of the Yen, and then the adjustment. This see-saw volatility as a result presented repeated arbitrage opportunities for the traders to profit.

The Definition of ‘Arbitrage’
Arbitrage occurs when there’s a simultaneous purchase as well as a sale of an asset. Profit from the transactions are realized from the difference in the price of the same instrument.

It’s a trade transaction which becomes profitable by exploiting the price differences of the identical financial asset, but on different markets or trading platforms.

Arbitrage is the result when market inefficiencies are exposed, usually from extreme volatility. It also provides a mechanism which ensures that prices don’t deviate substantially from its fair value for substantial periods of time.

The Risks Of Forex Arbitrage
The biggest risk when attempting to profit from Forex arbitrage is that the trades which were executed not being processed simultaneously at the exact time in the different markets.

Since Forex arbitrage can be more profitable when the market is volatile, the risk of a transaction going through while the other trade not getting processed can potentially increase due to the market chaos.

Considering the significant degree of leverage which most of the traders use when trading the Forex market, there’s also always the danger of exceeding the size of one’s personal margin account, resulting in hitting a margin call.

One other practical consideration when trading Forex arbitrage is how stable the traders internet connection is. Having the internet suddenly go down at the most inopportune time, such as after buying currency in one market and before being able to sell in another market, would be absolutely disastrous.

Another consideration is that there’s some trading skill-sets which needs to be developed when it comes to Forex arbitrage trading. Practicing paper trading allows the trader to be able to develop Forex arbitrage strategies while developing the specific skills which are need to profit from the arbitrage.