How To Manage Media On Your Android Using Windows Media Player 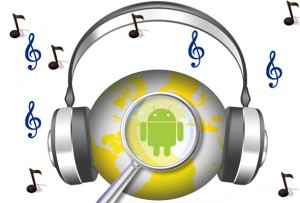 So if you own an Android based Smartphone, there’s a way to get an Apple iTunes type of desktop app for your mobile device. This can be done by using Windows Media Player, which allows the syncing of videos, music and images to your Android smartphone or any other device a snap.

The Android devices can be synced easily to Windows Media Player similar to the way that the iPhone or the iPad can sync to iTunes. This way, any Microsoft Windows user is able to transfer their favorite media directly between their desktop PC to their Android smartphone or tablet.

Steps To Syncing Windows Media Player
The first time that you connect your Android smartphone to your desk or laptop PC, the ‘AutoRun’ dialog box will instantly pop up and then prompt you to install the smartphone’s drivers, or you may also see a small helper app which should already be preloaded on the mobile device.

Next, run the installer which will loads the drivers that Windows needs to sync with your mobile device. Be aware as well as wary of further prompts which attempts to get you to download and then install other software or apps depending on who your wireless carrier is. The majority of these apps are useless and are not necessary or required to sync your smartphone to your computer.

[ad#co-1]
The Android OS Control Panel
If you’re not able to see the control panel window for your mobile device, then open up the Windows Control Panel. Then find ‘Devices and Printers,’ and then look for a listing for your particular mobile device.

Some of the Android smartphone or tablet devices may offer other options beyond the listed core choices. Windows will then automatically select all of the default apps which manages music as well as images, but you’re able to change them if you need to, just by clicking on the ‘Change Program’ under each option.

For the purposes of this tutorial, accept both of the defaults of Windows Media Player as well as the Windows Live Photo Gallery. 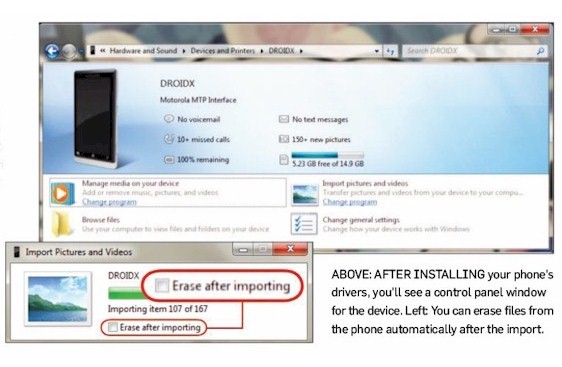 Importing Your Image Files
To import videos as well as your images from your smartphone’s camera, just double click on the ‘Import Pictures and Videos.’ Windows will then automatically search your entire smartphone’s camera roll. You will be able to add tags as well if you want, and then click the ‘OK’ to begin the import process.

Check the box if you’re wanting to delete the files from your devices camera, or just leave it unchecked if you want to keep them. When all of the image files are imported, a Windows Explorer window will then open to show you which images or videos you’ve transferred.

Syncing Media Files
To sync your media files, double click ‘Manage Media’ on your mobile device to begin syncing the media files. If you have some music files already on your smartphone which are not located in your Windows music library, then you’ll need to first transfer all of those items from the mobile device to Windows.

To do so, you will need to select your particular mobile device from the list which is on the left pane, then choose ‘Music,’ highlight your choice and then drag the files into the box which is marked ‘Drag Items Here.’ Then click the ‘Start Sync’ to transfer them over.

Once you have moved all of the music files from the smartphone to the desktop PC, go set up the syncing relationship by right clicking on the drop-down menu which is located beneath the ‘Sync Tab’ on the right-hand side of the window, and then click the ‘Set Up Sync’ tab.

Doing this will then open up a new window, giving a prompt for choosing how the Windows Media Player should deal with the data which is already on your mobile device.

To prevent the Window’s Media Player from wiping or deleting anything off of your smartphone’s data card, make sure that you choose the option to leave all of the data on your mobile device.

On the following screen, you will then be asked to name your mobile device; it already should have a name, but you’re able to rename if you want. Then ‘Click Finish’ to start the sync process; it will then match the media collection which is on your smartphone to your library, which depends of the extent that your smartphone’s storage capacity allows.

And that’s it. Whenever you connect your mobile device to your desktop PC or laptop, Windows Media Player will then automatically update the library on your smartphone to match the current music collection which is on your computer, or as needed.

Why Consumers Trust The Internet Over Other Media Sources

How To Promote Your Blog After Your New Blog Posting