How To Protect Your Kids From The Internet And Other Technology 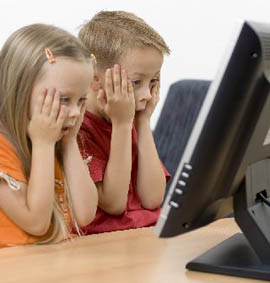 With summer just around the corner, your kids will suddenly have a lot more free time on their hands for activities such as the Internet, video games, television and constantly texting on their mobile phones. So the most important thing that you can do is to strategically monitor their screen and tech time usage as well as being aware of what content they are viewing. Setting up basic rules is an excellent way of letting your kids know what your exact expectations are. So try posting these rules close by the computer or TV as a reminder to everyone, and make sure that you enforce them.

[ad#co-1]
Television And Video Games Monitoring
The first thing that comes to mind is the violence, unwanted revealing content, and the inappropriate language. These should be your main concerns when your kids are watching excessive TV, or begin playing too many of those video games.

Watching too much television is closely linked to obesity, obviously because your kids are just sitting around motionless while tending to snack on junk food during this time. They are also constantly exposed to ads on TV which usually promotes all this unhealthy food, which leads them to eating more.

Doctors at Children Medical Centers are seeing an increasing number of young children who are referred to them for obesity or related health problems which are linked to obesity, such as high cholesterol or Type 2 Diabetes.

The very root of obesity happens to be a lifestyle management choice which points directly to feeding your kids better food, along with increased exercise and nothing else more than that. One of the key issues which needs to be looked at to prevent obesity in children is by increasing levels of physical activity on a daily basis.

Listed are a few steps on how parents can limit the time which is spent watching television and playing video games:

• Set a daily time limit and make sure that you and your kids stick to it. You can set an example by you limiting your own viewing
• Try keeping your television as well as video games out of your kids bedrooms. Make sure that you place them in visible common areas so you will be fully aware how often they’re used. Learn how to correctly block certain unwanted programming from your television using V-Chip
• Doctors suggest that kids under 24 months not watch any television at all since it’s too much of a distraction, and it keeps them from exploring or playing with others. The American Academy of Pediatrics also suggests that there should be no more than two hours of total television time per day for kids over the age of two. Make sure that you know the various TV as well as the video game rating systems
• Make sure that you speak to your children about the shows which they are watching as well as the video games that they play. Participate with them whenever you can

Try to come up with fun and exciting alternatives to watching TV or playing video games, such as playing an educational board game or playing an active “participation” type of video game, or just go outside and play baseball or ride a bike.

Mobile Phone Usage
Cyber bullying can be an issue and your kids may be exposed to it. There are constant “mean” as well as destructive messages or pictures that they can receive by email or texting. This also includes posting on forums or chat rooms on the Web.

Your children can also be extremely vulnerable to someone attempting to steal their personal identity online or pretending to be them. Cyber thieves actively steal passwords as well as sending viruses and young people are continuously being targeted.

Cyber bullying is becoming too much common of an activity and can be just as dangerous as any other type of bullying. These tactics usually escalates online because of the ease of anonymity, making it much more difficult for these career cyber bullies to be caught.

Mobile phones has obviously made life a lot more convenient for everyone by allowing us to stay connected to friends and families. Nearly every adult on the connected planet has one, and kids are now constantly asking for their own at extremely young ages. So here are a few tips to keep in mind when introducing a mobile phone to your child:

• Make sure that you show your children all of the basic functions of the mobile device such as making emergency calls etc. Also consider a mobile phone which offers “no-contracts” or “Pay As You Go,” which needs to be manually loaded with phone minutes. This is an excellent option that your kids can use when they’re out on their own
• Keep track of when and how often that the mobile phone is used. Make basic rules for what times as well as places that the phone can or can not be used, ie., no phone time during homework, dinner or after 10PM etc.

Make sure to tell your kids to be extremely careful when they’re giving out their mobile phone number. Explain to them that they should never give it out to anyone on the Internet.

Web And Computer Usage
It’s difficult to imagine or even remember what we actually did before computers or the Internet. But with any new technology, there are a few pitfalls.

Unfortunately, our kids are extremely easy targets for attacks, so it’s vitally important that we teach as well as track their activities when they’re using the computer, including:

• Make sure that you set daily limits for computer usage for leisure time activities and enforce it
• Place you computer in a visible central location somewhere in the house. Monitor your kids from time to time so you know what they’re doing on the computer or what Web sites they are visiting. You can easily do so by checking the “History” on the browser
• Consider installing some type of parental control software which blocks certain unwanted website content, keywords or activities
• There’s no doubt you’re familiar with social media sites, if not, make sure that you learn about them. The majority of these social networking sites has age limits. The major ones do not allow children 13 years or younger, so be aware of that
• Educate your kids about the present dangers of cyber bullying and cyber theft and stalking. Make sure you tell them to never give out any personal information such as names, addresses or phone numbers. Explain that everyone they meet online who they don’t know and are strangers should never be trusted under any circumstances
• Make sure that you learn how to efficiently use the computer yourself, so you can keep up with the latest technology
• Know where your kids hangout on the Web as well as who their online friends are
• If possible, try spending some time on the Internet with your kids, explain to them what’s acceptable as well as what’s not
• Know what your child’s user name as well as what their passwords are for each and everyone of their online accounts
• Know that your kids can access the Internet through mobile devices such as the iPod Touch, the iPhone or any other smartphone device as well as through most gaming systems

As there are a variety of ways which your kids are able to use as well as enjoy the Internet, television, computers, mobile phones and video games. The most important issue that you should keep in mind is to constantly monitor their usage, and always be aware of what they’re viewing while being not too intrusive about it.

Reasons Why Google's Android May Be Overtaking The iPhone

The Primary Sources Of Website Traffic And Targeted Customer Acquisition