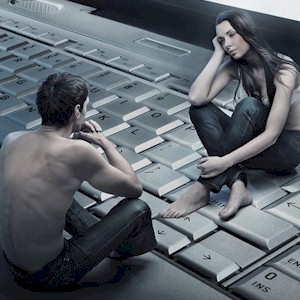 Don’t worry if in despair, as there are now over 7.4 Billion people on this planet, so the odds are good that you’re bound to meet your soulmate. What we see are a wide variety of new and interesting people on a daily basis. Some become friends, some become romantic partners, why does that happen.

On any given day in any dense metropolitan area, there are a variety of people that we pass on a busy city street, multitudes of people that we’ve never seen before. Some we’d like to know, others we avoid like the plague. So how is ever possible we can finally meet someone, in this dense urban concrete jungle.

We humans are constantly interacting with those we don’t know, complete strangers. The majority of them, we’ll never see again. But why is it that we get to know select strangers, that for some reason we have a bond with them.

What we do is search for partners deliberately. We go on the dreaded blind date, reluctantly join online dating sites, this in the hopes of capitalizing on random encounters. We rely on fate to meet the love of our lives, and with any luck, there’s a chemical reaction.

That Chemical Romance
Geniuses, biology, physics, the Internet, all can’t figure out the chemistry of love, why and what attracts certain people together.

One thing for certain is that proximity is important, as it wouldn’t be economically or physically possible to start romancing someone, who lives on the other side of the country or a different continent.

So it’s most likely someone who lives down the street who shares similar status, income, or ethnicity. They’re attracted to each other based on sociological grounds and convenience, ultimately connecting because they share certain qualities.

The Attraction Process
Life is too short to meet your true soulmate. You’re too busy, you’re too old, the timing isn’t right. So you settle for someone who “fills” most of the qualities that you seek for in a perfect partner.

The easiest method is online dating sites, where you can scan the faces of hundreds of potential mates per hour, all in the safety of your home computer. You bookmark the most interesting ones, a mechanical yet effective process.

But based on a recent survey, where happy couples were asked where they met their “soulmate,” just 5% percent confessed that they met their partner online.

So meeting someone for the first time, those real “face-to-face” interactions, still remains the best method of meeting someone new, which has a chance of survival, that could result in a long-term commitment.

The “Meet” Market
So the best solution for generating any results is to get yourself out there, out and about, and display the best virtues of yourself in social situations, this to attract the most perfect mate that you can.

Based on a survey that was conducted, some met their current love by attending live events, such as music festivals or sporting events, which shows that they have similar interests in common.

Other methods of meeting someone included charity, alumni, volunteer, or educational events, when meeting someone of interest, as eyes interlock, and the mystery of human chemistry overtakes.

All these methods make complete sense, this because others who attends the same seminars, fundraisers, church, gym, all share similar values and outlook in life.

Meeting someone at the workplace, this either from networking or another coworker, also ranked high, this since work is where most will spend the majority of their time.

Working offers the opportunity to interact with complete strangers for prolonged periods of time. Arms bump, minds meld, then there’s the “Are you interested in a drink after work.”

Meeting Someone Interesting
Once people find each other, there’s the aloof moments of breaking the ice, realizing there might be potential, as they “check” off most of the qualities that they seek in another person. What then happens after this encounter, is they mutually like one another.

The most common activity after the pleasantries, after being newly introduced, is to exchange phone numbers. Some go directly into the holding hands and kissing stage.

Some even admitted to sleeping with someone immediately after they’ve met someone new, this for a test drive of things to come. Most true romantics, know exactly what they’ve found, as they fell in love on the spot.

What these survey respondents confessed, was the spontaneous combustion, fireworks, which occurred once they’ve met the “one.” The majority however, claimed they didn’t feel any of these sensations.

The Accuracy Of The Love Process
What some wonder is how accurate these claims are, if they’re even true, if it’s just creative writing from someone who’s wanting how their empty love life to turn out.

After all, any survey, anyone can state whatever opinion they want, as no one checks for validity, or who they are, as these opinions are taken at face value.

Most of these questionnaires are kept anonymous, so who knows where a bit of fabrication is added to spice things up, making them romantic, a fairy tale setting.

They might prefer to not admit that they’ve met their partner online, or are perhaps just embarrassed that the encounter didn’t work out, or that they just can’t find someone in real life, so they just fantasize about it.

What an anonymous survey offers is a forum where one can feel completely safe, expressing or disclosing whatever they want.

But there’s really no advantage or incentive to fabricate either, as finding one’s soulmate is one of life’s greatest conquers, and something to be proud of.