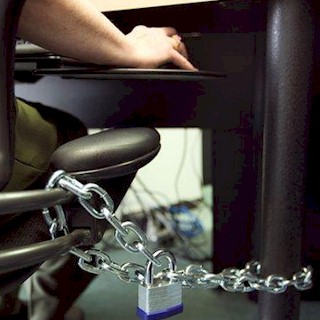 We’re all conditioned to choose a career, remain at that job, gain seniority, and then retire. So most will get the best education they can, this to get the best possible job in the concrete jungle that’s the corporate world. They get their degree to earn as much money as possible working at that J.O.B, but most aren’t satisfied.

What they do is continue to convince themselves that they’re happy at the job. What persists however are intuitive thoughts, that there has to be more. What nags is a yearning to be or do something else. What overtakes however, is the security of a steady paycheck.

So the years pass by as they work their jobs, while occasionally revisiting their yearning. They start an “idea” journal, listing what type of business that would be ideal for them, entertaining the thoughts about being their own boss, breaking free and becoming an entrepreneur.

To Want More
What they have is a lack of drive working in the corporate world, the proof being the constant thoughts of doing something different. What develops is a subconscious separation, which eventually comes to a head.

It could be a particular experience at work which leaves the feeling of betrayal, being passed for that promotion, or the constant office politics.

What many will come to is a crossroads, to continue this charade or to cut bait. What they’re pushed to is the brink, the conflict becomes unbearable, anger ensues.

The individual decides to quit and gives their notice. They’re proud that they finally stood up for themselves, but they’re also petrified.

Reality Strikes
Once the anger wears off, fear immediately sets in. An anxious dark void ensues. What’s realized is that in two weeks, they won’t receive the security blanket known as the paycheck.

Incomes are lifelines. They pay the mortgage, feeds the kids, fuels the cars, pays for that vacation. The feelings and thoughts of no paycheck brings horrors of becoming homeless and forced to live on the streets, to become a bag lady.

Some become so scared that they get physically sick to the stomach, as the anxiety and uncertainly is more than they can bear. What eventually happens is they succumb to this fear, crawl back and beg for their job back.

Working For A Living
They feel fortunate that they’re immediately rehired or find a new job, feeling grateful and relieved. Then once this relief wears off, that thirst to becoming an entrepreneur strikes again.

They realize they’re right back where they started. Stuck in a job they despise and can’t stand, once again feeling trapped. This time, what they’re planning is a better escape.

They decide that if they’re going to quit again, they’ll be prepared this time. So they begin attending business start-up seminars, where they learn the develop a core, to write a business plan.

They’re now on a fact finding mission, they’re moonlighting to learn and figure out what it takes to start their own business.

The Break Out
Months, perhaps a year passes, this since they’re first failed attempt to leave their job. Then once again, determined, they decide to give notice to resign for the second time.

The feelings of deflation and impeding doom immediately strikes, this after revealing their plans they want to start their own business, being the reason for quitting.

During the exit meeting they’re completely defeated, as they’re told that massive capital is needed to start a business, implying they’re not qualified to consider becoming an entrepreneur, where the failure rate is staggering.

The business idea that they had is completely crushed. So once again they succumb, and decide that leaving the job is a mistake, and decide to stay.

It’s Not Who You Know It’s You You Know
Anxiety and indecision overwhelms. They hate their job but can’t leave. This time they planned and tried, made a valiant effort, but still couldn’t quit.

In a revealing moment of humility and desperation, what they asked themselves was, “What do I need to do?” The answer they got, was they needed to change and grow from the inside out.

They realized that everything they’ve done to prepare themselves for this transition was all external, outside of them. They did nothing to address and release their fears, to develop confidence and esteem to face the unknown.

Living Inside Out
So they got busy again, this time on an inner journey. They looked at their fears and developed “what if” scenarios that they could live with. What they did, was started doing something different every day, this to get familiar with change.

They developed spiritual direction and meditated daily. They slowly began to change from the inside out. The business plan was now to become a consultant. This time, they prepared themselves better to step out into the unknown.

To Become Empowered
The notice to quit was given for the third and final time. They knew the time was now or never. They were better prepared to get through the initial shock of waking up every morning not getting paid. They were completely determined to not go back.

The first few weeks following their exit from the workforce, they did nothing. They were completely exhausted, both mentally and physically.

Then they began to vision themselves working as a consultant, and began a workable project shortly after. An opportunity then suddenly appeared out of nowhere. A contract was signed, and they were on their way.

A decade has now passed since they left their job, and has now transformed into a successful entrepreneur. They dared to dream and it ultimately paid off. They’re now an author and an Internet marketer. The experience taught them anything is possible.