You Mad? Why Getting Angry Is Actually Good For You To Fight Disease 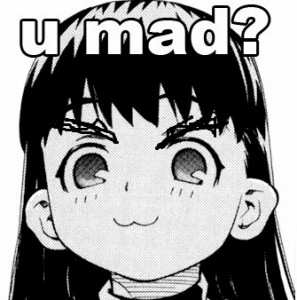 “I never get mad,” says a famous movie line, “Instead, I just grow another tumor.” All in good humor of course. It has however been proven how often certain people who gets chronically ill, all fail to display any emotions regarding their state of health.

It’s quite common for these people to become paralyzed of showing certain appropriate natural “negative” emotions when they become sick, most commonly not getting angry.

This pattern holds true for a wide range of illnesses, everything from multiple sclerosis to rheumatoid arthritis, chronic fatigue syndrome to inflammatory bowel disorder type of diseases. The patients who were diagnosed with these various diseases all had one trait in common, they seemed almost incapable of expressing themselves outwardly.

But instead, they all seemed to be driven by a sense of compulsive responsibility directed towards the needs of others and not themselves. One common denominator is that they all had difficulty of just simply saying “no.” The results from these studies, across various continents, confirmed that the prevalence of these patterns were identical in those patients who were all suffering from chronic conditions.

[ad#co-1]
Suppressing Anger
Suppression, or holding back or displaying any degree of anger can contribute to the onset of certain significant diseases since the mind and the body can’t be separated.

All of the emotional centers of the brain are connected directly and are linked deeply with all of the critical immune center points throughout the body.

The expression of anger as an emotion serves the exact same defensive role as does the immune system, which is to protect our boundaries as well as to keep us from becoming overwhelmed by any external forces which are out of our control.

When both our emotions as well as the immune system are healthy or neutral, they combine to serve as a repair function. What they do is work in tandem to help us heal when we’ve sustained or experienced recent trauma, or when something has suddenly gone wrong internally.

Emotions And Our Immune System
Our emotions and our immune systems as stated are interconnected, this part and parcel of the exact same system of repair as well as defense. So when we decide to suppress any areas of that system, such as displaying anger, then the other parts down the chain will become suppressed as well.

There’s one well known study of proof which was based on a group of women who all had a certain identical illness. This particular group all had extreme difficulty in expressing their anger towards themselves, their illness or their physicians.

So as a result, all of these women who displayed no emotions, all simultaneously had diminished activity of a group of immune cells known as natural killer cells or NK. They all displayed much poorer survival rates than did the women who expressed their anger and feelings a lot more clearly, and as a result, their “natural killer cells” were able to actively attack the tumor a lot better and quicker.

So Show Your Emotions Get Mad
So what that proves is showing certain emotions such as anger plays an essential preventive measure against fighting disease, based on the diseases awareness of which emotions that we are experiencing. This is based on the natural healthy expression of that emotion.

These are the same qualities which are also important to the healing process of those who has been diagnosed with that illness.

There’s really no quick route or fix towards expressing emotional awareness however since the majority of us may have lost the capacity to show any emotions in our early childhood.

We should begin by actively practicing paying closer attention to our bodies which includes: sudden flutters or movement in the abdomen, tension or aches in the neck, constant headaches, muscle pain which is unexplained, our voice suddenly becoming hoarse, sudden outbreaks of rashes or cuts, poor or bad sleep patterns.

These symptoms as well as other common phenomena can usually be symptomatic of some type of underlying emotional disturbance. So during these times, we should be asking what events in our lives, such as our work or our relationships, we have failed to pay closer attention to. Why, as well as what is our body saying “no” to?