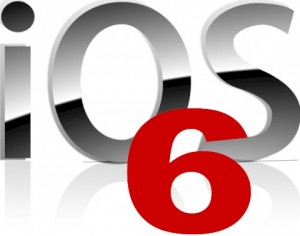 According to Apple, the designated launch date is expected to be the fall of 2012, perhaps in conjunction with the much anticipated iPhone 5 as well as a smaller mini-iPad tablet, are you reading this Jason.

The biggest feature of the new iOS 6 is perhaps the Maps app with Apple’s own cartography navigation. They have previously been using Google Maps since the iPhone debuted back in 2007.

Other features include functions such as an expanded Siri voice recognition system which offers expanded language support. There’s also a built-in Facebook feature built directly into the OS, which provides integration with Calenders and Contacts, allowing users to post directly to their Facebook accounts from the iOS 6 Notification Center.

The Maps App For iOS 6
The Maps app feature can potentially be significant for local retailers since millions of consumers who currently own smartphones use a map service to locate local neighborhood businesses.

Apple claims that their Maps application will store information on 100+ million businesses around the world, providing “information cards” which will contain ratings from Yelp, user reviews and available photos or promo deals for that business.

Apple iOS 6 To Integrate With Facebook
The other significant feature of the iOS 6 is the built-in Facebook integration. This will allow consumers, provided they own a mobile Apple device, to be able to sign in once and then post from the various apps which Apple has built directly into the devices.

For instance, the information of the users Facebook Friends will be kept completely up to date across all of the other Apple operated mobile devices, this automatically updating all of the details and changes in Contacts once they change. This also includes birthdays as well as scheduling events in the Calendar. Consumers are able to “Like” content directly from iTunes as well as from the App Store and see what their friends are recommending.

Other Significant Features Of The iOS 6 Operating System Include:
• There will be enhancements and improvements to the Safari mobile web browser. This includes the ability to read lists offline, the uploading of photos, and the ability for full screen viewing
• There’s expected to be support for FaceTime video phone calls available from the various cellular networks. At this time, the FaceTime feature is only currently available on Wi-Fi networks
• The iOs 6 offers the ability to be able to set up a VIP mailbox. This feature will allow users to quickly view messages from other user designates as VIPs

The iOS 6 is expected to be available as a free update for current owners of the iPhone 4S, the iPhone 4, and the iPhone 3GS, as well as for the iPad 3, the iPad 2, the 4th Gen iPod Touch. It’s designated target release for user consumption is the fall of 2012.