Why Eating Yogurt Containing Probiotic Bacteria Can Be Dangerous 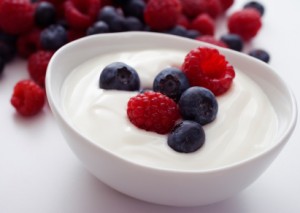 So they tell us that eating yogurt, which contains probiotic bacteria, is good for our health. There’s also a long list of other popular foods which are consumed around the world which contain various amounts of fermentation as well, such as, kombucha, kefir, kimchi, sauerkraut, etc.

All of these foods happen to contain active yeast along with living bacteria. Once consumed, the food which contains the bacteria enters the passage of the stomachs and then combines with the other literally billions of bacteria specimen which are also resident in the intestines.

It’s estimated that close to 90% percent of the cells in the human body are actually various forms of bacteria, which are all able to survive inside our stomachs.

The majority of this bacteria happens to reside in the colon, and the dominant species which is found there can determine how thin or how overweight we are. It can also dictate how vulnerable to illness we may be under stressful situations.

The proportionate amounts of bacteria found in our stomachs, however, can by difficult to analyze since they don’t survive outside of the intestines, so they can’t be cultured or tested under lab settings.

What Are Probiotics
If you’ve recently bought yogurt lately, then you have most likely noticed the word “Probiotic” prominently displayed on the label. The reason is because research has shown that we need “friendly” bacteria such as probiotics in our body to be able to remain healthy.

The particular strain of bacteria that’s extremely beneficial to our health is probiotic bacteria. What probiotic bacteria does is it inhibits the growth of “bad” bacteria which can cause disease, particularly the ones which are responsible for bowel or gastrointestinal infections.

These probiotics are thought to be able to modulate the production of certain inflammatory particles which directly affects how pathogens can stick to the walls of our stomach. However, no one really understands how they’re able to do so, or know what it is they do.

There’s also evidence that probiotics affects the well being of the brain as well. One particular study displayed levels of anxiety being reduced with the administration of probiotic strains, B. longum and Lactobacillus helveticus.

Since certain disorders which can affect the gastrointestinal tract seems to regularly co-exist with certain mood disorders, such as depression or anxiety, the probiotics effect on better stomach health may have favorable implications.

Probiotics Can Be Good… But Also Bad For You
So for good reason, health conscious consumers are increasingly using antibacterial based products, anything from soaps to yogurt which contains the good bacteria. Any product which are designated to effectively wipe out germs internally as well as externally. Most don’t realize, however, that some of these products can be a hazard to our health as well.

They can potentially be harmful because some of these products not only eliminate the bad bacteria which makes us sick, but also kills off the healthy bacteria which keeps us healthy. This “good” bacteria is what you want to preserve, as it lines the walls of the intestinal tract, helping to keep us vibrant while aiding in the digestion process.

What the elimination of this good bacteria does is it leaves you vulnerable and exposed to potential yeast infections, invite new unwanted bacteria, and promote the existing bad bacteria which may have survived the attack.

This is the reason why some claim that antibiotics can at times be dangerous to our health. Although drugs are able to fight off bacterial infections, such as strep throat, they can also eliminate all bacteria, both the good and the bad, without prejudice.

The Good And The Bad Bacteria
There are actually good germs which are out there, known as “probiotics.” What probiotics does is it prevents the growth of salmonella, yeast infections, E. coli, and a host of other potentially harmful organisms swimming around in our stomachs.

The most common as well as the most well known of these probiotics is lactobacillus, which is usually found in cultured dairy food products such as buttermilk and yogurt. Another common strain is bifidobacterium, which is usuallly found in supplemental form.

But There Are Studies Supporting Probiotics
There are numerous studies which supports the importance of probiotics when it comes to our health. One particular study found that lactobacillus and bifidobacterium helped in slowing down excessive weight loss in those who had inflammatory bowel diseases, such as Chrohn’s or ulcerative colitis.

Another report indicated that probiotics may potentially be able to bolster the immune system, fighting off carcinogens which are present in our bodies, and possibly preventing colorectal cancer.

So the interest in probiotics is on the rise as it was also found that children who had upset stomachs, which may have been caused by antibiotics, improved once they took lactobacillus. It should be noted however that children who are aged three or younger consult with a physician to ensure that Probiotics is the proper treatment for them.

Otherwise, doctors and health practitioners are promoting the consumption of yogurt mixed with various fruits such as blueberries and bananas for better health.

How Forgiving Can Heal Your Mental And Health Issues