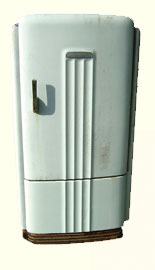 Life for you is just clicking along nicely and then all of a sudden, out of the blue and without any warning, you find yourself time warped back in time, reduced to being a hunter and chief food gatherer.

Suddenly you’re not able to enjoy all of the conveniences of modern civilization which you would otherwise take for granted. We’ll, ever since your trusty fridge has been on the blink, that’s how it feels. So here’s a common household appliance which wasn’t even available until the early 1950s, that thing which was first known as the “ice box” when it was first invented. This because the covered box was originally powered by a big block of ice. Now it’s an absolute essential need in the household such as the Internet or plumbing.

So imagine what would happen if any type of disaster struck and your fridge went clunk. The eggs would go bad, the beer goes warm, the ice cream would turn to milk and all the green produce would wilt away. All the meat would have to be devoured, as would the fresh chicken and the fish. The freshly bread baked without preservatives would turn green with mold.

[ad#co-1]
So what would there be left to eat. There would be the rice and potatoes for a while, dry pasta, and other packaged goods. But man can’t survive on just starch alone.

Although Ramen noodles and Mac and Cheese both have brilliant histories, they’re primarily reserved for college freshmen and newbie bachelors attempting to maintain a steady easy diet.

There would of course be all the canned and prepackaged foods which saved a lot of starving appetites. The idea of canning food was actually first introduced back in the 1880’s in North America. The complete process however of putting food into bottles or cans dates way back to the French, to around 1810. This dramatically expanded the range of ones diet, this much earlier than the trusty fridge.

Poor Appliance Life Spans
So the biggest question for most these days is why do all our appliances have such short life spans. The refrigerators, vacuum cleaners, stoves and microwave ovens which our parents owned lasted for decades. At times, you couldn’t get them to stop working so mom could go out and buy a new one. The refrigerators of today however just lasts on average for around five years! So what’s up with that?

Generally, the prices of appliances like any other technology or electronic device has fallen. Remember the $1000 microwave ovens in 1987. Today you’re able to buy one for $79 if you so choose. Those options just simply didn’t exist back then. Over time, because of economic development, the market has created what’s now known as the “low end.”

So you could say that spending the same amount which your parents did, with inflation included, you should be able to buy a fridge which would last for 15 to 20 years. But that just doesn’t happen any longer. This is because we’re all now conditioned to buy based on price rather than quality.

So why is it that consumers would now rather select “cheaper” less durable products over higher priced quality products. This is because we would rather have the “bells and whistles” over durability. We’d rather have our fridges equipped with water or ice dispensers instead.

We would also now prefer to spend less so we can get newer appliances more often. This is true when it comes to microwaves. Your mother’s model, which she purchased over 20 years ago, still works beautifully. But now, you end up buying a new one once every few years. While your moms was a significant investment, yours was on sale at Walmart.

Still, a five year life span for a major appliance is pretty lean. Most of the refrigerators just a couple decades ago had a life span of around 15 or more years. Ideally, shouldn’t we be paying less but receiving the same or even better durable products.

Blame The Regulators
So the more serious and real question should be regarding government regulations which should force these appliance to operate longer and more efficiently.

Ever since 1970, when the EPA was first formed, it waged a relentless battle on the refrigerator. It successfully banned chlorofluorocarbons, which was a coolant that harmed the environment. It also regulated how to dispose of old expired fridges properly. They also regulated how much energy refrigerators should be using, so eventually they actually used 25% percent less power than they did decades ago.

If everyone complies to what the government wants, they will conform towards the “Energy Star” ideal, which results in using up to an additional 35% percent less energy than they did in 2000.

But look out, what replaced chlorofluorocarbons or CFC is what’s known as tetrafluoroethane. In exactly the same method on how the environmentalists decided to wage war against CFC, they are now after tetrafluoroethane. It’s now even banned in certain Eurozone countries for all new cars. The United States is also now beginning to restrict it’s usage a lot more as well.

So are all these regulatory forces the blame for the poorer quality, as it’s easy to see how that’s possible. If a fridge is limited to using so much limited energy, the power usage will then be allocated towards what the consumers are wanting, such as the ice makers and auto-defrost, rather that using it towards better machine components which makes the fridge run longer.

Remember the old days when on a hot summer day, opening the fridge door would provide a much needed blast of cold air which would rush out of the refrigerators. That wonderful feature is now gone. Now they seem to work just like solar operated calculators and they’re almost just as silent.

Had the market decided to go down this path, it would of been unobjectionable. The government regulations however and their justified energy usage stance distorts the tradeoff between the price and quality or durability. They’ll mandate what our values should be rather allowing us to inform the manufacturers what they should be.

So is it possible to comply and use less energy while saving consumers money on the price, while without reducing the quality. Why wouldn’t the manufacturers just do this on their own. Why does the government need to get involved by issuing its various subsidizing or penalty campaigns.

The reason for all these regulations can be perhaps pinpointed to its roots; Which is the thinking that private enterprise doesn’t properly serve the consumers well. They having no incentive to manufacturing a product which has a longer life span or that it’s actually better for people. This is false however, and the long history of the mighty fridge proves it.

The free market made it possible for us to be able to store huge quantities of fruits and vegetables, fresh meat, dairy products and much more inside this big ice box in our homes. As with any other modern convenience today, we really don’t appreciate it until it stops working. And if the government decides to get in the way, we may just eventually find ourselves on a diet of potatoes, instant ramen noodles and canned goods.