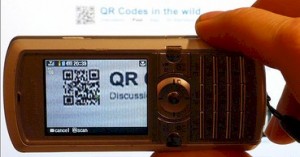 So you’re a savvy consumer walking through the mall or down the shopping district of your city, and you notice something that’s intriguing to you in the window. You see a huge black and white checkered square which looks like a crossword puzzle. Right next to it, there’s a sign on the window which reads, “This Is The Best Thing That You’ll Do Today.”

So you being a smartphone owner, whip out your mobile phone, open up the QR (Quick Response) code reader app and then aim the smartphone camera directly on the square QR Code. A second later, the app scans the image.

The smartphone then automatically opens up your web browser and links you directly to the stores mobile web page where it says: “Congratulations, you’ve just won a free bottle of vitamin water just for viewing this page.”

This is becoming a crafty way of using mobile technology which has been directing shoppers into various stores or services to instantly collect their free gift or discount. This is just one way in which local retailers can instantly interact with mobile consumers using QR codes.

Connecting With QR Codes
Say that a retailer places their QR code in a magazine ad or the daily paper. Once you click on that code, it directly leads to a product or service information page or even a video that’s featured on their mobile website. These readers using their smartphones can also “click” to purchase products or services as well.

Stores with signs or banners featuring these 2-D bar codes can immediately lead the user to online videos which promotes selected products. These videos can feature their own 30 second Ad featuring athletic men or women in action using your product as well as discussing or giving testimonials on any product that they want to promote. They can host these videos or images directly on their site or even on YouTube. For some retailers, it’s been reported that doing so accounts for over 22% percent of their online business.

Expanded The Usage Of QR Codes
The next step of using QR Codes is expanding to place them on individual products such as the back of business cards, t-shirts or a coffee mug. The consumers who are using their smartphones to scan these QR codes are those who are inclined and willing to try new mobile technologies. You should be able to experience substantial number of scans as well as additional mobile traffic to your mobile site and eventually draw that traffic to your store.

Bridging The Online/Offline Gap
There are a growing number of retailers who are recognizing the huge potential of using QR codes as well as other 2-D bar code formats. What they’re doing is providing a bridge between mobile device users with cash in hand, and then combining it with the Internet and the traditional “brick and mortar” businesses.

Retailers have been attempting to accomplish this in a variety of ways for a while now. Trying methods such as using web connected kiosks, online printable coupons and rebates, printing out online customer reviews and posting them on their store windows etc.

But it’s because of the proliferation of smartphones with Web connectivity and built in digital cameras which now makes it easy for the consumer to be able to instantly access Internet based content from: store windows, magazine or newspaper ads or the side of product packages.

All that’s required is downloading and opening up the free QR scanning app, pointing the smartphone camera directly on the QR code and then the phone’s web browser will instantly redirect the consumer to the vendors site on their screen.

The ability which the consumers now have is to instantly comparison shop or getting more information while shopping in the store is one advantage of using QR or 2-D bar codes. So vendors placing these codes directly on their goods in the stores, they are then able to potentially transform a small retail outlet into a big showroom.

At the same time, once a consumer accesses the web via a smartphone, they can also navigate to other products as well. There are tremendous opportunities once these QR codes are set up in place. This is the reason why web based retailers as well as direct marketers are acting quickly to be able to exploit those opportunities.

QR Codes Popular Elsewhere
QR codes has been extremely popular in Japan and Asia for close to a decade while being used in Europe for a few years. But they just recently began to appear and get popular in North America.

What’s made these little square codes interesting and popular is that there’s tens of millions of consumers, close to 100 million, who now has smartphones which has web access and are able to scan these QR bar codes. While there are actually a few formats of the 2-D bar code, the most common are the Quick Response or (QR) code and the Microsoft Tag.

Consumers are quickly beginning to get acquainted and familiar with 2-D codes. Over 6% percent of mobile smartphone users actually scanned a QR code on their mobile device. The majority of consumers who happened to scan these codes were between the ages of 18 to 34 years and predominantly male (64%).

The study also found that the most popular source as well as location of QR code scanning occurred when the users were reading newspapers and magazines or when they’re placed directly on product packaging. The most common place where they happen to scan are while they’re at home or in a store that’s featuring a QR code.