Caffeine Addiction And It's Relationship To Chronic Fatigue
Skip to content 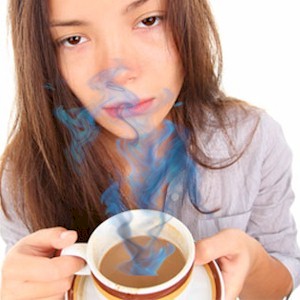 Coffee is the preferred choice used as a daily pick me up, the favorite beverage that’s most commonly used to pump up the symptoms of low energy. Its activate ingredient caffeine, does is over stimulates the adrenal glands, this to inject the feeling of alertness.

But realize that this instant jolt, is just an illusion when it comes to an increase in energy, this because it activates the hormone adrenaline. Over time, what the excessive injection of caffeinated substances which enters the body, can cause is an adrenal addiction.

What this results in, is the glands will begin to naturally produce less adrenaline on its own, this until it stops altogether, which then leads to symptoms of chronic fatigue. The reason for this is because the adrenals fail to regenerate itself.

Give Me More Coffee Now
For those who are addicted to caffeine, and who’s not, can potentially be on a dangerous slippery downward slide, and may need to reconsider their intake. This because it’s believed that it can become more difficult to recover later on.

On a daily basis, what we appear is to be behind in everything that we do in this modern busy world that we live in, that we’re “human doing” rather than “human being,” this just to make ends meet.

So as a result, it becomes difficult for anyone to break a habit, this especially one like coffee, which most enjoy because of the benefits that it provides.

To Snap A Habit
What breaking a habit itself, especially one that you enjoy, requires is substantially more energy to overcome it, this than to keep the habit itself.

What’s also known is that it’s a mental state of mind, an entirely mental battle with oneself, where we’ll generally surrender to the familiar routines that we do, this rather than mustering up the strength or courage to break through and break that habit.

Mental fatigue is increasingly becoming more common, and it’s become a huge factor when it comes to the overall energy of the body itself.

So just even thoughts about changing a habit does is requires energy, which can become tiresome for someone with chronic fatigue syndrome.

The Need For Energy
The general response, the biggest excuse to the thoughts of quitting caffeine, is that it’s residual effects are needed for energy, and most would admit that it would be extremely difficult to survive their day, especially the morning without a coffee.

So it becomes the crystallized fear of fatigue which encodes the belief that one can’t overcome it, or won’t or can’t do without it.

There are however ways to overcome fatigue itself, this particularly chronic fatigue, while also being able to recover from long-term caffeine addiction.

To Reduce A Habit
The effective progressive elimination of caffeine needs to be a programmed gradual process, this ideally a slow smooth transition to avoid the potential risk of the body going into shock.

The most common side effect of a strict elimination of caffeine, this especially after an extended period of use, are headaches from withdrawal, which is a clear indicator of addiction in the body.

Generally what’s recommended is a sustained period over a month or two, which is a reasonable goal, this to set the foundation for the complete transition away from caffeine substances.

To Break Away From Caffeine
The most common culprits when it comes to caffeine content are coffee, tea, sodas, and chocolate, all which should be consumed in moderation.

However, once significant amounts are ingested on a daily basis as they can be, the body is then thrown out of its natural state of balance, away from the physiology of its energetic and physical state.

Addiction To Caffeine
The contributing factors that’s exacerbated by caffeine addiction can become compounding, as extended use can contribute towards complications of surface breathing, a lowered immune system, and hormonal imbalance.

Once becoming aware of these symptoms when reducing caffeine intake, will make the transition of withdraw a lot smoother.

Treatment for this or any related condition is often formulaic, which targets the combination of its root stresses that are responsible for its existence.

Surface Breathing
Surface breathing is how most breathe, which is often too shallow, and what changing breathing patterns does is requires a conscious effort.

It’s well worth the discipline to breathe as deeply and efficiently as possible, this because what deeper breathing does is oxygenates the blood more efficiently, while facilitating the removal of toxins found in the blood stream.

Increased oxygen is a major factor which improves the entire bodily system, organs, and all the vital forces which are necessary for fully functioning holistic health.

Hormone Imbalance
Hormone imbalances in the thyroid, pituitary, and pineal glands are contributing factors for fatigue related issues. The hormones found in these glands become easily imbalanced, this because of the increased adrenaline in the system.

What results is their functions become interrupted by continual caffeine consumption. If it continues for long periods of time, this imbalance can become disruptive to all the systems in the body.

The Immune
The immune system can be strengthened by improved deeper breathing, which removes toxins. If the immune system however has been suppressed for a long period of time, it may need immune enhancing substances for the body to regain its harmonious balance.

Getting proper rest, vitamins and minerals, and drinking plenty of water are the keys when it comes to restoring the body back to health, along with eating healthier.

Although natural nutritional remedies can be excellent aides for maintaining a healthy lifestyle, they shouldn’t be substituted for the qualified care of a physician.

Considering both modalities becomes important however, this when seeking the proper cure for substance recovery.

Why Taking Omega-3 Can Be Beneficial For Your Brains Health