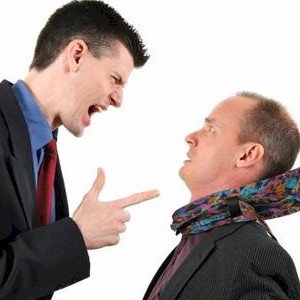 The need to confront others is a part of doing business, or dealing with life situations. It’s not always pleasant but a necessary task, which becomes easier with the right attitude. What’s common is that queasy feeling in the pit of the stomach, this once you need to go head to head to resolve certain situations.

What it can do is haunt you for days, this before you need to face the inevitable. Then once the moment arrives, once you finally confront this person, what they’re wanting is to initiate resolution. What usually begins are the usual friendly pleasantries, acknowledging each other with introductions.

You can begin chattering small talk about the weather, the weekend, or something that’s work or business related, something you both agree on. This is an excellent starter, this to find common ground before you attempt the subject at hand.

To Present Your Message
What you don’t want is to become overbearing by presenting your argument immediately, as if you’re attacking them, although it might be natural instinct to do so.

You’re most likely stewing and steaming on the inside, thinking of everything that’s wrong with the situation, or what they’ve done. You’ve been thinking of what their rebuttal is, while you’ve prepared yourself with every conceivable comeback.

Practice Makes Perfect
Rather than jumping all over them, you’re better off to review what you’re going to say. Even if you can’t barely contain yourself, try to remain as calm as possible.

You need to remain neutral, this to create an environment where there’s an equal exchange of discussion that takes place. You need to remain mindful by staying calm, reminding yourself to listen without interrupting.

Visualizing being calm becomes helpful, this by seeing yourself having a favorable resolution. So after the pleasantries are over, as awkward silence sets in, you can then initiate the discussion by asking the first question.

The First Question Wins
Know that the one who asks the most questions controls the conversation. So ask a question such as, “From your point of view, tell me what happened?” Then you’re controlling the situation. Take mental notes while you formulate your next question.

What doing so does is makes the other party feel you’re interested in listening, and that you value what they say. What you’re wanting is to jump in to make your point, but restrain yourself from doing so. Instead, be sincere and listen thoroughly to what they have to say.

Let Them Speak Before Responding
Once they say their piece, once they fume, then allow a few moments to pass. What this does is tells the other person that you’re giving what they said serious thought and consideration. That you’re carefully evaluating what they’ve said, that you’re thinking about how to reply.

Once you do so, make sure that you always begin or end with another question, this to clarity certain things you don’t understood. By now, you know what their major issues are, and can prepare yourself to respond.

Offer An Apology
Before you respond, realize if you need to offer an apology. Do you need to tell them that you’re sorry, that you were insensitive and out of place, hurt their feelings, embarrassed them, damaged their reputation.

Apologizing is an excellent strategy to gain their respect. If you don’t have anything to apologize for, then find something that’s your fault to be sorry about. It becomes vitally important that you take some type of blame for something.

Then thank them for expressing their point of view, and they opening up and sharing what they did. Tell them that what you’re wanting is to gain their trust and respect. Be genuine by choosing your words carefully.

Begin Your Response
Then begin your rebuttal. Tell them that you understand what they’re saying, that you’re both on the same page, and have the same goals in mind.

That you’re interested in working with them to resolve the issue as fairly as possible. Show that you’re as passionate as they are about the issue.

Be Slow And Deliberate
Begin slow, talk as if you’ve thought things through when arriving at your decision. Never point fingers, physically or figuratively. Instead, discuss what you think will best resolve the situation, to make things better.

If you’re rebutting to a serious situation that’s your fault, then overcome your pride and tell them that you’re working on the issue, and to patient with you. What most will understand is human error and will give you a break, this especially if you admit you were wrong.

If you defend yourself by not taking any responsibility, then what you’re doing is working from a point of weakness. You’re going to lose respect, along with the issue that’s being discussed.

To Resolve Situations
Resolving sensitive issues can prove to be difficult, as they can often quickly spiral into making matters worse.

Instead of just sitting around stewing about it, or gossiping about it, choose to talk about it head on, this by confronting them for a resolution, better ideas, or new solutions.

Every time that you go through conflict resolution, you gain experience and confidence. It’s better to expose and resolve the situation as soon as possible, rather than allowing it to boil beneath the surface.

Dissolving disagreements immediately, does is more than just solve the issue. It can also help you to become more familiar with that person, this by getting to know them better, possibly becoming an advocate.

To make them an ally would be the ideal compromise. You can do so by preparing in advance, while remaining humble. During this process, you’ll gain respect from them, while also finding a resolution that you can both agree on.