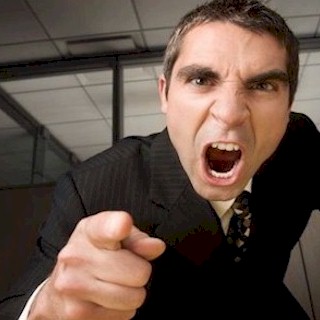 The role of the manager in any organization is to fix mistakes, to overlook operations, to control function and people. But what we know is that some bosses will go beyond their duties, and allow their authority to influence your livelihood. This just to flex their hierarchy muscle, because they can.

What a narcissistic boss with a big ego can do is step beyond their borders, decide to make it personal by reducing you, by verbally abusing you. Whatever your reaction may be, whether you tell them off or you walk away in shame, is what they’re looking for. They will put you down, just to proclaim they’re better than you.

The satisfaction of you standing up for yourself and landing a verbal punch that they deserve, is something you can’t afford to do. It becomes impossible to reason with them, as your welfare is on the line. So what you need is to react by choosing your actions as carefully as possible.

Annoying Boss With A Big Ego
They can be “me first” cold-blooded tyrants who want total control, expects total loyalty, while not giving back any respect in return. What those with a big ego wants, is to be noticed and feel special.

The more egotistical that they are, the more they become addicted to feeling power, which means they’ll go to greater lengths to get this self gratification. To feed this addiction, they’re willing to cheat, steal, lie, abuse, and completely manipulate.

An egotistical boss will place conflict ahead of getting along, which results in they becoming arrogant and argumentative when challenged, always focused on winning at all costs.

What an egotistical boss will do is take all the credit for any type of success, while lashing out and blaming everyone but themselves when things don’t go right. They’re elusive, as they can appear calm and collected, but becomes a time bomb once someone crosses their path.

Emotional Hot Head
What they have is a short explosive fuse. Like any other disorder, egotistical bosses will show differing degrees of behavior. What they’ll do is degrade you with insulting remarks, or they can suddenly snap at you for no apparent reason.

What they’re doing is displaying their insecurity. This by disguising themselves when demeaning their unsuspecting target. They can also put out their feelers, and decide to micro manage.

The egotistic boss however is usually given the benefit of the doubt. Is their behavior to motivate the employees to work harder, or to get a project completed on time.

Or, do they have personal issues, where they mindlessly lose track of perspective, and allow their narcissistic behavior to take over.

Dealing With The Egotistical Boss
Your welfare, your livelihood and lifeline which is your job is on the line and at risk, if you happen to snap yourself, and lash out some of the medicine that the egotistical boss as been laying on you. This is a bad idea.

So how’s the best way of dealing with this tyrant boss, while keeping your job and sanity? What you first need is to ensure your security. Every organization should have a resource, a process in place, this to keep you safe.

You can begin by documenting everything, which includes the circumstances of the incidences, the dates, along with the details of the violation or abuse, which you can present to human resources.

Tracking The Incidents
Since there’s now technology that’s readily available, you can easily and efficiently record and time stamp these occurrences, as doing so is convenient.

One effective way, is writing down the information of the incident, and then sending it to yourself via email. This especially if you’re still collecting evidence, or you’re not ready to forward this information regarding a particular boss or incident.

It also becomes important to consider whether human resources will actually even help or care. If they happen to have a history of ignoring the bad behavior of their managers, you’re then better off to develop an exit strategy for yourself, or handle things on your own, if possible.

Becoming More Assertive
For the less caustic encounters, such as needing to deal with an emotional hot headed boss, what’s suggested is to consider “blocking the pass,” this to calm everything down.

For instance, if your boss happens to be constantly complaining about your performance, ask them a direct question that’s personally related to them, this to get the focus off you.

What’s recommended is saying something tactful such as, “You seem to be a lot more on edge about this project today. Is there extra pressure that you’re feeling, something that I can help you with?”

Match Them
Since what most egotistical bosses are interested and concerned with, is getting their next big win, what’s suggested is finding ways to get along with them, this to get ahead of them.

During these times when they’re being reflective or collaborative, thank them for being so. Tell them how and why it’s helpful to you. Just don’t be too obvious or sarcastic.

Also, don’t go out of your way to ignore that egotistical boss, as all that will do is cause anxiety. Never feed or stroke their ego, just to make them happy. All that does is just feeds their addiction, making them more arrogant.

What you need is to preserve your job first. You may have your ideal career, but unfortunately have an egotistical boss, who’s disrupting your work and life.

These are the casualties of needing to work with different personalities in the workplace, dealing with the human condition of “me” first gratification. What’s needed is to deal with it the best way you can, this for a healthy working environment.

10 Alternates To Wheat If You Have Celiac Disease