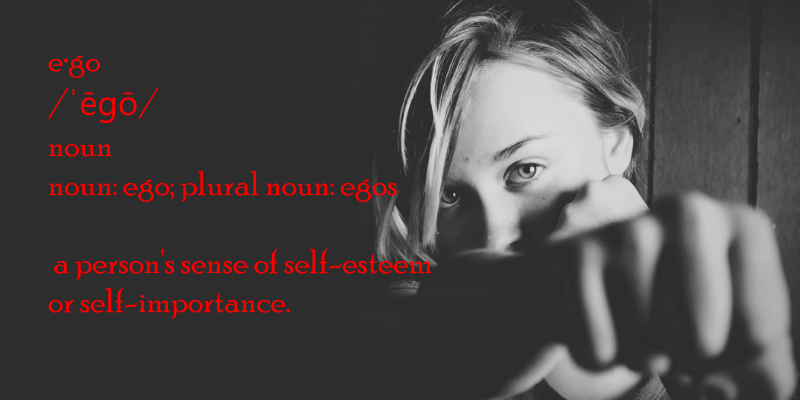 You allow your ego to take control of your life, as you surrender to it, as a safety mechanism for your insecurity. You may think that you’re not good enough, you don’t measure up, so you create a mask of diversion.

Your ego protects you as you pretend how great you are. You genuinely think you’re simply better than everyone else.

What the ego in humans is in charge of, is mediating immediate impulses and desires. Much like a circus squawker, with responsive action which believes are socially acceptable.

Yet, those with huge egos, constantly fails to back up what they claim, so it’s nothing more than an illusion.

What the ego does, is acts on first impulse to what’s most self-serving to them, the “me” first mentality. Anything that provides instant gratification or is beneficial.

It selfishly feeds itself first and foremost, with disregard for anyone or anything other than themselves.

“Greed is good,” some say. But it can also tear down individuals, relationships, even societies. It’s considered normal however, to want success, possessions, to gain security.

What’s not normal is for it to become insatiable, to obsess over it. In fact, this type of behavior is the definition of narcissism, the graduating phase beyond having a big ego.

Stop the impulse of always wanting to acquire more just for yourself. Instead learn to show gratitude by being humble towards what you already have.

2.) – You Dislike Others Who Succeed

Someone else wins, gets promoted, gets married, gets that big sale, achieves more than you. What’s your honest initial reaction? Are you genuinely happy for that person, or envious.

Those with big egos, don’t like others who achieves success, especially if they feel it should of been them.

That they deserve it more, they should get all the attention and the glory, feel they were wronged, the spotlight should be on them.

Even if you don’t feel like congratulating someone, do so anyways. You will feel better doing so, and the universe will begin opening more doors for you as a result.

3.) – Always Pointing Attention Back To Yourself

Attention seekers all have gigantic egos, while their personalities are not usually that interesting, rather drab. What those around them get annoyed with, is it’s always about them.

They have a need to always be the center of attention. This at parties, meetings, during conversations, they feel the need to dominate and always be right. Too bad that they’re so boring.

Realize this attention hoarding behavior, is counter-productive and obnoxious. So develop the mindset of giving others the opportunity to be heard. It’s not always about you.

Regardless of how smart you think you are, how good looking you are, how talented or skilled you may be, no one cares. Realize there will always be someone, who will be better or more successful than you.

Comparing and competing only succeeds at one thing, and that it makes you upset into a rage. All while potentially undermining any progress you’ve made in life. Just do the best you can.

Instead of constantly comparing yourself to others, focus on what you’re able to control. This includes your effort, uniqueness, and persistence. Then you will stand apart from the crowd.

Feeling appreciated is healthy, as we all want our contributions and achievements to be recognized. Those with big egos however, ramp this up another notch by verbally demanding it.

You see this everywhere. At work, socially, or at home, as it becomes the “look” at me show.

A coworker or relative constantly, incessantly brags about everything they’ve achieved to get acknowledgement. This to feed their tiny self-esteem.

The only respect you need is self-respect, knowing you’ve given your best today, should be enough. If others recognize your efforts and contributions, then great, thank them.

The ego acts as a shield, to defend you from the unknown or the unpleasant. For those with inflated egos, they’re offended by any attack on their personality, thinking they’re being picked on.

Constantly being defensive can damage careers, relationships, and personal growth. It also makes you look insecure, while you become extremely critical of yourself and others.

Instead, take the effort to actively listen and learn to accept constructive criticism, as that’s usually all it is. Those who criticizes you, it’s not out of contempt or meanness, and it’s rarely personal.

7.) – You Never Help Others If Not Beneficial

We live in a culture, which is self-serving and individualistic. Unless one becomes mindfully conscious of having empathy towards others, it becomes automatic to behave selfishly by default.

Those with big egos, only think to better their own self, their own welfare. What’s in if for me.

If a circumstance or situation doesn’t pertain to them, or it’s not worthy of their time or effort, they’ll just ignore it.

Society defines this as preferred status, being a “snob.” The result being, a degradation of the social moral contract. This is indifference towards suffering, while placing emphasis on being materialistic.

Just do something positive for those who aren’t as fortunate as you. Do so without being asked to, even if it feels like a chore. Never assume the notion that since you’re better off than them, you’re superior.

8.) – Setting Goals That Are Unattainable

Setting goals has proven to be a powerful productive action, which excels one towards superior excellence. It’s human nature to want accomplishment, and the rewards which comes with it.

However, those with a big ego will set unrealistic goals which becomes counterproductive, which are often made out of pride.

Regardless of how unrealistic they are, egotists will set these goals to demonstrate their arrogance. Then they hide or blame others if they fail.

Setting goals are excellent, but being realistic when constructing them are more important. Do so by setting attainable mini-goals, once you’ve achieved the previous ones set out.

The big ego has high expectations, but only for themselves. They believe they’re better than everyone else, and they will constantly let you know.

So what someone with a huge ego and low self-esteem will obsesively do, is attempt to bully or manipulate others to their favor.

When it comes to crafting this manipulation, egotists may throw a compliment towards you, or degrade you somehow, to get what they want. They make their target feel either grateful or guilty.

Regardless of the situation, never attempt to manipulate anyone as it appears obvious and petty, and you’ll usually be exposed. You’ll then lose the trust and respect of everyone.

Best Ways To Beat Anxiety In A Busy Frantic World