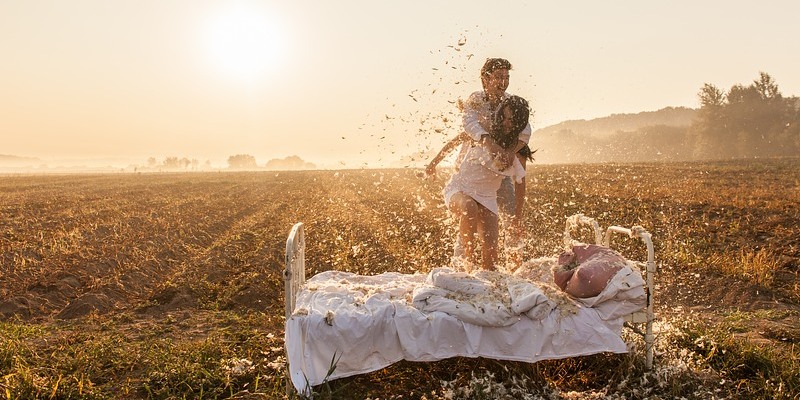 What the brain does the instance we wake up from a long slumber, is it battles itself from getting bored and falling back asleep. So we drink plenty of coffee to stay alert, do cardio exercises, constantly look at our smartphones for signs of life or aimlessly surf the Internet.

We go on a quest, to search for known stimulants for a jump start, which will entertain our mind.

The conscious alert brain has no particular purpose or aim, it just floats in the environment seeking to be stimulated, to be directed.

What it will continuously do is revisit previous experiences, have flashbacks, scan for new exciting opportunities, attempt to solve problems, which kicks in the creative juices.

Fortunately these days, the boredom gaps get filled in quicker from external sources, this thanks to the various gadgets of technology such as the Internet, which provides entertainment for everyone.

So keeping the brain occupied and engaged becomes a lot easier, which also blunts our ability to think for ourselves, or learn something new.

The best “ah-ha” moments appear once the mind is silent, when there’s no distractions. This could be when sitting quietly by yourself, or when lying in bed right before falling asleep.

Entertainment can be mind blowing awe. Their construction are scientifically designed, tailored to make us yet better people. There are a variety of tactics which activates various triggers in the brain, keeping us interacted.

Why Romantic Partners Remain Drug To The Brain

As opposed to our need for lots of friends on Facebook or a lot of likes on our latest post, what it does is serves as a social order of evolutionary purpose.

It’s our purpose and drive to be liked and to find real true genuine love, which evolves us into the quest for reproduction.

What’s located somewhere in the remote regions of the brain, is an extremely small area that’s responsible for the love response.

This feeling of love and being loved, which is more intense than just “liking” someone, is what our heart constantly seeks.

The sensation of love, that pang in the groin, the hunger of being infatuated is a “gut feeling” which is manufactured by this area of brain.

So for those lucky enough to be genuinely in love at this moment, instead of they “thinking” they’re in love, what they feel is a natural “high,” similar to eating sugar.

The Gag Reflex… Are You Getting Aroused Yet

Most begin by not being in the mood for having sex, to eventually getting turned on and aroused.

For that to happen, for it to elevate into lust, the entire process is instinctively taken over by animal magnetism.

This is based on thousands of years of evolution for us humans. It’s also usually the female shrugging off any advances as they want to be left alone.

So the males constantly get the “cold shoulder,” all in the attempts to reproduce.

Then eventually it’s also usually the female of the species in the animal kingdom, who willingly gives in provided they’re not forced.

The reason being, having sex is initially disgusting to them, the grunting, sweating, the bad body odor being the biggest turnoffs.

How are there now over 7 billion plus people on this earth, since our original thought of human interaction is disgust, when doing the “hump.”

The most logical explanation, is there’s a temporary loss of senses, which activates the lust, which eliminates the disgust factor, and “doing” it actually becomes enjoyable.

This activates a particular stimuli, which weakens the defenses and hesitation in the female.

From the perspective of our brain which doesn’t know any better, what’s been discovered is that watching a captivating movie, and dreaming are both extremely similar experiences for the mind.

So there you are sitting in a pitch dark movie theater munching popcorn.

This sensation to the brain, is extremely similar to sleeping in your bed and having vivid dreams.

The only difference being, that we’re wide awake in a movie theater.

What the brain sees on the screen however, registers a similar response as if you were in a deep sleep, and dreaming it.

The movie producers have now perfected the movie making process knowing this, to emulate the actual visual and audio, to what’s known as “sensori-motor” processing.

This is the exact area of the brain, that’s associated with analysis, self-awareness, and dreaming.

What the experts claim, is that this particular region of the brain, known as the prefrontal cortex, is what allows us to get lost in the movie, and gets us in that dream like state.

Why We All Love Music

Music has become a human emotion and an universal love.

How it affects the brain of certain people however, are as varied as the music sounds, which is highly dependent on the personality of the listener.

There are some, who will get actual “chills” up and down their spine listening to a certain musical piece, which is an actual medical condition.

Most however aren’t sensitive or privileged enough to feel such sensation.

The core personality metrics such as conscientiousness, openness, and neuroticism, to experience music so intensely are measured on these dimensions.

It was found that those who are more “open” to experiences, related closer to those who felt the chills, when listening to their favorite music.

Those who scored high on openness, tended to be more creative, curious about various things, while having active imaginations.

So if you happen to get the occasional goosebump yourself listening to Pink Floyd, then you’ll most likely feel the same in other artistic mediums as well.

Every Breath You Take Reveals More Than Ever

Having a needle poked in your arm for blood tests at the clinic, or having other intensive forms of medical diagnosis to reveal certain health issues, may soon be something of the past.

This once the bio-markers in the exhaled breath sample is gathered then analyzed.

So in the past, if you’ve ever needed to get a blood test for whatever reason, all you may need to do in the future, is just provide a “breath” test, this provided there’s some type of volatile component.

For experts researching this area, they claim that breath tests may eventually be more accurate than doing the actual blood test itself, when detecting certain types of illnesses.

The 5 Consequences When Reacting To The Scarcity Mindset