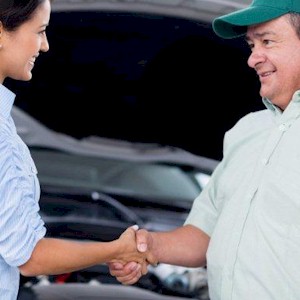 What most will associate negotiating with is a transaction, usually involving money for goods exchanged. Everything that you do on a daily basis is a negotiation. Agreeing to pick up the kids from school, or what time you agree to have dinner this evening.

Negotiation is found useful when you’re looking at a used car, or looking for a house you’re interested in buying. What you need to know is if there’s any defects that exists if they’re not visible. You need to rely on the sellers word to disclose any deficits.

But we know the first thing people do is lie, this to cover any faults if they exist, this by pleading ignorance. So “Buyer beware” remains true. The burden of discovery remains on the buyer, this to flush out the truth, this before any money changes hands.

First Get Them On Your Side
What sellers have is a difficult time lying to those who they like. So what you need is to build rapport with them, this the instance that you meet them for the first time, and get them on your side.

Rapport building techniques can include immediate physical cues such as a warm smile, slight tilt of the head, or a friendly handshake, as these nonverbal actions are considered “friend” signals.

A subtle eyebrow flash, moving the eyebrows rapidly up and down, which usually lasts a split second, or approaching someone with a quick friendly handshake, shows them that you’re not a threat.

What slightly tilting the head does is exposes the carotid artery, which subconsciously signals that you trust the other person, as you’re exposing a vulnerable part of your body. A quick smile releases endorphins, which makes everyone feel better.

The golden rule is if you’re wanting someone to like you, make them feel better about themselves. Doing so just takes a few seconds, and it begins with nonverbal displays.

Sellers tend to give better deals, or will tell the truth more often to those they like. If possible, meet several times to reinforce rapport, which increases the odds of getting a better deal or flushing out deceit.

Find Something In Common
Finding common ground can be easy when negotiating on something. Both parties already have something in common, as both have interest in the mutual transaction of the item.

If you’re wanting to buy a used car, deflect the seller into a conversation about their favorite cars in general, or other shared interests. Talk about the history of cars, such as the various ones you’ve both owned.

Initially avoid asking any detailed questions regarding the car for sale, this until basic rapport has been established, and the seller likes you.

Ask Questions Which Are Direct
Sellers become more reluctant to commit lies of omission, this versus telling lies of commission. So if you don’t ask the seller direct questions, they’ll conveniently avoid faults by omitting certain information.

But if you’re direct and on point, then they’re required to deliberately lie to hide the faults. Lying makes most uncomfortable. For instance, rather than asking, “Is this a good car?” Be more direct by asking, “Does this car have any mechanical issues?”

Force Word Qualifiers
What asking blunt yes or no questions does is it forces yes or no answers. If the seller doesn’t answer with a “Yes” or a “No,” then they need to scramble by using word qualifiers, this to give the illusion that they’re telling the truth by modifying the question.

Equivocating isn’t a “Yes” or “No” answer, but instead a hedge on the truth. The truth is either true or it’s not. If the seller attempts to hedge the truth, then the answer usually isn’t true. A partially true answer also isn’t a true answer, thus making it false.

They Respond With “Well”
You ask a direct “Yes” or “No” question, and they respond with a “Well,” which means that the seller is preparing to give you an answer other than what you were expecting.

Asking Direct Questions
The buyer is looking to purchase an used computer:
Buyer: Has anything major gone wrong since you owned the computer?
Seller: Well, no, not really, but the hard drive crashes on occasion
Buyer: So the hard drive isn’t working properly?
(A direct “yes” or “no” question)
Seller: All computers have issues, so that’s why you should always back up your data

The buyer asked a direct yes or no question. The response was “Well,” which means the buyer is getting an answer they weren’t expecting.

What the buyer wanted to hear was a “No.” The words “no not really” are word qualifiers. What “not really” means is that there’s issues with the computer.

The seller then tries to minimize the problem by saying all computers crash now and then. The simple answer the buyer was looking for was, “Yes, but the hard drive crashes sometimes.” This is the true answer, but reduces the probability of the sale.

The seller then avoids answering the buyer’s second direct question, this by citing the general issue that all computer users should always be backing up their data.

To Narrow Down
By using just a few simple questions, what the buyer was able to discover was that the computer isn’t worth buying, or is worth a lower price, this to compensate for the cost of a potential new hard drive.

Focus intently on the seller’s answers which concerns you. It’s your money so you’re putting yourself at risk, so it’s better to lay judgement, this by quickly recognizing the signs of subliminal deception.

Knowing all of the tricks and traits could save you time, frustration, money, and angst, this especially when negotiating to buy preowned goods.