How To Ask For And Get Exactly What You Want Everytime 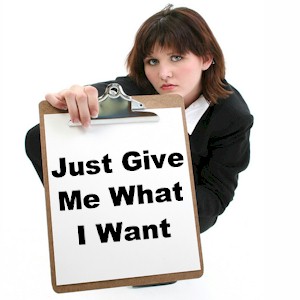 The first natural instinct as infants is to cry to get whatever they want, which is either food or a cleanup. Then growing up as kids, we realize that if we complain and sulk to mommy, we’ll generally get whatever we want.

As adults, if we begin throwing the same temper tantrums whenever we’re feeling deprived, usually, we won’t get what we’re after. So instead, we learn to alter our pattern and behaviors to suit the situation which fills that particular need.

Some of us will become manipulative towards others when we want something met, this especially under various circumstances. It’s also been discovered that certain people will become timid and have a difficult time when it comes to certain situations, such as asking for a raise for instance.

The Influence Of Marketing
What the shrewd marketers do is they’ll either manipulate or influence us to want something that we don’t actually need. For “goods” that we actually do want, such as laundry soap, their role is to then draw us to their particular brand.

The most successful of these marketers are the one’s who have completely refined the art of convincing us as consumer to unwillingly say “yes,” when we originally had the mindset of no or a maybe.

When it comes to our lives and relationships, what we attempt to do is look for better ways to have those we come in contact with, accede to our wishes.

In a real life setting, what we’re constantly doing is attempting to influence others to do things we want them to. We’re wanting someone to give up their seat on a crowded bus, we want a particular birthday gift, or we want our friends delicious spaghetti sauce recipe, etc.

For the majority of our lives, we want something, or want to be treated special, get a favor done, or want more money. What would be ideal then is knowing the steps to get these “wants” fulfilled in our favor.

How To Influence Others To Do What You Want

• Be As Honest As Possible – One of the most annoying things is the door to door vacuum cleaner salesman, who would do anything they could to get their foot in the door so they could give you their canned sales spiel. At times, you’d end up buying whatever they were selling just to get rid of them.

It’s almost like a reverse bait and switch. Buyers never like to be sold to, so once they do agree to buy something, they find it harder for them to stop themselves, even if they don’t need the product, or it’s too expensive.

Similarly, someone who needs a big favor done, will usually ask for a smaller favor first, and however effective that may be, it can make the other person feel resentful towards the person asking, feeling that they were duped.

If it happens more than once, it will eventually lead towards a “no” since they’re catching on to their manipulative methods. So the best method is to be as honest as possible to get what you want, by explaining exactly why you need it.

• Be As Reasonable As Possible – Nobody likes the “foot in the door” approach where you agree to a certain price, and then the salesman will attempt to bump you up for more money, even if they expect a “no” from you.

Then they follow up by asking for a smaller amount then they were originally expecting from you. So in order to avoid further negotiation, you agree to the smaller amount.

Using this method, they begin with an unreasonable large amount, so the actual amount which you end up paying then appears small in comparison. This is a common marketing tactic which is effective, but it can also backfire, especially if it’s personal.

• Never Pout If It Doesn’t Go Your Way – This particular childhood tactic no longer works if you want your way. If whatever you ask for is a resounding no, and especially if you know the person, the odds are good that you’ll get another opportunity.

But if you act resentful, you’ll then come across as petty, immature, and whiny, rather than coming across as someone making a reasonable request which may have a chance of getting fulfilled, if the circumstances are better or are more favorable.

Sulking over a disappointing outcome will also lower your self esteem, forcing you to ask yourself whether you should of even made the request, which most likely had no chance of being fulfilled.

• Consider Their Needs As Well – When we want something from someone, what we’ll often do is concentrate on “me” first, before we even consider what the other party is thinking or feeling.

If someone looks stressed out or preoccupied, then the odds of getting what you want isn’t good. So unless it’s an absolute emergency, it’s all about picking the right time to ask.

If you also procrastinate and not ask, then you’ll begin questioning your own insecurity, or inadequacy, which prevents you from stepping forward and asking for something.

• Know Exactly What Your Going To Ask For – After a thorough self evaluation, make a list of reasons, mentally, or write down what your request is going to be. At the very least, organize your thoughts so you’ll know what you’re going to say ahead of time.

This way, you won’t get rattled, forget, or get embarrassed. Also, if you’re unable to come up with enough reasons, then it may be possible that your request may be too unreasonable.

If you’re not able to determine whether it’s worth requesting or not, then consult with a friend to review the reasons, which should help you decide better.

Honesty The Foundation For Any Effective Weight Loss Effort