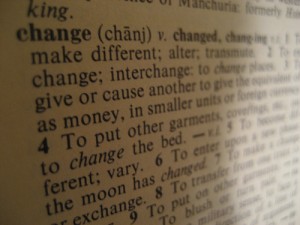 Changing how we look or feel on a daily basis doesn’t seem that drastic. Most likely, we’ll look at ourselves in the mirror and find that we look the same as we did yesterday or the day before. What we’re able to change however is our cosmetics such as our hair style or clothing.

Then when you reflect back or look at photos which were taken five or ten years ago, the differences in our appearance can be drastic, as change is one constant that we have in our lives which we can’t control. Knowing this, how come were so surprised when these changes do occur.

When younger, our parents will generally reward us for mastering basic human skills such as self-discipline or proper hygiene. Then our educational system will groom us towards adulthood, providing progressive levels of reinforcement, knowledge and security.

Education gives us the confidence and belief on which skill sets or talents that we have in our personalities that we need to exploit based on our aptitude, so we can create a successful working life and become settled.

Then as we begin to age, what we’re ultimately measured by is our mental as well as our material gains, but we’re not judged on our stability, our losses or our vulnerabilities.

[ad#co-1]
When The House Of Cards Begin To Crumble
The most likely and the primary reason why people become devastated when the familiarity and routine of our lives that we’ve built up is somehow disturbed through unforeseen circumstance such as unemployment, loss of a loved one, disaster, accident, disease, divorce, and other forces of sudden upheaval.

We believe that we accept and encourage change in our lives provided that the “spin on the wheel” transition is favorable, such as winning the lottery. But when change happens to be an unpleasant one, the lifetime of conditioning that we became accustomed to suddenly becomes suspect, which unleashes the darker designs of our imaginations.

There has been a lot written about change and transition which occurs in our lives. That every transition will usually begin when something is coming to a close, and then the end will start again with some type of a new beginning.

During these gaps where endings end and when something new begins, it can be a discomforting adaption and experience which the majority of people would just rather avoid, but it’s an essential part of personal growth and development.

So why begin at the end some will argue. Changing jobs, sudden illnesses or moving to a new house, along with a variety of “smaller” endings will disengage us from what we’re familiar with. They break up the old habits which served to reinforce what our roles were and what patterned our behavior.

So When The End Is Near
When the closing of a big or small ending of a part of our life is near, there are a few fundamental tasks which must take place in order for one to successfully move on towards the next chapter of our lives.

First is disengagement, separating oneself from the previously familiar event or lifestyle, then dismantling, by letting go of what’s no longer needed or relevant, then discovering what’s no longer making sense, then reevaluating one’s new identity, and then finally there’s disorientation, which is a sense of potentially losing touch with ones reality.

But once these various stages of endings are complete, the next step of progression may be just as uncomfortable but a neutral learning stage which can feel like a void between time. This is when everything feels as though things were going just fine for you, but you really don’t know who you are anymore or how you should be behaving.

Most people would just prefer to skip this transition stage. But attempting to go past this neutral void is a mistake. The majority will then miss the vital insights which places them at risk of making poor decisions in the future.

Since this neutral state may be discomforting, the new change can potentially be anti-climatic. There’s usually no parade or red carpet to welcome this new change, but a mere faint indication that something is vaguely different.

Then The Change The Transition Is Complete
Then there’s a new noticeable tone in the air, that new and exciting but unfamiliar fragrance in the breeze. Although some may feel invigorated and excited by new beginnings, it will often take a bit of time to adjust to a new situation or identity.

A new start, a new change is usually considered a positive move by society, such as moving to a new country, getting married, or giving birth. But it can be extremely stressful to the one that’s affected as they need to immediately adjust to a new unfamiliar landscape, lifestyle or situation.

Although no one is able to escape inevitable transition, especially those events which are out of our control, such as a unforeseen illness, the way that people are able to cope with change varies depending on a variety of factors.

So to demystify transition, it doesn’t need to be that overwhelming or scary. When we face our fears and liberate ourselves from them, we can then move forward courageously into the wild unknown, banking important life lessons and experiences from every step we take to move forward.