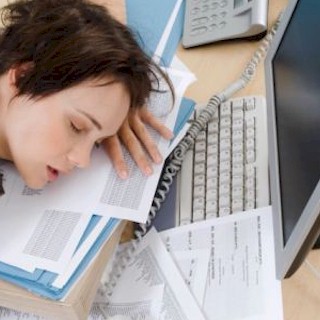 Mom used to scream at us. “Johnny, you’re sitting too close to the TV, you’ll go blind.” This when we we’re just a few feet away from the television set decades ago, as the flickering bits of light were poison to our eyes, which may of or may not of blunted our ability to see later in life.

Fast forward to today. The average individual sits just inches away from their blinking digital computer monitor, the majority up to 8 hours a day. No one really knows the health risks that the current technological era poses to our eyesight. This computer time is spent sitting at work, from home, or while commuting.

Our eyesight is one concern, but the bigger concern is how sedentary that we’ve all become, this because of the digital age.

Sedentary is defined as overall inactively, or prolonged periods of sitting, which elevates health risks because of the lack of dedicated body movement. For the majority of people, being sedentary has become a way of modern life.

The typical day starts with driving to work, gulping down cups of coffee, munching on donuts, while sitting in the cubicle the entire day. On the way home, we pick up take out food, and then sit on the couch for hours to watch TV, or surf the internet until it’s bedtime.

I’d Rather Sit
Being sedentary is the trend of the highly advanced, high income countries, where the economy is driven by advanced hi-tech information. Most of these working adults, spend their entire day hunched forward, staring at their computer screen until the headache sets in.

Sitting while working has become a way of life for the modern man or woman, which may of seemed almost impossible for our ancestors a century or even a few decades ago, to comprehend.

A century ago, we humans were primarily hunters and gatherers, always on the run, eat or be eaten. The body thrived on extensive labor and daily physical activity, where it functions the best.

Our basic human body today hasn’t change that much physiologically. We still need activity, so it’s shock therapy for our bodies and our minds, as it needs to adapt to our current sedentary lifestyle that we experience today.

And The Solution Is… Exercise
What the latest estimates suggests is that there’s now more than 5 million people who dies globally each year, this because they fail to reach the minimum recommended daily activity level, which is just 30 minutes a day, 5 days a week, 150 minutes per week.

No Really, I’d Rather Just Sit
If you fit the profile of the average worker of millions of others worldwide, you’re then sitting stationary for more than 8 hours every day.

Making a concerted effort of just attempting the minimal requirement of physical activity, seems like capital punishment for many. A drastic lifestyle change. It sounds too much like exercise.

The good news is you can break down this total exercise requirement into smaller segments, one that’s tailored to your daily routine, your daily ritual of working. Begin by doing nonthreatening activities such as walking to work. Take the stairs instead of the elevator.

Decide To Participate
The biggest excuse is that your schedule is too hectic, and that you’re squeezed for time, which is justifiable. Realize that there’s no need to block off 60 minutes every day to work out. What you can do is assemble a total of this 60 minutes throughout the day.

Try waking up 30 minutes earlier every morning to do aerobic exercises, this first thing in the morning. What doing cardio such as riding the exercise bike for 20 minutes, does is activates your creative juices to get the day going.

Accumulate 60 Minutes Per Day
What’s been recently discovered is that if an individual remains active for at least the minimal recommended 60 minutes per day, doing so can reduce the risk of chronic illness and long term health issues significantly.

The biggest damage that you can do to yourself is sitting stagnant. All that’s needed is to mindfully begin to move the body more, to workout the muscles, heart, and cardiovascular system.

The study found that what doing moderate activity for a hour every day, is sufficient enough to eliminate the increased risk of failing health, that’s associated with sitting for 8 hours per day.

Unfortunately, what’s known is that 75% percent of those studied, failed to reach even a portion of this moderate exercise time, by remaining inactive.

The Greatest Risk Of Declining Health
The profile which posed the greatest risk of early health decline leading to ones demise, is someone who’s completely physically inactive, this regardless of how much time they spent sitting.

These are those who failed to move their body at any point during the day, which strongly correlated to chronic illness.

On average, those who were the most inactive had a 44% percent more likely chance to experience serious health issues, when compared to those who were more active. When it comes to mortality risk, physical inactivity is closely associated with smoking and obesity.

Living In The Digital Age
The double whammy of this sedentary digital age that we live in, where many will sit alone for 8 hours a day in front of a flickering computer screen, is that most will also do the majority of their socializing on social media, Facebook.

The reason why the medical industry is booming is because our bodies aren’t designed or accustomed to being so sedentary, or being isolated behind a desk. Humans need to move around more.