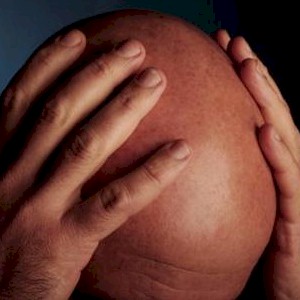 Losing one’s hair and going bald is an unwanted circumstance which usually confronts the majority of men, but is common in women as well. There are reasons for this, mostly a malady of the aging process and hereditary. Hair loss leading to baldness can occur at various stages of one’s life.

So because it’s inevitable for many, what’s more important is knowing the ways to combat or delay the balding process, or at the very least accepting and adjusting to it.

We all begin to lose our hair, so if you’re going a little prematurely bald yourself, it’s most likely your genes which are to blame. The medical term for this as androgenetic alopecia, which is the most common reason for hair loss.

Since it’s usually genetic in origin, you can thank your ancestors. The hair will usually begin to fall out since the root of the hair follicles becomes too sensitive, this because of the lack of hormones which circulates in the blood.

The culprit is identified as the dihydrotestosterone (DHT) hormone, which is generally responsible for the onset of baldness. What the DHT hormone does is it shortens the phase of the healthy hair which grows, while increasing the actual resting phase of the hair growing cycle.

The result is the shrinking of the hair follicles, which then leads towards finer shorter hair to progress, and eventually the entire hair growth process stops altogether.

DHT is the cause for hair loss in women as well, but the incidences are lower and may be inhibited because of the presence of certain female hormones, the most common being estrogen. This is the main reason why female pattern baldness is a lot less frequent and not as obvious as male pattern baldness.

Hair loss has also been associated with extreme stress, auto-immune disease, extreme anxiety, thyroid disorders, and drug use. There’s even a form of hair loss which is caused by wearing ponytails, the medical term being, traction alopecia, which is too much tugging on the roots of the scalp.

So whatever the cause may be for your thinning hair, there’s no reason why you shouldn’t consult with your family doctor to find the root cause, and how you can effectively remedy the situation.

Medical Drugs And Lasers
The Minoxidil and Rogaine products are blood vessel dilators, while finasteride, or Propecia, are anti-androgen, which is synthetic. They are all medical hair solutions which has been approved for treatment of hair loss, this however just for men.

Neither of the treatments is a magic bullet elixir solution. But if your doctor approves you of their usage, they at the very least can potentially delay, or at times reverse the hair loss to an extent.

Stimulating the scalp with lasers is another medical option. The laser beam is a low emitting light, which is safe, and stimulates directly on the follicles while helping better blood flow to the scalp.

The majority of the laser treatment systems however works just on the existing active follicles which are still producing hair. What it’s not able to do is hair regrowth in the already bald areas.

Cosmetically Covering Up Bald Spots
There are some good, as well as some tacky options when it comes to covering up the lost hair. The worst, yet most common, and usually the receiving end of most jokes is the classic hair comb over. This technique being you grow your existing side hair long, and then just combing it over the bald spot.

Not a surprise that this doesn’t fool the ladies or anyone else. These comb overs in adverse weather conditions are also prone to flip downs, exposing the bald spot and leaving the hair dangling.

Another option are toupées, which can use fake coarse hair, or are the wrong color. Unfortunately, this doesn’t fool anyone either. So it usually comes down to, just go “chrome dome” bald and be proud, or look silly.

One option on the market is a cosmetic solution which is known as DermMatch Hair Concealer. This is a cosmetic product which you apply with an applicator, which effectively reduces the color contrast between the bare scalp and the hair.

What it does is it colors the scalp to match the hair. DermMatch is water-resistant, but is known to fade over time, especially when continuously exposed to water. This product is recommendeded only for those areas where there’s at least 25% percent of hair density.

Hair Replacement Systems And Plugs
Natural looking hair replacement systems are made either from a mixture of nylon synthetic or real hair. The best ones on the market are secured firmly into place by either using strong tape or surgical glue. They will as a result stay secure in place under any wind or water conditions.

Hair plugs, also known as: hair grafts, surgical hair transplants, or surgical hair restoration, is a procedure which involves the removal of healthy hair follicles from the rear of the head, and then grafted onto the bald areas of the head.

Bald Is Beautiful
If you don’t like any of these solutions, then just embrace and accept your hair loss rather than attempting to hide it. This obviously is an easier option for men than it is for women, but there’s ways to make it work.

Men can completely shave their remaining hair a la “Stone Cold” Steve Austin style. For women, going completely bald provides the option of wearing a wide variety of fabulous looking wigs, the key being not scrimping on the quality.

However that you decide to cope with your hair loss, you shouldn’t be embarrassed or apologize for it. It’s understood that baldness is a part of life and makes up who you are.