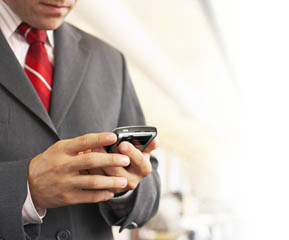 The majority of us now own some type of mobile device such as an iOS or an Android Smartphone or tablet, and most likely use it for business as well as for personal use.

It wasn’t that long ago when the smartphone seemed like an expensive luxury upgrade item for the ultra geek. But their appeal is now wide spread worldwide as the cost has significantly come down and the hardware functionality has improved. Almost anyone can now afford some type of mobile device.

So because of this mainstream popularity, there’s also been some security flaws which were discovered in certain mobile based devices, so there must also be some other issues right? There must be some risks that these mobile devices poses when their on workplace networks.

The Risks Of Mobility In The Workplace

Can Smartphones Be Compromised
It was a news item not too long ago where a college was notified of a device which was on their so thought secure corporate network which was able to somehow scan external IP addresses.

In the PC world, that would usually mean that there was an irate hijacked phishing PC which somehow made its way onto the network, and the tech department would be able to locate it and remove it.

But in this particular case at the college, it was discovered that it was a remote smartphone which was connected to a wireless network. So there was a rogue app which was installed on someones smartphone and even the owner was unaware that the mobile device was scanning the network.

Rooting Or Jail Breaking Smartphones
The majority of the smartphone manufacturers will “restrict” their end-users so they’re only able to install apps from their “pre-approved” marketplace specified by the manufacturer. They will also prevent the end-users from gaining access to the operating system on the mobile devices by their warranty being voided.

Rooting, or more commonly known as “jail breaking” a smartphone however, which obviously circumvents these controls, will grant full access to the OS guts of the device. This opens up a huge risk as any rogue app can then gain root access to the Operating System, and the user may potentially end up revealing their personal data.

Leakage In Connectivity
At one time not that long ago, your mobile device used a specific wire cable which would be used to physically connect and then transfer data or backup your phone’s data onto your PC.

The majority of the smartphones and tablets now support Wi-Fi, Bluetooth or USB tethering. For enterprises, this can prove to be a bit of a nightmare for the IT staff as all of these mobile devices are capable of exposing potential security holes on their networks.

Wi-Fi tethering can be used by the smartphones to access all of the blocked websites during business hours. Also, for mobile devices of the future, there are plans to have near field communication chipsets which will allow for pairing, sharing and direct transactions between NFC devices.

What About Those Software Security Flaws
A smartphone is now an extremely powerful personal computer which fits in the palm of your hand. They also require an operating system along with apps to make them useful and functional.

The majority of this is pretty much transparent to the smartphone owner and most won’t even bother about upgrades or updating their OS or the apps on their mobile devices. As more of these applications are continuously being installed, there’s the increased risk of also installing potentially known, unknown or undetected flaws or even viruses in the software.

So it’s recommended that you perform regular and constant backups of your personal data, as well as resetting your mobile devices back to factory defaults every few months or so, and only installing apps which you actually use or have been tested.

Potential Of Data Leakage
Say that you’re current smartphone is equipped with 16GB of storage and you’re most likely also able to add an additional 32GB by using a micro SDHC card. Now that’s a lot of space. Since these are just regular storage devices, you’re also able to easily place your personal or any other data on it.

So if you’re also able to access file shares on your workplace network, you could potentially extract massive amounts of private data by disconnecting and then going past the secure enterprise firewall and loading sensitive company data on your smartphone.

For Business Owners
As a business owner, if you’re concerned about smartphones or any other mobile device such as tablet PC’s connecting to your network, there’s a few steps which you can take.

First, you should be considering an authentication mechanism such as “802.1X” which requires all users to identify themselves before they’re able to gain access to the company network servers.

Once a user is connected to your corporate network, you can, as well as should track what they’re doing. You can begin by locating your network core and then begin to implement a network monitoring solution.

You can then look for and track the top users who are downloading any data from your file-shares, business applications or databases. Deep packet inspection technologies are also now able to detect wireless mobile devices which are on your network.

You’re able to do this by extracting the web-client info from the network packets. You can then use this web-client data to identify what type of device or system is on your network and downloading the data.